So I got Rook by J.C. Andrijeski from NetGalley, and I started reading.  As I did I went to look it up, for curiosity to see when it would be available for sale and found out that it isn’t an ARC as I suspected but a re-release from 2011.  Yep and there are already 7 books in the Allie’s War series and 3 novellas out.  They are for more mature YA audiences with stronger themes of torture, sex, rape, war, genocide, all make for an interesting story for sure but if you are a bit of a light weight be warned. 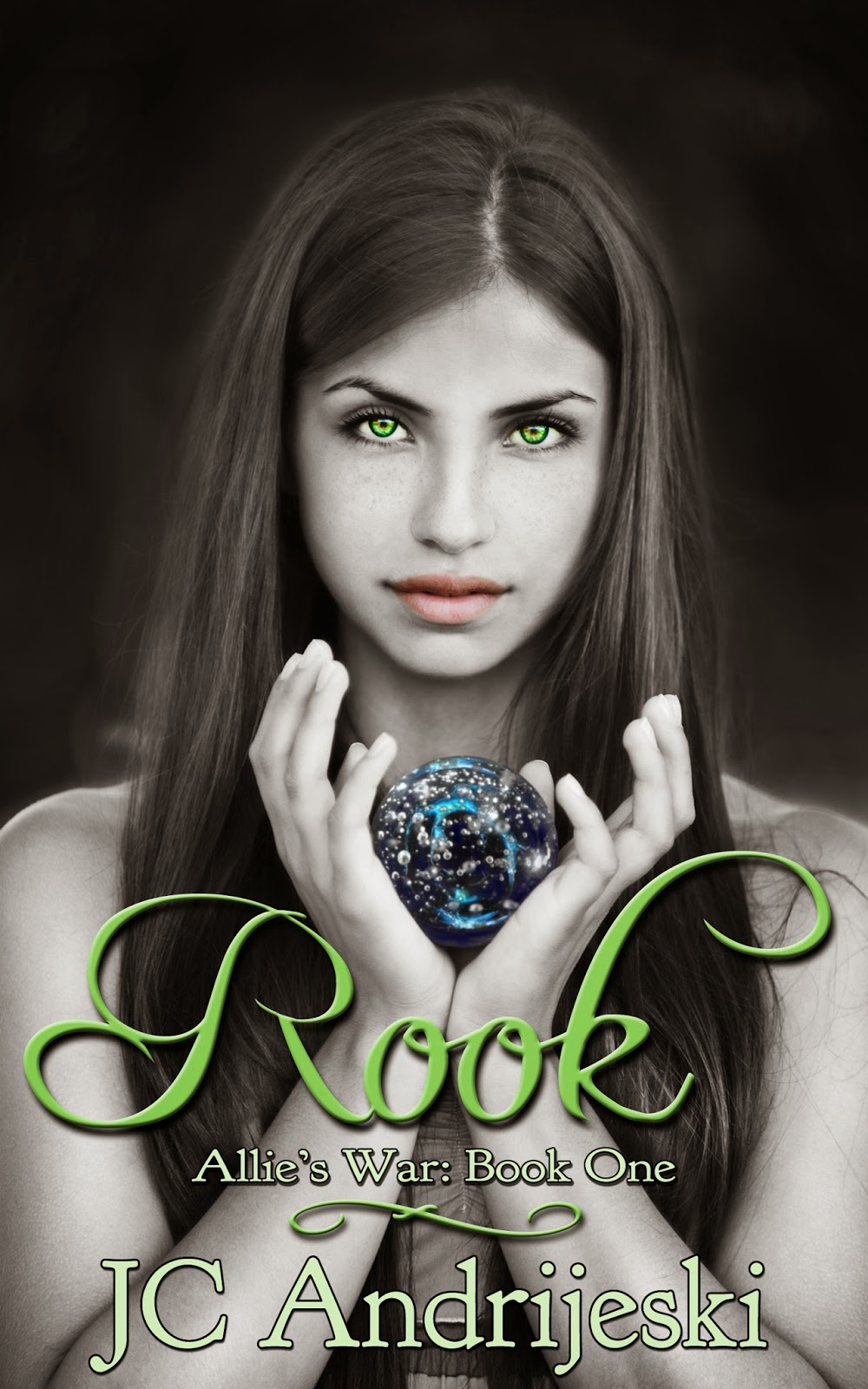 Now knowing me, and my inability to wait for things…I am currently reading book 5.  I finished this one a while back, 2 weeks I think, but I didn’t write my review right away because honestly I wanted to know what happened next and just kept reading.  These books are long, longer than most of the books I have been reading as of late so it took longer than I expected and I have taken a break to reflect and update my blog with some reviews.  I’m behind again.
The story is pretty original, with supernatural elements with a new race Seers that come with this own rules and quirks and differences.  The books also deal with a lot of mythology and fate vs. free will.  Are you destined to do one thing, can you change destine or are you fated to a certain path?  I liked that and it has some pretty interesting characters who…well they change A LOT over the course of each book and the series thus far as a whole.  Some moments you can’t stand someone, then something happens, and you rethink your opinion of them.  It’s a rollercoaster.
Now when I say the characters change a lot and develop that is an understatement.  I can’t give much detail without ruining the story but our main character Allie is new to this whole world.  She knew about Seers but had no idea she was one…or how it could be possible in this day and age given all of her tests.  So she has to struggle with that and how every move she makes seems wrong and the one person she knows is trying to protect her, confuses her with his odd behavior and half truths.  New world and she is the Bridge, this important being that everyone respects but she doesn’t understand the importance of that and is still programmed with the prejudices from her human upbringing.  Then we have Revik who is confused himself with his conflicting emotions.  He fights his natures, holds secrets when honestly would be so much easier.  Plus it seems many of his misunderstandings with Allie and her intentions should be cleared up when he can read her thoughts, clearly confused, but he’s so awkward it doesn’t seem to matter.
And there is a good bad guy, Terrian.  I mean that in a way that is hard to be.  There are so many way a bad guy can simply be just that a bad guy, the evil one for the purpose of the story and not be something else.  To be a real good bad guy, for me anyways, you have to have more going on, a complex personality that I still hate because, well you’re evil, but I can appreciate you better as a character for having depth.  Not to mention her human friends and family, Cass and Jon, find their lives changed as well knowing their friend is now something different and everyone is out for her in one way or another and that means they are at risk as well.  Like I said there is a lot going on in each book.
Rook manages to keep the pace moving along and keep things going and there is always something happening.  I’m a little fuzzy about one small part but it may have been my eagerness to keep going that I missed a small piece but that didn’t hinder my enjoyment.  Learning about the new rules of the world with Seers and the government in a world where they exist.  New things like the barrier and light bodies, all visually appealing.  Seeing things differently when looking at it with light.
My only complaint with the book was that it made me feel like a slow reader.  I normally read through my lunch hour at work and I can knock out a good 10-20% of a book.  I would manage like 3% and at first I thought it was me, that my reading speed was really getting off but then I looked and realized this book, all the books thus far in the series, are all twice the size of the books I’ve been reading so that explained that.  So my real complaint was that most of the chapters are a bit longer, which isn’t too much of a thing but it makes it harder to try and rationalize one more chapter before bed when it doesn’t take 45 mins to read one chapter is all.


Overall I enjoyed this book and give it 5 Stars, clearly I liked it as I’m currently on book 5.  Bright side is no waiting for the next book right?  Well not so much I did some research and found out there are at least 2 more full books planned and 2 more novellas…hopefully the wait won’t be too long.  I don’t know if I will be able to post much of a review of the others as I would give too much away, but feel free to always check out my goodreads page as I’ll be posting them there slowly but surely.
Posted by Eve at 9:39 PM