Hello happy readers!  So this post is a day late but I was out of town yesterday and it wouldn't let me post via phone so….an extra post today.  Yesterday was the release for Shattered Pack (Alpha  Girl #6) by Aileen Erin and as you may know I LOVE this series!  Seriously I read each book in one sitting and then as soon as it's over wish I had more.  This was no exception.  I have previously reviewed the other titles: Becoming Alpha, Avoiding Alpha, AlphaDivided, Bruja, and Alpha Unleashed.  There are spoilers for the previous books, duh. 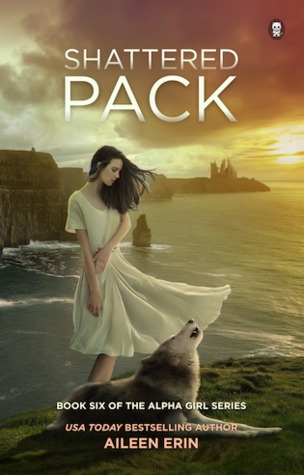 In Shattered Pack we follow Meredith this time around instead of Tessa.  I loved Meredith from the first book on and when she found her mate Donovan, Alpha of the Celtic Pack….I was so in love with him.  So a book with them at the center was totally something I needed.  So when we let off our gang had faced down Luciana and her hoard of demons and come out on top but they also exposed themselves to the public.  This makes things a bit uneasy as the world comes to terms with it and the different communities are rattled with the exposure.  Donovan is stretched thin between his job as an Alpha and as one of the Seven already but add in this mess and it's hit a breaking point.  His pack isn't in the best shape but when he gets the call that his second has been murdered they head for Ireland.  Not an ideal time given the tensions but even with some exes and not so friendly welcome Meredith is there for her mate never one to let a few angry wolves stop her.

Again I love that we get a book focused on Meredith and Donovan.  I loved them in the previous books, I mean I imagine him with the accent and….well yeah.  But Meredith is such an amazing character.  She is so strong and sweet.  She loves her friends fiercely and believes friendship outranks everything else.  I love that about her.  Donovan is so powerful but he doesn't flaunt it and is really just a softie.  They really balance one another out.

We get to see more about the world at first, how the normal world is dealing with the whole news of supernatural.  Things have been flipped and the school they call home isn't safe so we go home with Meredith.  Getting to meet her family and know the pack she has been a part of outside of her satellite pack was great.  Her family is serious business.  It makes sense why Meredith is the way that she is, strong, fierce, and loving.  Then we shift to Donovan's pack and it is a completely different story.  They have been largely without an Alpha for so long as he had been stretched thin with his work for the Seven and things have fallen into disrepair.  To see the contrasts was great.  I also loved how Meredith went in knowing it would be dangerous but also knowing this was an important part of the man she loves so she wants to make it work and improve things.

There was lots of everything we love in these stories from romance (Can I say enough how cute Meredith and Donovan are together) to pack politics, mystery, suspense and tons of action.  There is so much happening you can't put the book down for a second.  From getting to know some new players to seeing our old favorites it flew by and as always I need more.  I can't wait for book seven in the series and I'd be happy to follow any of our couples around but I can't wait to see what happens with the Celtic Pack.