Pretty Dark Nothing by Heather Reid


It seems like forever since I got to review an ARC which makes this even more exciting for me.  Plus I have some thrilling stuff in store for my blog but more on that once I get it settled.  In the mean time back to that ARC I mentioned.  Thanks to NetGalley and the published Month9Books I got to read Pretty Dark Nothing a debut novel by Heather Reid. 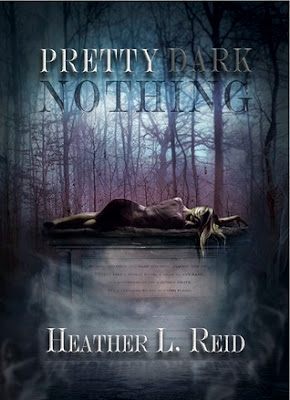 It's been 3 days since Quinn has slept for more than a few minutes here and there because demons have invaded her dreams, stalking her and whispering about her death.  Lack of sleep and fear are ruining her life.  When Quinn doses off in the hallway at school, Aaron an amnesiac with a  psychic ability and a major crush on her enters her dream and feels something unknown and familiar at the same time.  The demons are set on destroying her life in every way, to take away everything she wants most.  Does the past he can't remember hold the key to Quinn's demons and can they both figure it out before the demons do more than tease of her death?

The premises sounded interesting, sort of like Freddy Krueger with dreams/sleep but with a YA twist.  The story is told from both Quinn and Aarons prospective which helps  round out the book.  It also can be horribly frustrating at times if you get invested in the characters like I do, then you obviously know more than each character does so when they do something that clearly goes against what you know you think, 'No no no, come on….'.  Then again that is what makes reading so much fun, when you feel personally responsible for the characters you read about and that was difficult in this book because I was conflicted about Quinn.  Inside her head I understood why she did the things she did and how she thought, fear, uncertainty, and love, but when you see the effect from the outside that her actions have on others I wanted to strangle her.  I like hoe the main female character is screwed up, royally, she has issues she screws things up and even when it made me yell at my kindle I still liked that.  The same thing goes for Aaron, he's brave and stoic and harboring a major crush always wanting to save her but at the same time he is a guy and he has mixed feelings and he doesn't know what to do with them.

The creep factor was also turned up to a 9 (in a good spooky way) with the demons slipping from just her dreams to her reality.  Talk about a living nightmare.  Demons voices telling you all your painful and horrid fears are true while slowly torturing you is enough to make anyone question their sanity.  Add to that high school drama and a not so perfect family life.  I can imagine the shrinks face to meet someone like Quinn.

I won't give anymore away just that if any of this caught your attention you should check it out of course.  I give it 4 Energy Drinks.  Pretty Dark Nothing comes out tomorrow April 23rd.  As usual leave any comments, thoughts, concerns below.

Coming Soon:  The Raven Boys by Maggie Stiefvater
Posted by Eve at 10:02 AM No comments: