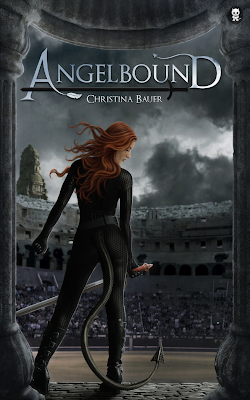 First off, Merry Christmas everyone!  I have been swamped the last few days with cookie orders and finishing up Christmas.  Though the wrapping I was behind on I was doing for my mother, so I am not to blame completely.  Anyways, have finally got a few minutes free that I haven't passed out right away, to put my thoughts on a new book to paper.  Angelbound by Christina Bauer is an ARC from NetGalley and Ink Monster LLC and came out on December 17th.  The following is a brief summary and my thoughts to hopefully spark your interest.
Angelbound is the first in a series that centers around the world of Purgatory.  A place where quasis (part demon/ part human) live and are ruled like slaves.  Myla is one quasi who is called to fight in the arena, battling souls who want trial by combat for the right to enter heaven or hell, and she has yet to lose a battle.  She unlike many other quasis loves it, has for the 5 years she's been at it.  A good fight has always been enough to lift her spirits when her mom is acting strange or anything else gets to her inner wrath demon, but in her senior year or Purgatory High it's not enough.  Demons are starting to act weird, so much so that the King of Hell shows up at her school, she can't ignore that things are changing.  As she starts to question everything around her, life, the way things are, the past, her father, she meets the obnoxious demon hating Thrax High Princ Lincoln, a sexy half human/half angel demon hunter.  But what’s a  quasi-demon girl to do when she falls for a demon hunter? Her pension for breaking the rules and moving to her own beat Myla is ready to shake things up in Purgatory. 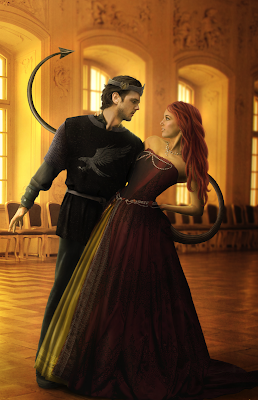 First I have to say the cover caught my eye.  Simple yet intriguing.  A girl with a wicked looking tail standing in front of a dark Spartacus like arena.  A book promising action, and a description that also spoke of love.  I was in.  The idea of ghouls, quasis, thrax, demons, and angels, all thrown together in a melting pot seemed interested.  We get to stay inside Mylas head as she goes through the self discovery and crazy Earth, or well Purgatory, shattering stuff.  It's two different people who are from completely opposite worlds, literally, who despite logic and reason have an attraction that could cause unrest on top of the already unstable and unraveling world around them.

I feel confident giving this book 5 Stars easily for mixing so many components into a great story that was fun and quick to read through.  I couldn’t put it down.  I hope you all will give it a try and delve into this new world.  Already read it, tell me what you think in the comments below.
Posted by Eve at 1:01 PM No comments: 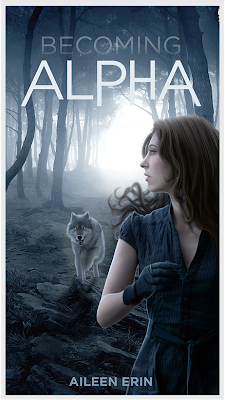 Becoming Alpha by Aileen Erin is a different side to the werewolf genre.  It's a story about love and finding a place you can belong.  When you already consider yourself a freak what's being turned into a werewolf really going to do for your status?  And who knew one kiss could change your lift, literally.  This book is an ARC from NetGalley and Ink Monster LLC and came out on December 17th.
Tessa is a not so normal high school girl with this uncanny ability to get visions from touching people or stuff.  She can get the story behind things, so vintage shopping is a horrible idea.  Gloves will only get you so far.  Then when her father accepts a new position at a school, St. Ailbe's Academy, and they move their life from California to Texas she has the chance to start over.  When Tessa meets Dastien, a hot teachers aid who used to attend the school everyone in town seems to know something about but won't share, she starts to have feelings like she never did before.  The universe pulls them together and you'd think the worst that could happen from a kiss would be a vision, wrong.  One kiss and she ends up a new student at St. Ailbe's Academy, a school for werewolves.  Now she must sort out her new life, knowledge, and feelings for the guy she liked who also is sending mixed messages.  Her life went to a whole new level of complicated.  Throw in attacks on the school and you have a whole slew of problems.
For me, Becoming Alpha was a quick read.  There were different things going on all at once.  This wasn't just a werewolf book, it had a good range of characters and subplots that all worked together to meld into an intriguing story that fulfills that fantasy inside you and leave you wanting more.  I wanted to know what was going to happen next.  How would she handle what was thrown at her.  I liked being inside her head and seeing how Tessa dealt with everything that popped up.   You also get to learn about other wolves at the school and the hierarchy system there.  Throwing a new girl in who only just found out, verses who was raised on the information.   You also have family, both natural and pack, what it means.  And again, if I didn't mention it, boy trouble.  Because come on that is already a lot to process.


I wouldn’t want to give too much away, so I will leave you there.  I hope my readers will check out this book, it came out yesterday, December 17th, when it comes out.  Please, share your comments below!
Posted by Eve at 11:13 AM No comments: 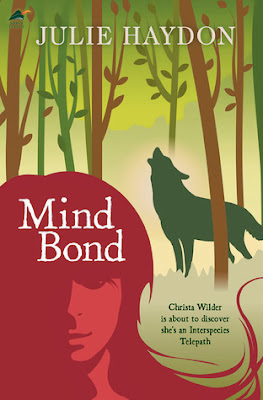 Mind Bond by Julie Haydon is an ARC I received from NetGalley and Feather In Cap Publishing Pty Ltd.  This is a story about an adaptation in the future that allows some people to 'mind bond' with a wild animal (IST's Interspecies Telepaths).  But don't be fooled there is so much more to this book than one girl bonding with a wolf, but the whole world of things between the pages.
We follow Christa who lost her brother when she was little, he disappeared, and after such her family moved from the country to the city.  She left behind all that made her so happy and connected to mother nature, and slowly stopped visiting as much as she grew and life happened.  Until one day she is browsing and sees something that makes her yearn to go back and spend some time camping.  So with her pure city boyfriend, and much more open minded friends, Christa heads back to the protected park where something awakens within her.  As Christa embarks on her journey to spend more time being where she feels most comfortable her connections shift.  Her life evolves yet again as she tries to rediscover what it is that makes her happy.
In the park she finds herself happiest.  Then of course she has her little wolf pup, Magnus.  This story is not solely around the mind bond that Christa has with Magnus, however, cute that is.  I won't like I've never been a huge outdoor type of girl but I do love the look of wolfs and their intelligence, so the idea of being connected to one is amazing.  With the mind bond you see the journey that Christa goes on in adapting her life, juggling musts with wants, and the other drama that pops up along the way like a mysterious stranger that shows up in her life or the poacher on the reserve.
As I said this isn't a book with only Christa and Magnus, I was also pleased to see how well flushed out the other characters were.  Other IST's, her family, friends, everyone seemed to be given something to make them memorable and unique.  Not as if they were there solely to move the plot along but to build the world and show a different side to our main character.
Mind Bond leaves the book with an end, but also so much prospect for more though I have yet to find any information if there is going to be a follow up or series (but if you know something I don't please share).  Also as the characters are all in their early 20's I don’t know if I would classify this as a YA book per say.  I would include this in the new category I recently heard people discussing as 'New Adult', which is a cross between everything we love about YA and slightly older characters and slightly older themes.  No matter the classification, I gave Mind Bond 4 Stars.


Mind Bond came out October 1st and is ready for you to check it out.  Would you want to be an IST?  If so what animal would you want as your partner?  If not, why?  Already read Mind Bond?  Share your thoughts below, I'd love to discuss this with everyone.
Posted by Eve at 12:20 PM No comments: