Charming is the first book in the Pax Arcana series by author Elliott James.  I got this ARC from NetGalley and Orbit Books/Hachette Book Group.  Charming comes out next week, September 24th. 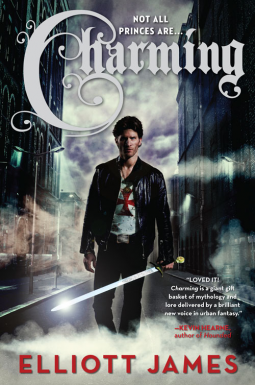 John Charming isn't your average Prince… the tag line brings me in instantly because let's be honest who doesn't love a good fairy tale story with a Prince Charming.  So a book called Charming with an attractive man on the cover wearing a leather jacket and carrying a sword, I have to check it out.  The style of the book is different, it's from John's POV and he is critical of everything as he is telling us what is going on.

He comes from a line of Charmings, not really a Prince, but a family of knights dating back centuries.  Trained by a modern day version of the Knights Templar, monster hunters who have updated their methods from chainmail and crossbows to Kevlar and shot guns, he is one of the best.  That is also why he is an abomination and his own brotherhood of Knights what him dead.  On the run from his own people yet sworn and compelled to keep to his mission to protect the Pax he lives a life on the move, trying to find a quiet and peaceful life.  That is until a vampire and a blonde walk into his bar.

Yes it has jokes and cheesy lines but that is the appeal.  It is through John's perspective and he has been around a long time, long enough to know that sometimes you just have to make a joke out of things to keep from cracking.  He has been on his own for so long and feels if he does get close to anyone they die, which is good incentive to stay alone, if you ask me.  That doesn't matter though when he ends up pulled into a misfit band of monster hunters to bring down a particularly devious vampire coven who are disrupting the Pax.  It also doesn't help that he is drawn to the attractive and powerful blonde that walked in, trouble is she's taken but someone who could bring the Knights down on his head.  However, what makes him an abomination, also makes him very useful for their purpose.

I liked this story.  It was a quick read and I finished it in a couple of days reading on lunch breaks (I am no longer able to read at work sigh) and a little at night.  It does not get bogged down in anything and does speed along.  The action scenes are very well thought out and choreographed.  I also got the distinct feel of being in a mans head, I think the author being a male is able to portray the thoughts and feelings of one in a way that women writing from a mans prospective are unable to do with such ease.  Though they say right what you know right.

I enjoyed Charming and his jokes and sarcasm.  His paranoia, though really is it paranoia if people are out to kill you, and his hidden fears and feelings.    The rest of the gang are very interesting as well, each with their own story as well.  Sig, and her secrets and dilemma, Dvornik, and his psychic abilities and his anger issues.  Parth, Cahill, Choo, and Molly all with their unique stories and attributes.  I have to say Molly and her fascination with Christmas as a de-stress/calming effect in the middle of the year made me laugh and send a caption to my friend who despite the 100+ temperature is always chilly and wanting to sing Christmas music.

Then you have the world.  It's just like the world we all know, only that’s because of the Pax.  It is like a mental barrier, us normal folks just don't see what is really happening in the world and if we catch a glimpse of something not right, we rationalize it away or blame the lighting, lack of sleep, etc.  It was an interesting concept and I have to admit I enjoyed it.  I also like how the Knights came to be, not the typical brotherhood of demon hunters, but I won't give it away.

Overall I enjoyed this book and am interested to see how the story continues in the next book.  Again Charming comes out next week on September 24th.  If you like witty banter, inner struggle, and demon fighting, drama, and action I say check it out.  I give it 3.5 Kantanas.
Posted by Eve at 1:07 PM No comments: