So I’ve finished another great book.  This one is called Wanderlove by Kirsten Hubbard.  I received this book early from Random House Children’s Books on NetGalley.com and just finished reading it. 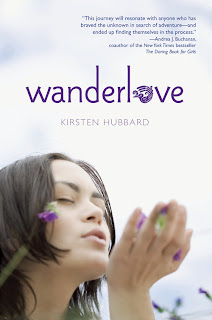 Wanderlove is a story centered around 18 year old Bria Sandoval.  After a breakup with her boyfriend and her passion for drawing seemingly lost Bria decides to book a trip to Central America and see the world.  This impulse leads to a guided tour that isn’t at all what she expects and hardly the key to self-rediscovery.
Then in town Bria meets Rowan, a real traveler, a backpacker who knows how to really travel authentically along with his sister Starling she seizes the chance to ditch the boring group and go off the beaten path.  At the start of their threesome journey Starling has to leave and sticks Bria and Rowan to travel alone.  It’s clear that Rowan has secrets and a past that is full of shadowy secrets.  Bria must come to terms with why she really ended up there and how to find a way to move on because you can’t run from your problems forever.

I must say I’ve always sorta fantasized about backpacking with a group of trusted people through countries and seeing the real stuff, not just the tourist traps.  But alas I am a creature of technology and comfort and never thought I could hack it as a true backpacker.  Still the idea of Wanderlove, the theory/idea discussed in the book, is captivating.  This book though, it depicted what I really think it would be like to be there.  The good, the bad, and the crazy.

The setting changes with each passing place on the journey but each one comes alive.  The waters so clear and beautiful I want to dip my toes in.  The towns, streets, hostiles, all described so realistically I could see it in my mind and feel like I was there because that’s as close as I’ll get.  I like daily hot showers, just saying.  Then there are the drawings.  Bria is an artist and even when she isn’t drawing she still thinks about it, describes it in her mind as if her hand held a pen.

Each character has their own unique attributes that make them their own.  Some may have things in common, some are stereotypes but that’s life.  I feel that if I ever were to get over my aversion to the lack of amenities that I would want to travel with someone like Rowan and Bria.

This book too me on a journey and honestly put something new on my bucket list.  This wonderful book comes out March 13, 2012 and I hope you all will check it out.  Let me know what you think in the comments.