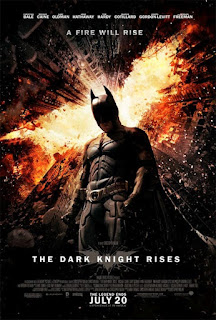 Okay so I was super stoked to see this at the midnight showing Thursday night and I would have posted before now but I was feeling rather irritable with the AC not working yesterday and not even remembering the joy that was the midnight showing could not help.  Now here I am though with my review.

So for those of you who live under a rock The Dark Knight Rises, is the 3rd and final movie in the Dark Knight series.  So…if you by some great miracle haven’t seen the others yet (shakes my head in disbelief) then be wary there will be spoilers for the first 2 movies.  Now for those of you who just haven’t seen Rises yet then don’t worry I won’t give away any major spoilers.  I promise.  Ask anyone who has known me for any amount of time and tried to get a spoiler from my lips…not happening*.

Now this movie picks up 8 years after The Dark Knight where Batman takes the blame for Dent’s final demented acts to preserve his reputation and keep the faith everyone had in him.  He became the monster the city needed him to be.  The years have not been good on Bruce either as he also lost someone he cared for.  Then a new force comes to Gotham and Batman is needed once again.

Yep, you guess it.  Bane.  Now I won’t lie I knew there was something familiar about Bane from the posters but honestly I never looked to see who the actor was.  Then just as I was sitting to write my review I had to make sure it was Bane and not Bain, can’t have that, I found out it is Tom Hardy.  Wow had no idea but now I see the similarities once I knew it.  Anyways, Bane was awesome in his bad ass way.  He was a cool foe and let me just say that mask thing really added to the creep factor.  He was everything that a good bad guy should be to me, he was strong, dangerous, smart, and oh so psychotic. 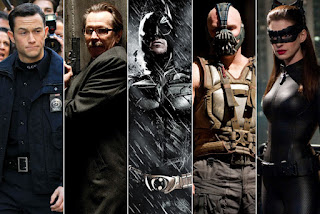 Now Bane wasn’t the only great performance.  Nope we have new faces of Catwoman and Blake played by Anne Hathaway and Joseph Gordon-Levitt.  Now my old favorites are there too like Michael Caine as Alfred and Morgan Freeman as Fox and Gary Oldman as Commissioner Gordon, wonderful group.  And if I need to say it as well then well…Christian Bale as Batman/Bruce Wayne, though I think that goes without saying.

Now the story in this isn’t completely about Batman.  Like the others there are multiple story lines going on that meld into one larger story.  Now this movie runs at almost 3 hours and I never felt bored.  There was gripping stuff, tear jerking moments, and the amazing action we come to know and expect.  The cool gadgets of Batman continue from Fox’s special department.  Yes the story continues to unravel and you see things from the other two films tie into this one.  There are twists and turns and great shocks and action throughout the journey and I had a blast. 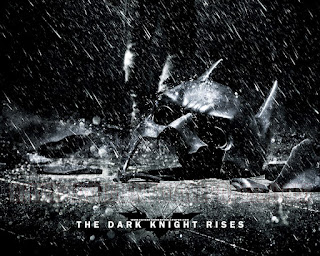 Let’s see great acting, check.  Amazing story, check.  What else?  Oh so much and I could write for a long time about this but I think I will leave it with just one more thing.  The look.  The look of everything on there was so amazing visually.  I do admit, and my movie partner in crime (one of them anyways) pointed out that this movie wasn’t as dark as the others having more daylight stuff.  This is true but it did give a new feel to Gotham.  A new way to see things.  Plus the actions, the explosions (come on what would a movie be without explosions), and chases so much fun to watch.  I think they have a home run.

The only thing I will say about the ending of the movie was that I find it fitting.  See I managed to make it through a whole review without any real spoilers.  If you didn’t know something I put then you clearly didn’t watch the first two movies or seen the previews.  Now I suggest you go out and see this movie ASAP and then tell me what you think.  I can’t wait to see it again, and look forward to when it comes out on DVD and I can do a Dark Knight marathon.  With that I end this review with my rating of 5 Bat signals in the sky.

*Yes I have to amend this as two friends of mine did manage to get a spoiler out of me once.  To be fair it was a reward if they could solve a puzzle.  So yes once I did.
Posted by Eve at 11:59 PM