The Expendables 2 & The Bourne Legacy


So I was wondering why no one had said anything about my last double feature and then realized that I never got to post it.  It’s been sitting here for a few weeks, had some internet issues and sigh I’m saddened to admit it but when it finally came up I forgot to post it.  So a little late but better than never, right? 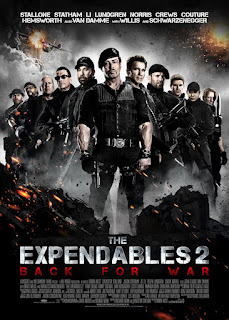 I finally did get to do my movie double feature.  I saw The Expendables 2 and The Bourne Legacy, the two biggest movies out at the moment (obviously a clear indicator I am behind in posting).  They are both sequels that seems to be a theme of mine and action flicks.

First lets dive off into The Expendables 2 which features…well let’s face it pretty much all the major action stars of the past.  This movie is bloody and violent to the extreme for sure but in the best possible way.  If you don’t’ want that then I don’t see why you considered this one in the first place, perhaps you were lured in by one of the many big star actors.  Either way be warned.  This is a guys movie so to speak.  I admit the only females in the theatre came in with guys and didn’t look nearly as excited as their other half.  One man in a pack even declared there were no single women seeing this, to which I had to advise him of his mistake.  All good fun I know I have a different taste than most females, like ‘a girl’.

That being said I liked this movie more than the original.  There were so many inside jokes about the different action stars pasts it was great.  I had flashback moments to so many and giggled like a girl.  They even joked about the obvious things which made the movie for me.  They action was great and plentiful for sure.  There were guns, chases, explosions, and plenty of hand to hand al put together into one great action movie.

More than anything the plot of this one was simpler.  I felt more invested in the outcome.  Honestly, I like personal stories more than the overall do the right thing for the sake of doing the right thing.  It gives the action a more powerful meaning.  Don’t get me wrong I can totally enjoy random action for the sake of action but if story is set up to make you care, then I want to really care, I’m silly that way.
Any who I really liked the movie and totally recommend it to any action fans.  I give it 5 Skulls. 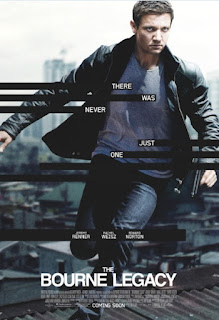 Now for Bourne, Jason Bourne…not really.  The Bourne Legacy follows Jason in a way but we learn Tredstone was just the tip of the iceberg.  This story centers around Aaron Cross, played by the beautiful Jeremy Renner.  First off I must admit, he is so pleasant to gaze upon (click here to read a vivid description from ‘a girl’).  Now he is different than Jason, he has his memories; he is just realizing how things work.  Also you see how they are as good as they are, genetic re-energizing of the cells.  Yep pills that enhance the body and brain.  Just saying I wouldn’t mind that.

I can’t really talk too much about it because it’s a movie following a complex plot and to give the wrong information away would be to give away a spoiler and you all know how apposed I am to that.  So I’ll just stick with saying if you liked the other 3 Bourne films you should totally check this one out.  Lots of intrigue and fast paced action, so would want these people on my side is all I’m saying.  It was just what I thought it’d be and wanted.

So there you have it a bit late and I do apologize for that but sigh I can’t help my internet.  I’m working on it but I’ll spare you my entire tirade about this company and my thoughts about them for the time being.  In the mean time I am reading and working on my review for the recently released and finished book.  Hope to post by weeks end.  As always questions, comments, rants, raves, please leave them below.
Posted by Eve at 1:06 PM

Email ThisBlogThis!Share to TwitterShare to FacebookShare to Pinterest
Labels: The Bourne Legacy, The Expendables 2