Wow so this last weekend I had the joy of seeing some amazing movies.  So here are my thoughts on those but first I have to say that I was surprisingly shocked watching trailers.  Most movies I know within a few seconds having already seen the trailers online and eagerly anticipating them.  Well before Pitch Perfect I saw a trailer that as soon as it started I was thinking how it reminded me of a book series I really enjoy and then I hear the name, Lena Duchannes, and knew it was what I thought.  I may have loudly proclaimed my discovery, that this was the trailer for Beautiful Creatures,  but no one seemed to care, clearly they didn't read the books and knew the excitement.  The trailer posted below is amazing and I can't wait to see it.

Now that I've gabbed on about the trailer before the movie let me jump right into the reviews of the actual movies.  We'll go in order as usual which means we start with Taken 2.  Squeal.  Yes, that is a very girly squeal because I have been super excited about this movie.  Now this movie follows up on the events of the original Taken, clearly, which was awesome.  If you have lived under a rock and haven't seen it yet, then I don't know what to do with you.  However, if that is the case you really should see it before the sequel.

Taken 2 takes place shortly after the first one.  It also has, gasp, the same people.  Yep shocking with so many films recasting and then butchering a great movie.  Not this one.  This one has the main characters the same with all the greatness of the original and more. 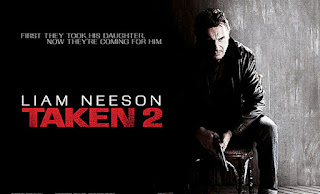 Now recap of the first, daughter is taken, but not before calling her father, who has a special set of skills, who goes on a mission to find her.  He finds the people who took her and works his way through them to find his daughter.  Yep he kills and tortures and everything necessary to do that.  Basically he kicks butt and takes names.

Jump to this one and well the families of those men he took care of are none too pleased and want revenge.  They don't seem to grasp that they were bad men and he was protecting his family.  Yep, so they happen to catch him in Istanbul post security job when his daughter and ex surprise him for a mini vacation.  It doesn't turn out to be the vacation they were expecting.

Sounds cool right?  Well if you answered yes then you would be most assuredly right.  There are great chases, fights, and a great overall story.  Also I must say I was super pleased with the daughter.  She has been through so much and she is scared and emotional but she is also determined like her father and doesn't want to be a victim and is ready to act.  She has grown as you would expect but not too out there she isn't suddenly some covert killer like her daddy.  Now, Neeson…what can you say about him?  He was wonderful.  He has this calm and calculating way about him while everything is happening knowing he will find a weak point in the face of danger but it's the normal things that mess with him.  He is super cool and you should know not to mess with him, he's angry.  Also I have to mention that I love how he yells without raising his voice, it's this deep force that is just ubber cool in my book.

So enough about that basically I'm giving this movie 5 grenades.  If you like action, Neeson, or Taken then you will love this so check it out. 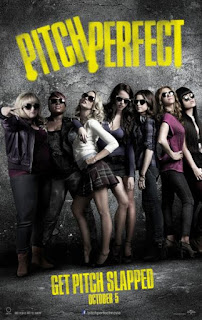 Now we move on to the next movie in my marathon, Pitch Perfect.  Warning!  Total girl movie ahead.  Yes my movies are like my mix CDs and the order never makes any sense to anyone by me.  Still the movie was super cute.

The movie is about singing yes but more than it sounds.  The description I read for it once did nothing for me and I had no intention of seeing it and then I saw the trailer for the first time and couldn’t believe they were the same.  Either way I knew I had to see it.  The music and story are fun and a great pick me up.  Yes it's predictable and crazy but it is cure in the best possible way.  I just looked it up and the songs/remix's are on the soundtrack with is pretty good.  I was tapping my foot along to the whole movie.

Acting wise I liked the chemistry and humor of the cast.  It wasn't a deep movie but they were all different and had their own little character traits.  If you want a good time, some tunes, and a laugh, check it out.