I know I’ve been sporadic the for the last few weeks and I apologize for that but not much time spent at the movies or even reading sadly.  I guess that has to do with both writing and getting ready for the holidays.  Alas, my good movie day buddy and I did one of our days and now I have four new movies to review for you. 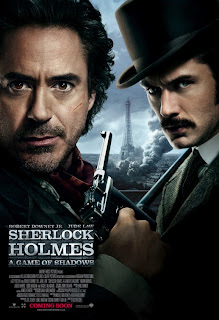 First we saw Sherlock Holmes: A Game of Shadows, which we were both excited about.  This movie we also had another friend who unfortunately couldn’t stay for the day, holiday shopping and all.  I should start this review by saying that I have never read any of the books or short stories so I had no expectation other than based on what I saw in the first movie.  My friend however did read the books and has her own opinions on some things which I’m sure she’ll share in the comments.
Holmes was my favorite movie of the night.  It had the level of intrigue, mystery, suspense, action, and comedy you expect.  I have to say I adore the way Jude Law and Robert Downey Jr. play off each other with their banter so well written but the acting in those moments you can’t help but laugh.  Everyone in my opinion did a fabulous job in this movie with their parts, playing them perfectly.
The story was good, for me what I expected from the previews; a game between two great masterminds.  Holmes is a genius but he’s also a bit crazy too which is what makes him so much fun.  He has an unusual way of looking at things and sometimes you’re not sure if he really knows what he’s doing but then he pulls it all together and you see his ‘crazy’ was part of an intricate plan.  Overall I found Sherlock Holmes 2, to be a fun movie and I can’t wait to get it on DVD.
Rating: 5 Stars 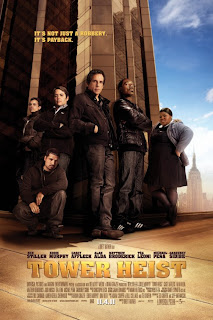 Next we have Tower Heist.  This movie was hilarious.  It’s also relatable in a Robin Hood sorta way.  Bad man takes your money to live the high life and you’re still supposed to treat him and cater to his every whim.  Ben Stiller’s character leads a band of ordinary people on a heist.  It’s so funny because they are normal people and not criminal masterminds so they are pretty much just guessing and making a bunch of mistakes.  You root for the ‘thieves’ because well let’s face it the guy is a complete ass but also because they are doing it for a good reason, to help others.  I don’t have much to say about this movie, it was cute and funny and I recommend seeing it.  It is very predictable but it’s a good time.
Rating:  4 Stars 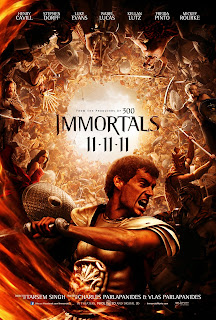 Now onto Immortals.  I like mythology so it was a given that I would see this at some point no matter what just to see it.  It is in the same style as 300, lots of blood and gore so if that is offensive to you then you shouldn’t go into this movie.  There is also a cast of yummy eye candy for the ladies, which is always nice.
This is the tale of a normal guy (Theseus) who just wants to protect those he loves.  King Hyperion is leading his legion of killers on a quest to find the Epirus Bow said to have been lost in the war between Gods and Titans.  He kills without mercy in his quest.  He is played by Mickey Rourke, who plays the role of pure evil sociopath with conviction.  The Bow is the only weapon that can set the Titans free for those who still believe in the myths.
See the Gods are having their own issues up in the sky.  No God can help the mortals or they go against the will of Zeus.  They can only get involved should the humans set the Titans free.  So Theseus is on a mission of revenge which he comes to learn things about himself along the way.  Along on the journey is the oracle Phaedra who has visions of what is to come.
It was pretty good.  Better than I expected.  It would be something I’d watch again but not in any hurry.  If you want a gorey action movie have fun.  Also memorable mention before I forget, Joseph Morgan (from Vampire Diaries), and Kellan Lutz (Twilight) and Luke Evans (Three Musketeers (2011)) were in the movie which was something of a treat.
Rating:  3.5 Stars 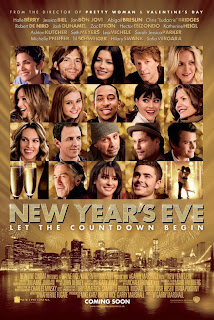 The last movie on our marathon yesterday was New Year’s Eve, which is ensemble movie.  It is slam packed with stars.  The movie centers around New Year’s Eve, I bet you didn’t guess that from the title, in New York City.  There are a bunch of different little stories that shift easily into one another.  Each is different in it’s own little way and fun.  If you like the movie Valentine’s Day then you’ll like this, it’s cute.  Not much to say about it other than that.
Rating: 4 Stars
Posted by Eve at 12:48 PM