What is it to be a friend? 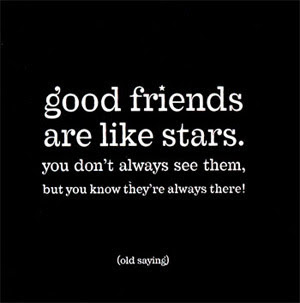 I’ve been thinking about this a lot as of late.  I originally started this post the other day when I was having a really bad day, you know the ones where everything hits you all at once it seems.  I never finished it but even though I am feeling much better I still think this is a post worth finishing.

Growing up a friend is such a simple concept.  Someone is either your friend or they aren’t.  Curious I looked up the official definition of ‘friend’.  I was surprised by what I found.

ü  A person with whom one has a bond of mutual affection, typically one exclusive of sexual or family relations.
ü  An acquaintance or stranger one comes across.
ü  A person who supports a cause, organization, or country by giving financial or other help
ü  A person who is not an enemy or opponent
ü  A contact on a social networking website 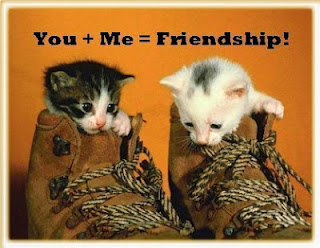 I guess I never before took the time to look it up.  I, as I’m sure all of you have, had my own ideas about what it meant to be a friend.  I didn’t realize that anyone who is not an enemy or opponent qualified.  Then again it does make sense in this day and age.  People want to be liked so much they want people to ‘friend’ them even if they may never talk to that person again or remember how they met or who they are.  I don’t claim to know every single person on my Twitter but to me I classify them as ‘peoples’ not friends.  Friends still means something more significant to me.
Am I still alone in thinking a friend, a real friend not to be qualified with anything (like ‘work friend’, or ‘facebook friend’, etc) is someone who is there for you when you need them?  Someone you know in one way or another and actually communicate with on at least a semi regular basis.  Someone who is important to you.  A keeper of secrets or just someone to make you laugh when you’re feeling down.  Is that crazy? 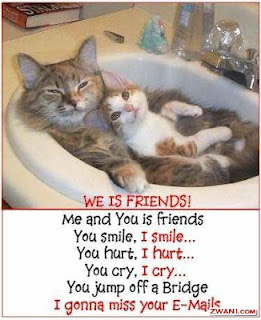 Technology allows us to expand this category from people we know from where we live right now to anywhere and everywhere.  I have people I’ve never met in person but via the internet but I still feel like I know them.  Some I have went on vacation and visited just to get away for a bit but to also met them.  We talk about random things that are just babble really, every day life and such but we also talk about the important stuff.  I care when something is amiss in their life and try to help in whatever capacity I can even if it is only a friendly word and vice versa.  Friends aren’t limited to who you can go see and have lunch with.

What about you?  What do you think makes a friend?  Do we over simplify/over use the term today to the point where being a friend isn’t as special as it once was?  Tell me what you think, I’ve very curious.
Posted by Eve at 12:18 PM