Wrath of the Titans & Mirror, Mirror

So yesterday a friend saw that I was bored and decided to take me out so we could have a great time.  We went to the movies of course loaded with sugar to keep us hyper for years.  We had a great night all in all full of sword fighting in line at Wal-Mart with slim jims (I won FYI), and making new friends late at night at the waffle house.  But first the night started with two movies and here are my thoughts on them. 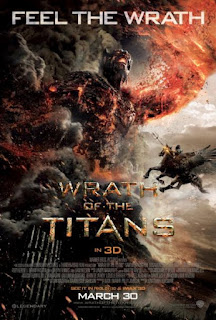 First we have Wrath of the Titans in 3D.  Now as you all probably already know this is a sequel to Clash of the Titans.  If not…well now you do.  So this movie picks up years after the first.  Perseus is living a normal life raising his son.  Dad Zeus comes to him and tells him he is needed to save both Gods and humans.  The walls of Tartarus are falling and if that happens his dad Kronos , evil titan, will be free to basically kill everything.  He doesn’t go at first wanting to be a father to his son instead but then events make it impossible for him to ignore.

This is your typical hero movie.  You have the semi-reluctant hero off on a journey to save the universe.  That being said its still awesome.  I really like Greek mythology so anything to do with Gods and Goddesses is always fun for me.  Such great acting by all the cast, I was invested in them.    I thought all the characters had a lot going on, so much emotion and depth and it really came across.  Even one part to which my partner in crime got upset about (yes that’s all I’m saying).  Great action and the 3d was pretty cool, mostly just when things were falling. 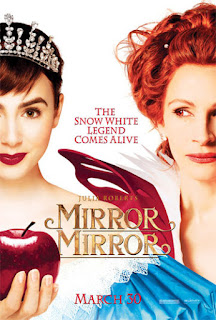 Moving right along we then saw Mirror, Mirror.  Now this movie I went into wanting to see but not 100% sure what to expect.  I knew it was aimed to be more of a cutesy type movie and that’s great, I heart those kinds too.  Basically in summary it’s the Snow White tale told a new way, she isn’t the helpless damsel in distress waiting for the prince to come and save her, she has a more active role in her future.
First I have to say that the evil queen is played by Julia Roberts and WOW.  I am just so accustomed to her being a likable, fun and well…good character to see her play so easily the stuck up, vain, greedy, selfish bitch so well was a shock.  A good one but still a shock.  Maybe it’s that I had just watched Pretty Woman on TV the night before.  Either way she was a great evil queen.  Their take on the magic mirror was really cool I have to say and the effects were pretty cool.

For me the movie had a good balance.  There was such great comedic moments, I giggled quite a lot.  It was predictable but still very cute.  So I say if you’re in the mood for a cutesy chick flick type of movie then go on and enjoy Mirror, Mirror.  If you want something more dark and deadly then…well you’re out of luck perhaps when the next Snow White comes out you’ll be good to go.

Did any of you see either of these this weekend?  Or did you watch The Hunger Games again by chance?  Okay I had to ask I know I’ve seen it twice already.  Either way share your thoughts.  I love to hear what you think.
Posted by Eve at 6:20 PM

Email ThisBlogThis!Share to TwitterShare to FacebookShare to Pinterest
Labels: Mirror Mirror, Wrath of the Titans