Wilde’s Meadow, the conclusion of a series

YAY!  Okay I had to start this out with a burst of excitement.  Honestly, I was beyond excited when I saw Wilde’s Meadow by Krystal Wade on NetGalley.com.  I was all resigned to wait until it comes out November 5, 2012 but then I was checking out the new books added like I do every single day and spilt some of my water down my top I was so excited.  I saw the cover before I saw anything else and didn’t need to know anything else I just clicked and was approved.  I downloaded it on Halloween night, though sadly didn’t get to read it until last night due to work.  So a special thanks to NetGalley.com, Curiosity Quills Press, the amazing author Krystal Wade, and whoever else* for my ARC. 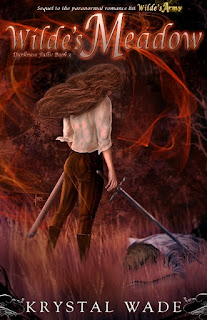 Now down to business.  Like the other 2 books Wilde’s Fire and Wilde’s Army, Wilde’s Meadow has a beautiful and captivating cover.  The first is still my favorite but this one is red and has our heroine sword in hand looking down at a body.  Gasp!  Do you wonder whose body she is looking at like I did?  I agonized over it so much so even as I was reading the book.

Now we have our beloved characters.  Kate has been through so much and is bound to the man she loves and has her army and a clear goal.  She is still terrified that all the visions she’s had of Arland’s death, of those she loves, will come true.  Still she has no choice really but to fight and trust things will be okay.  We get more of Perth as well as he tries to make up for the sins of his past and be the better man Kate believes him to be.  We also get to know others who are so much fun to love and hate.  New creatures from different worlds and the same creepy and deadly deamons.

Visually this book is like the others with it’s vivid details that make the world so amazing.  I could see everything they saw in my mind as I read.  I could see the icky creatures (sorta wish I couldn’t), could see the power of Kate’s light and fire, the connections between everyone.  The pain as people are lost in the war.  With war also comes lots of action and fighting both magical and traditional.

Yes, I should warn everyone here have tissues on hand.  I admit I’m a girlie girl sometimes especially when I get really invested in a story or characters.  I was reading this book and had to stop for the night at one point because I couldn’t stop crying and well it was rather hard to keep reading as my eyes went from watery to burning (my eyes are strange and 75% of the time I cry they burn no idea why).  So I went to bed and tossed and turned wanting nothing more than to know the end, to know if I would keep crying or not.  This is war after all and there are bound to be causalities or it wouldn’t be believable.

I have given this book a much deserved 5 Stars.  Now this is where I would normally put in any complaints with the book and past experience has been that I have to wait for the next one, however, Wilde’s Meadow is the last in the series.  No more waiting.  I guess that would be my only tiny complaint, yes as much as I hate waiting for more, endings are sad and final.  I think this book gives a fitting end to the story and I love this series and will recommend it to anyone and everyone.
So people keep your eyes open for this trilogy.  Wilde’s Fire & Wilde’s Army are already out and the conclusion of the series Wilde’s Meadow comes out in 2 short days.  Check it out.

*There is an amazing interview with the author herself on Sus’s blog click to check it out.  Also note my excitement as she waves when answering my question hehe.