Gameboard of the Gods by RIchelle Mead

My honest review of the ARC Gameboard of the Gods by Richelle Mead thanks to NetGalley and Penguin Group Dutton.  Thank you!  I have been eagerly awaiting this book since I found out about it, being a huge fan of Mead's already as well as the different takes of Gods and Goddesses, it seemed like heaven.  So when I saw this book on NetGalley I hit request so fast it would make your head spin.  I wasn’t sure I'd be approved but I hoped….then when I got the e-mail saying as much…well let's just say my scream of delight and the jumping up and down I did made my cat run and hide in another room.  I logged on and downloaded right away, happy I had it but sad that I was going to work.  Yep silly day job getting in the way of my reading, how annoying.

So I got this book and I read it, work or no.  First let us discuss the cover, simple and clean white with a beautiful bit of blue (I'm a sucker for blues), a beautiful face and some type of black birds in the back (not such a fan of feathered demon creatures, ie. anything with feathers, talons, and/or beak).  It didn't give you a lot which can be good or bad, but in this case the title was intriguing and I didn’t need a bunch of other pretty things to distract from that.  Now here is the summary I read on this book from as I'm too worried if I give my own I'll give way too much away: 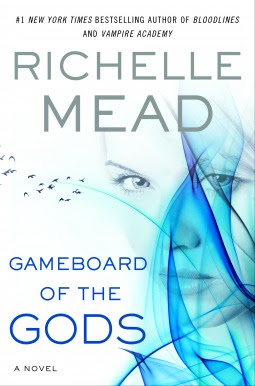 In a futuristic world nearly destroyed by religious extremists, Justin March lives in exile after failing in his job as an investigator of religious groups and supernatural claims.  But Justin is given a second chance when Mae Koskinen comes to bring him back to the Republic of United North America (RUNA).  Raised in an aristocratic caste, Mae is now a member of the military's most elite and terrifying tier, a soldier with enhanced reflexes and skills.

When Justin and Mae are assigned to work together to solve a string of ritualistic murders, they soon realize that their discoveries have exposed them to terrible danger.  As their investigation races forward, unknown enemies and powers greater than they can imagine are gathering in the shadows, ready to reclaim the world in which humans are merely game pieces on their board.

Gameboard of the Gods, the first installment of Richelle Mead's Age of X series, will have all the elements that have made her YA Vampire Academy and Bloodlines series such megasuccesses: sexy, irresistible characters; romantic and mythological intrigue; and relentless action and suspense.

I have to agree with that last part.  You know me and my views on characters by now, I have to like them to like the book.  Well I loved Justin and Mae.  Sure I wanted to strangle them through the book too but that just means I cared.  The book is told primarily through their points of view, with the occasional view from Tessa's.  I liked this idea because it let me see the world through different eyes.  From Mae we have someone who is always amped up and has lived in a caste as well as in the expanse of RUNA serving her country.  With Justin we have a man who was exiled, forced out of the RUNA he loved and left to live in the dredges of Panama (a province) which is the opposite of everything home was, only making him crave to go back.  With the few parts we got from Tessa, we got not only a look at out two leads through the observant eyes of another but at the world of RUNA from an outsiders prospective.

Justin and Mae have some serious things to work out, they both had baggage.  They both have secrets and most importantly, they both are very proud.  They have a lot in common even if they don't want to admit it, or even refuse to see it.  Mead again creates complex characters that seem perfect at first but then after the smiling surface you can see that they are anything but perfect, the way no one is really perfect.  They are also very prideful characters who react like everyone else to things and build up walls and act out, much to my displeasure sometimes but I just kept reading hoping things work come to light.  I was invested in them and wanted to know how things turned out.

If their complicated relationship wasn’t enough for you there was also a marvelous plot unraveling.  Someone or something is killing people in a very ritualistic way.  The only evidence left throws out all scientific explanation.   Yes they are tracking a killer and following leads that put them in more danger the closer they get while uncovering more than they bargained for?

This book has all the best things I love in other Mead books and more.  I love the mythology aspect of Gods being involved, about mystical forces, it all worked out well.  So I look forward to seeing where this story goes next!  What is next for Justin and Mae?  I have so much more to say but in fear of giving it away. Check out Gameboard of the Gods by Richelle Mead it comes out June 4th!