The Mortal Instruments: City of Bones 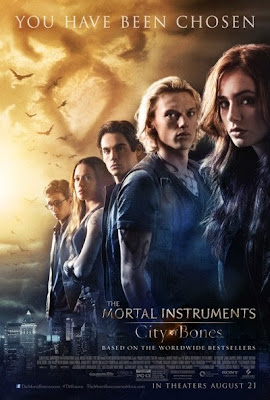 I saw this movie last Friday (opening weekend) with a great group of ladies.  I was so beyond excited for this, hours of time lost to youtube watching clips, trailers, interviews, anything to get my fill while trying to read the books for the first time.   I was on overload.  Then this week orders, work, vehicle complications, finishing book 5 (had finished the first 4 before movie).  In all the madness I never got to put my thoughts down about this movie to share with my readers.

My thoughts about this movie:  Simply put…IT WAS AMAZING AND I LOVED IT!!!

The book was fresh in my mind having just finished 1-4 in the 2 weeks before the movie and was excited to see how they would work it.  How much they would change.  Most important…Jace & Clary.  Some of my group had some reservations about the people cast for the main roles, as they were not what they expected/pictured.  I, on the other hand, say the trailer prior to reading the books so as I was reading I had their faces plugged in.  I will say when we left the theatre they had all come around and felt the actors they were leery of had wont them over for the roll. 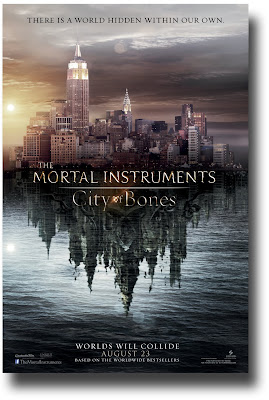 I personally really liked Lilly Collins as Clary, she is able to work the balance of strong and vulnerable that is vital.  Clary is a brave character who rushes forward into things she doesn't understand, sometimes this could be seen as stupid, but she is rushing forward to save or protect those she cares for.  She is also weak in the sense that her whole world has turned upside down and she has moments of breaking down and trying to process it.  Jamie Campbell Bower was what I pictured as Jace because I saw him before reading but I as I read I can't think of a single person who could play this character.  Jace is cocky, witty, confident, and lets face it hot (and he knows it), but when it comes to Clary you see a bit of vulnerability there as well.  Plus he is tall and lean and he has beautiful eyes and a soothing voice.  I would be here all day and this would be a very long post if I went through every character so I will only add one more for pure fun.  Magnus.  He wasn't a huge role in this first one, but he was great with those eyes and glitter, and clothes, or lack there of, were great.  I giggled when he first came in.  His brief time you got to see the fun crazy party host and the deeper compassion.

As with any movie based on a book there are some changes.  As much as us book nerds wish they would just make a 4 hour movie and put it just like the book, Hollywood doesn't seem to be in agreement.  Not everyone would sit through that, sadly.  Thy change things in some parts and speed the time line along (again time is an issue to consider), but a lot of the stuff they changed was more so that they brought things from other books into this movie.  Things we don't learn until book 2 or 3 was in movie 1.  Again I think this was to spare time and give more action.  Trust me there is lots of action and cool fight scenes.  One in particular is The Hotel scene.  It does change with the reason for being there, all of them show up, and for me a sad point, there was no conversation with Raphael.   We get no insight into the Vampires and they are not just Downworlders living with the Accords but they are more pure evil.  I hope we see more on them later.  Another thing that changed was the back story.  There is no mention of the Uprising or the Accords so I am curious how they are going to work it out as the other movies go.  It was close in a sense that they can still make it work.

The romance is a big part of the series but like in the books there is more going on and sometimes even when you want to have the romantic conversation to explain things you can't because well there is the whole save the world from demons thing to contend with.  They live a life of fighting and early death but as Shadowhunters they know to squeeze in their time when they can.  Jace even takes her to celebrate her birthday, something no one else does.  The banter between them is beautiful and the spark is there.  The greenhouse is beautiful and so romantic (also warning I have the Heart by Heart song stuck in my head since seeing this movie).  There is also the connection between Clary and Simon, her best friend for as long as she can remember.  Always there for her and knows her so well, it is clear to everyone but her that he has feelings for her beyond friendship (which fyi I get because there is an event I plan to write and post about in my own life in which I realize how blind we can be about people in our lives).

So I mentioned the greenhouse was beautiful but that doesn't do it any justice.  The whole Institute is amazing, from the door locks (not going to lie I would sit there and lock and unlock my door just to play with it), to the simple yet ornate rooms, to my favorite the library.  The Library was just like I pictures it, multiple levels around the walls but high ceilings and spiral metal stairs (I totally did these, not for practicality but because they look awesome), to the designs on the floor.  The Hotel was also super creepy in the grand turned to ruin kind of way.

That is about it without giving too much away.  I loved this movie and am saddened to see it is only at #3 this week.  I am happy that they have already scheduled to start filming number 2, and I plan to see this one at least one more time before December when it's expected to arrive on DVD.  In the mean time I have my books and the soundtrack to hold me over.  I highly recommend this movie.