Freak of Nature by Julia Crane

This is another ARC thanks to NetGalley and Indie Inked.  Freak of Nature came out back in January but I just found it and got approved so here are my thoughts.   This book one in the IFICS series about Kaitlyn, a girl who checked a box to donate her body to science, though she never expected things to turn out quite the way they did. 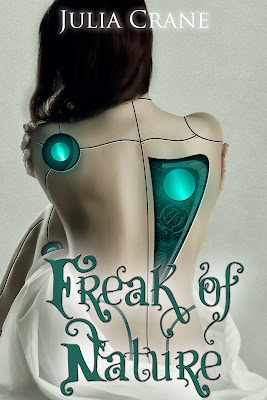 Freak of Nature, follows the story of Kaitlyn, a girl who was once human.  Now she isn’t sure what she is.  She is part machine, but she is still there, secretly still alive in a sense that she has feelings and her own thoughts.  She has human emotions.  She is forced to hide this, sure if the scientists who made her found out they would erase what remained of her life.  Though she finds and unlikely ally in Lucas, one of the main geniuses of the project, who still has guilt over knowing what a vibrant and beautiful woman she had been and taking that away.  Though he never suspected in a million years that the spark of life he saw in her through research was still hidden within.  Together they work to figure out the best course of action.

The story was good and easy to follow.  I found myself liking Kaitlyn.  She wasn’t entirely human anymore, she had no memories of anything accept what she was programmed with and things she had learned during her training.  She took everything very literal.  She had a wealth of knowledge of everything, but at the same time nothing they gave her seemed to explain the feelings she was having, especially for Lucas. Let’s face it they don’t make an app that can explain how we feel half the time, especially not if we start to fall in love.  It’s an exciting and unnerving thing for the regular girl, so it was even more so for Kaitlyn who can only assume something is wrong with her.

She isn’t the only one though.  You also get to see things from Lucas’ point of view which I enjoyed.  I think it could have been lacking in the chemistry department or even a bit weird if it hadn’t been.  His back story was brief but it was quick and stayed in the moment.  I look forward to learning more about him and his rich employer at IFICS as the series continues.  He starts out thinking he will be working on a science project, but one has never affected him like this.  Then again Kaitlyn is unique.  A strong and capable weapon, but also a confused girl who is just trying to figure out her place in the world.
As I was reading, the book did make me think of an older movie, one I couldn’t remember the name of and after a couple hours of not being able and it driving me crazy I looked it up.  The movie is you are wondering was, Bicentennial Man with Robin Williams as the robot with a soul and feelings.  Obviously not the same, but I realized how long it had been since I saw it and I have yet to find it at my local stores or on Netflix to re-watch it.

I give this book 4 stars, I really liked it.  I became invested in the characters and I wanted to know what was going to happen next.  Could they find a way to make this work, for Kaitlyn to be who she is and not fear being erased completely.  Again this book came out back in January so check it out!  Already read it, want to read it, thoughts on human/robot with feelings, souls, etc, share below.
Posted by Eve at 1:09 PM