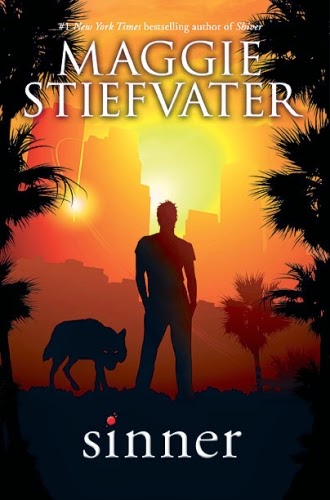 We’ve all been there.  The end of a series we love and the author saying that is the end.  No more.  We’re happy to have the books the books we got but still, as with anything good, we would always like more.  That was The Wolves of Mercy Falls trilogy for me.  I may be more emotionally attached to these books because I fell in love with Sam and Grace’s story in Shiver when I first started reading for pleasure again.  Over the years as the other two books, Linger and Forever, came out I grew to enjoy not only them but I grew rather attached to Cole and Isabel.  I always felt their story left so much open at the end and I wanted more but was left to use my own imagination.  Then I heard the news that there was going to be a companion novel following Cole St. Clair.  I did my happy squeal of delight that scared my cat, apparently the pitch is rather high, and marked it in my calendar on my phone to start my count down.
I re-read Forever to get ready for it.  It came out July 1st but as I pre-ordered my physical copy so I could have the special additional dust jacket Maggie was kind enough and artistically inclined to draw as well as get my copy signed, I am very proud of it, I had to wait a few extra days to get it.  I received it July 3rd and had to restrain myself not to start it that night.  See I had to work at 7:45am the next morning and I knew if I started it I wouldn’t stop to sleep.  Plus I was warned the day would be dead so I should be prepared to keep myself entertained.  That is easy enough for me.  Sinner kept me entertained.  I read through work, minus taking time to take a small test I was required to take for my job that took about an hour and a half I read the whole time.  I was so excited to have Cole and Isabel back in my life.
I reviewed the trilogy as a whole back when I first started my blog here.  I am not a spoiler-y type of person so I’ll keep this as spoiler free as possible.  If you haven’t read the original trilogy you will probably be a bit confused and there will be spoilers for those, so be warned. Now this story does have the supernatural element of wolves but it is more of a contemporary story in a whole.  Sinner takes place some months after Forever where Isabel was being moved to LA and she told Cole, when he called to say he wasn’t dead, not to lose her number.  Cole is in LA to record a new album and to do that he signed on to do a reality TV show known for getting people to drop to their lowest levels.  And he is there to see Isabel.

We see this story from both Cole and Isabels’ POV.  We were in their heads in the other books sure, but this is only about them.  Sam and Grace do make somewhat of an appearance which was a nice homage to where this all started but it is completely about Cole and Isabel.  They are both screwed up.  They each have their own inner demons to deal with and they can bring out the worst and the best in each other when together.  Isabel the ice queen who doesn’t let anything get through her protective shell and who certainly doesn’t believe in love or happily ever after.  And this wars with the way a certain guy makes her feel despite her best efforts not to.  Cole on the other hand is struggling with who he is and the mistakes of his past.  Can he change the destructive parts of him and keep who he is or is he doomed to spiral out?

There are no cute and fluffy moments with these two, not traditionally at least, but there are scenes that for them are cute and fluffy.  They don’t have the relationship that Sam and Grace had that if they had each other and love that is all that mattered and they could make it through the hard times.  They are different people and that isn’t who they are.  Isabel doesn’t want to let Cole in again and risk getting hurt all over.  She has enough going on in her life and is unsure if she even believes in the concept of happiness and trust.  Cole doesn’t make it easy because he is so rash and frenetic, which is part of what makes him so much fun to read, and that overshadows his deeper self sometimes.

Overall I have to say I love this book just as much as the others if not more.  I readily give this book 5 Pairs of Leggings.  I can’t praise this book enough and I was not disappointed at all.  So share your thoughts below.  What do you think of the companion novel or the original trilogy itself?  Tell me what you think, I really want to know what everyone who takes the time to read my reviews thinks.  I want interaction so we can discuss!
Posted by Eve at 1:41 PM