Delirium: The book, the series, the pilot

NaNoWriMo is still going strong and I was caught up with my word count for all of 5 hours.  But I needed a break from my story and have many reviews I need to get out of my head and down on paper to share.  More room for my book to take over my mind and I’m pulling a 12 hr shift at work on 3 hrs of sleep.  Haven’t had to do this in a few years so I’m a bit rusty.  Getting my thoughts on some great books I read down for you and keeping me awake at work, a win/win. 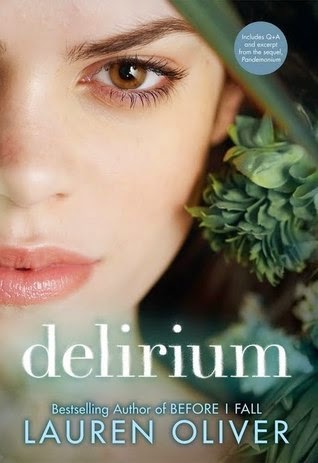 As I have been reading series through beginning to end, trying to catch up I’ve decided to split my reviews into two sections.  The first part I’ll be discussing the first book in the series in detail spoiler free, then I’ll add a warning before diving into the rest of the series so those not caught up can still enjoy part of the review and have something to come back to.  The first book and series is Delirium by Lauren Oliver.  The first book is aptly named Delirium and the two other books in the series are Pandemonium and Requiem.  There are also 3 short novella type stories Annabel, Hana, and Raven.

So Delirium is a few years old, yes I’m behind the crowd but I’m catching up.  I have had this series on my list for some time and I read it first mostly in part when I found out that they had planned a TV series but it didn’t get picked up.  However, for a short time the pilot episode was available on Hulu and I wanted to read the books, at least the first one before I watched.  So with a deadline hanging over my head I started reading.  For those of you unfamiliar with the plot of the story here is a brief summary:

Before scientists found the cure, people thought love was a good thing,

They didn’t understand that once love, the deliria, blooms in your blood, there is no escaping its hold.  Things are different now.  Scientists are able to eradicate love, and the government demands that all citizens receive the cure upon turning eighteen.  Lena Holoway has always looked forward to the day when she’ll be cured.  A life without love is a life without pain: safe, measured, predictable, and happy.

But with ninety-five days until her treatment, Lena does the unthinkable:  She falls in love.

It’s an interesting concept.  Love is a disease and thus is cured.  Life should be at peace.  It brings up a lot of questions and possibilities.  For me I debated if you cure love could one not cure greed or drive for power?  Would the cure for those not work just as well for peace?  Also is peace worth the overall cost?  That seems to be the debate in most stories, does one thing justify the ultimate outcome.  For me the biggest interested while reading was my internal struggle was the idea of happiness without love.  Can you survive without love?  We are creatures of heart.  We love love.  We strive towards the feeling despite the cost many times, through the risk of pain it could cause.  Easy to see why they think curing it would calm the world down, but would that not take away what makes us essentially human.

See an interested book idea!  All this debate and I was only in the first few chapters trying to decide my view on this new world.

Our main character, Lena, is firm in her belief in the cure.  She has a past that demands perfection and dedication to the rules for a good match.  Yes without love all marriages are arranged.  Lena is at her exam being graded on how good she is and how good of a match she will make when she sees a handsome guy.  Yes guys are separated from girls, minus family, until they are cured of course we wouldn’t want anyone falling in love before they are cured.  She sees him again, sees his mark indicating he is cured and feels safe.  He is okay to be around if he is safe.
She starts unexpectedly down the rabbit hole.  Alex is more than he seems and despite her logical reasoning she finds herself experiencing symptoms of the deliria.  Once you feel what is forbidden how do you go back from that?  With the lines between right and wrong blurred who can you trust and who will betray you?

Delirium was a pretty quick read for me.  I couldn’t put it down wanting to know how it would end.  Would Alex and Lena manage to be together or would they be found out.  How would they manage with her cure procedure date looming closer and closer?  Plus in my head I was thinking of a million ways to take the system down.  I was trying to decide if I bought the concept.  In part I do, but the larger and more emotional part of my head and heart don’t.  Not because of the writing by any means but because I couldn’t imagine there not being a love of family and friends.  Curing romantically love, sure, but the love one feels for their family as they grow up together and friends as you bond, not so much.

Now before I go into the rest of the books in the series I want to discuss the pilot episode that was on Hulu.  I watched it.  I enjoyed it but if that was the pilot I see why it didn’t get picked up.  It was basically the entire first book.  Where would it have went?  There are two more books sure but with a book an episode a small mini-series event maybe.  That being said I wish they would go back and maybe make some adjustments, add a few things that were trimmed, and make it into a movie.  75% of the story is already there.

*****Now I’m moving into spoiler territory so if you haven’t finished the series please click away now and come back when you do.***** 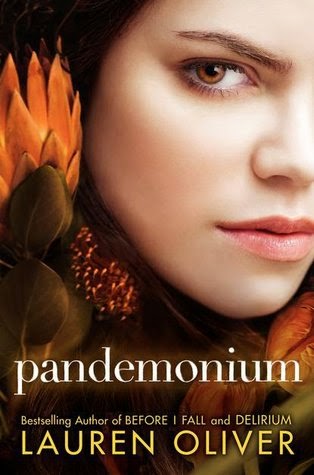 Conflicted.  That is me for the rest of the series.  I enjoyed seeing more from the different POV’s in the other books, particularly Hana.  I was mad and it only confirmed my suspicion of the betrayal when I saw her side and seeing her indecision and pain I could see her side of things in a way.  I was able to forgive her.  But the thing I missed most was Alex.  I was 100% sure that he would come back but as time wore on I got concerned.  Then I saw the semi-predictable plot line forming in my head.  Forced to earn Julian’s trust Lena ends up growing closer to him, finding him not the monster she thought. 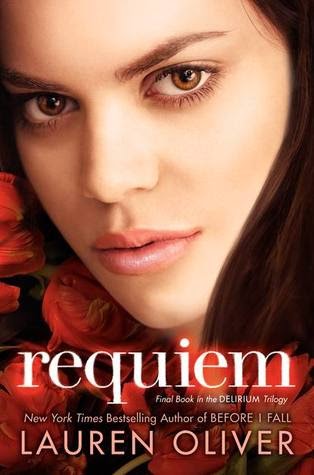 As I’ve stated before I’m okay with some love triangles.  Ones where one part of the original love is thought dead, one must move on, our characters are young after all.  So if finding a way to move on and dead other half isn’t dead well I can see there being conflict there.  A mess of emotions.  Alex has been through hell and doesn’t get that at first and reacts badly and Lena is confused and indecisive.  I have to say book two and three were a tad bit over ripe with the love drama part.  It wasn’t overdone to the point I felt annoyed, and in a way I could even see how focusing on the mini drama of your romance could be a coping mechanism for dealing with the war being fought around you.

For me it worked where book 1 was more from the cured side and book 2 is from both the rebels who believe in the right to have love but also from the perspective of someone who is cured; which we didn’t see in the other book.  We see what changes it makes in the person. 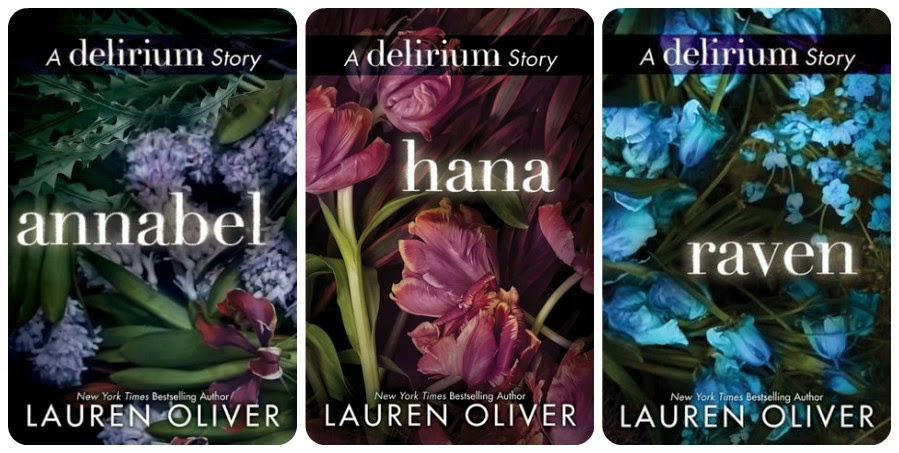 Now for the biggest part of the confliction and a huge *SPOILER* the ending.  At first I was pissed off.  It was left hanging and I felt unresolved.  I felt like I wasted all that time reading to not get an ending.  Then as my initial shock wore off I realized how ingenious it was.  There was so much going on and she gave you the possibility of it going either way.  You could as the reader essentially see it as a happy ending for whichever version you liked.  Did you prefer Lena with Julian or with Alex?  Did you want people to escape or to combine and live as one and work through?  It was all there and all possible.  I will say that the horrible evil part where a certain person is seen possibly being dead was NOT okay and as it was never confirmed I’m going with my happy ending.  Overall I give the series 4 Stars. 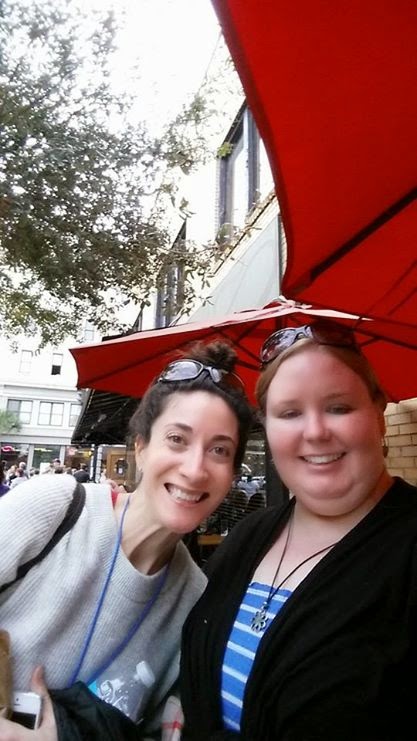 Also as a side note Lauren Oliver is super friendly and nice.  I was good and did not rant about my feelings on that one thing in line, because I didn’t want to hold it up, but I did mention I was happy she left it open so I could make my own happy ending.  She smiled at that, which confirms for me that was the point.
Posted by Eve at 3:32 PM