The Darkest Part of the Forest, Indeed

I have a review for you today, but first a special announcement.  I want to thank everyone who took part in my last giveaway for the release of the last book in the Penryn & the End of Days series by Susan Ee.  I'm really enjoying the giveaway fun and plan to do more in the future!  That being said a special congrats to the winner, pulled randomly via rafflecopter!  Emily R who enjoyed Pooky Bear!  Congrats!  You will have your lovelies soon.  Thanks again everyone for participating.  Now onto the book review. 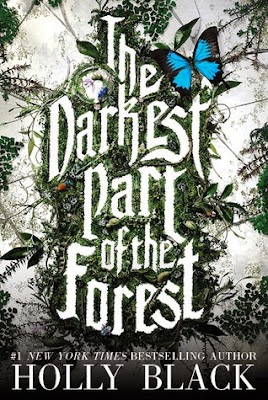 I have several Holly Black books.  I have heard amazing things about them and the plots all seemed interesting to me, hence me buying them.  Still I hadn’t picked one up to read for various reasons and time constraints.  Then a friend and I decided to start doing a read-along every other Sunday (while I’m at work) and discuss as we read after doing it by coincidence one Sunday.  We compiled a list of some books we both own but have yet to read and we picked The Darkest Part of the Forest, my first Holly Black book to read and I want to share my thoughts on it with you my happy readers.

I was intrigued by the book based on the cover and the plot line.  Most intriguing thing about it was that it was a stand-alone fantasy story and wasn't 500+ pages long.  This I hear is harder to master.  Color me excited.  The basic plot, if you are unaware, centers around a small town where humans and fae exist side by side.  The fae attract tourists which is good for the towns business but they can also be dangerous.  The center of attraction is a glass coffin in the woods.  In it rests a boy with horns and pointed ears.  We follow Hazel, who once thought she and her brother Ben were supposed to be a knight and a bard to battle all evil.  A child's fairytale it seems.  They also, along with many, fancy themselves in love with the boy in the coffin.  The fantasy of it all, having slept for generations never waking.  Until one day he does.    The world is turned upside down for our town as Hazel tries to put the pieces together that only she can know.

I liked the way the fantasy of the fae world was blended into the current/modern world like I know it.  The magic balanced the line between the mystical and understandable.  Enough was explained to follow along and make inferences but it still held onto enough to make it…well magical.  There is so much happening in this book so the reader is never bored.  Not for a minute.  Where did the sleeping horned boy go?  How did he get out?  What does it all mean?

Those are just some of the many questions you get to discover in this mystery.  Plus we have our would be hero ready for a battle, she was after all supposed to be a knight.  Holly Black also found a way to weave in just the right amount of romance too.  I didn’t even know I was growing attached to certain characters as a couple until I couldn't imagine it otherwise.

One thing I found very intriguing is the small town prejudices.  Maybe it's just because I lived in a small town for a vast majority of my life but it felt so real.  Especially in the south where you are judged on who your family is and where you go to church.  Watching how someone is treated as an outcast for no reason other than something they are 100% unable to change is insane.  Seeing the way this character deals with the adversity and not let others opinion of him turn him into a monster.  That resonated for me.  The characters are all so complex each having their own growths and quests to go on be it internally or externally.  Hazel was very loving and compassionate, she wanted to be a good sister, be a knight and fight off fae, and figure out a way to make it happen.  Ben, the way he progresses in the story, reading his story and what has happened made me tear up.  Same goes for Jack.

The Darkest Part of the Forest has so many twists and turns I don't want to risk spoiling it by saying to much so I'll just say that I gave it 5 stars.  It was an interesting and unique story that weaved everything within it so seamlessly and beautifully I felt I could go there and visit and see the glass coffin and the fae.  Highly recommend and now I can't wait to continue with other works by this author that I own.

That's it for today.  I'm hoping to get back on some type of schedule again, I just went to night shift so I'm keeping vampire hours again which should be good for both reading and writing time.  You know the drill from here.  Please leave a comment below letting me know what you thought about the book?  The review?  Things you'd like to see in the future?  Thanks for tuning in and I will have another review up for you soon.