Crown of Smoke. A strong debut novel that leaves you wanting more

Today I am happy to discuss with you the release of a new book I had the pleasure of reading by a debut author; and that is Crownof Smoke by Snowa Fox. This is the first book in The Angel Marked Series.  I had the pleasure of receiving an ARC to provide my ever honest review and let me say how much I enjoyed it.  Crown of Smoke came out June 2nd so you can check it out now.

Let’s start with the cover.  It’s simple and pops.  Sometimes sticking to simple colors that contrast just makes a statement and the hunk on the cover didn’t hurt either.  The story is about angels, demons, redemption, dreams, political intrigue, romance, and so much more.  It’s a multi-prospective POV focusing on our main characters, Dream Guardian Vaughn who is also the crown prince of the realm Lucidity who has a lot on his strong shoulders, and 22 year old archaeology student Lila who is unknown to her Angel Marked.  There are a couple other POV’s as well but they don’t pop up as frequently, including the mysterious Mistress and some of her minions/helpers.  When Lila discovers an artifact on a summer dig site her life takes a bit of a downward spiral as things of nightmare start to hunt her down and attack her in the flesh.  Vaughn protects her, a decision that has serious consequences for both Lila and her guardian.

This story has a lot happening in it and it jumps right into the meat of the story.  We get to learn about this new world, Lucidity, where our Dream Guardian lives.  Crown of Smoke manages to teach you about the new realm and its people, society, structure, etc. in a way that builds slowly as you get deeper involved.  It manages to explain what the reader needs to know at the time and explains more when it is needed so as to space it out and not info dump it on you.  I like this technique the best.  Plus, as Lila is completely ignorant of Lucidity she has to be taught about it as well and we can learn about it with her.  She asked some of the questions I asked reading along with her but she spaced them out only able to process so much at a time, which I believe in 110%.  Slow and steady wins the race.  I liked the idea that Lucidity is similar to Earth as we know it but it doesn’t have technology, minus a few sparing items that are run on clean energy.  I wanted to visit.  Minus the attacking evil cat things…those I can do without thank you.  My cat spazing out on me on occasion is enough. 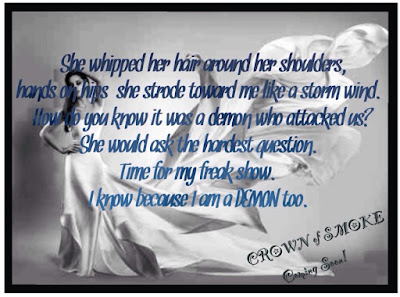 Vaughn, aside from being Dream Guardian to Lila and Crown Prince of Lucidity, is also a handsome, strong male lead who has a soft side to him.  He’s a real dream boat, pun intended!  He isn’t just a pretty face though because Vaughn has some serious things weighing on his mind with many depending on him and not wanting to let anyone down.  Talk about stressful.  But we grow to know him and the conflicts he faces and the reader is able to see why he so great, sexiness aside.  Same goes for Lila, she has been through some traumatizing stuff and it doesn’t let up.  The combination of strength and weakness is balanced out well in her character.  She breaks down, sure who wouldn’t given the circumstances?  But she keeps picking herself up and wanting to learn more to grow stronger both in knowledge and body so she won’t be a burden or damsel.  I respect that.  She questions her sanity more than once and given someone telling you a whole other world of angels and demons exists I say that is spot on.  That is just the main characters and we have a plethora of side characters who only add to the amazingness of the story.  Some of them plain made me chuckle while others made me want to stab them in the eyeball and were the reason I had to set my phone (what I read it on) down so I didn’t throw it.  Only intriguing characters and story get you that worked up.

Both our leads have such complexity alone when you add them together they just sizzle.  There is a complexity to them as they get to know one another in a stressed time dealing with a million other things, including staying alive.  While things move fast it never to me felt insta-lovey, there was always something more.  The bond and instant connection and feeling of safety allowed more to blossom naturally.  There was still a bit of leeriness of the unknown there and questioning of the feelings so quickly which to me helps ground it. 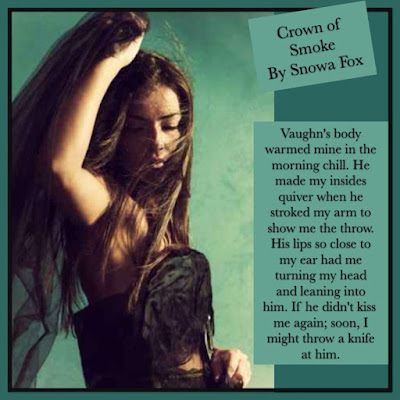 Crown of Smoke isn’t all about the fantasy romance either.  It has lots working for it including action, political intrigue, and a suspenseful mystery following the whole thing.  It also blends in a love of history and culture through Lila and learning about her Nona’s people.  I won’t ruin the surprise for you but it’s full of demon fighting, dagger wielding goodness.  Overall, I felt this was a strong start to a series and most important it left me wanting more.  I look forward to picking up the next book when it’s available and reading on, especially with where things are left.

Crown of Smoke came out this past Tuesday on June 2nd and is available on Amazon.  I loved it so much I was quick to snatch up a copy for my kindle and plan to get a physical copy this month as well.  Stay tuned for more reviews and fun.  I’m excited for UtopYA, it’s fast approaching and I look forward to sharing the fun with everyone!