Welcome to Week 4 of Ready. Set. Write.  Simple is the name of the game. 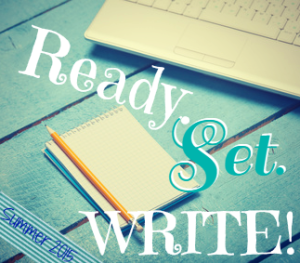 How I did on last weeks goals: Well I missed last week given I was sleeping most of the day after returning from UtopYA super late/early.  But the last goals I had went pretty good.  I had a blast at UtopYA and did learn a ton, made tons of new contacts and friends, and had such an amazing time I can't even put into words.  I know some of you asked for details, to keep this short I made a brief post about it and filled it with tons of pictures and a swag giveaway open until Tuesday which you can see here!  I also haven't posted the lip sync videos anywhere but Facebook due to my lack of knowledge on uploading them and Blogger saying they are too large.

I did not post a chapter in my Fanfic as I was so busy having fun there and honestly being home has just zapped me.  Apparently being out there and open when you're normally more of an introvert takes a lot out of you.  I did get about halfway through the chapter I want to post and I have the rest plotted out just have to get it rolling again.

I didn't work on my WIP at all thought.  But at UtopYA several people gave me an idea for another story and I have been writing down ideas and notes for that so I'll count it as a half win.

I also technically did my posts/reviews but it was also an extra week in there so I feel there should have been more but the signal in Nashville was kinda crappy for everyone so I honestly didn't even take my computer out of its case.  I was in my room to drop off books/swag, refuel, shower/change, and SLEEP.

My goals for this week:
·         Work on a new short story that came to me Sunday and see if it could develop into more than a short story as I'm kind of unsure just yet but I don't want to lose it.

A favorite line from my story OR one word/phrase that sums up what I wrote/revised:  What I have currently is just notes for a new story but the idea/project others mentioned was something I thought about previously.  A collection of short stories about the crazy and insane time as a 911 dispatcher for a small southern county.  Thoughts?

The biggest challenge I face this week:  Coming back from vacation and trying to readjust my schedule.  Also remembering all my work passwords (seriously I have like 8 different ones that have to be changed at different time frames which make it hard enough to remember on a good day let alone after a week of no use).

Something I love about my WIP:  That I have all these new ideas running through my head and so much determination to FINISH them.