Happy Friday everyone!  Last weekend the latest John Green book to movie adaptation came out, Paper Towns.  I had not read the book but wanted to do so before seeing the movie.  I finished the book the day before I saw the movie so to say it was fresh in my mind when I watched the movie version is an understatement.  That being said I decided to do a joint review.  I'll talk about my thoughts and feels on the book first then move onto the movie. 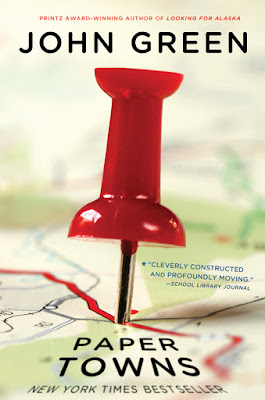 I should say that Paper Towns is my second John Green book, I read The Fault in Our Stars before that movie as well.  I didn't snot cry like I did in that one so I call that a win.  This was practically a happy book in comparison.  The book is about Quentin 'Q' who lives next door to the adventurous Margo Roth Spiegelman and had a crush on her since childhood from afar.  Until one night when she comes to his window and him to accompany her on an ingenious plot of revenge and adventure.  He joins in and for the first time he breaks his pattern and some rules and comes alive and feels promise for the next day.  That is until he arrives at school the next day and Margo isn't there.  Or the next day or the one after that.  She has disappeared again the enigma she has always been.  This time her clues seem left for him and he believes he is meant to find her.

I really liked Q.  He was pretty great.  His relationship with his best friends Ben and Radar was just spot on and much fun.  The way they bicker back and forth and randomly just slack off on what whatever tangent they were on always made me laugh.  The friendship there was real and made me want to be friends with them.  Whereas with Margo I didn't care for her much.  She was interesting in the beginning but after she takes off I cared for her about as much as I did for Sloan in Since You've Been Gone.  It started out slowly though and I grew to like her less as the story went on but at the same time I was falling more in love with Q and the others so it was a trade –off I was okay with.  I just felt she was a bit self centered and juvenile.  I liked some of her ideas and that she helped to break Q out of his shell and made him see life differently for a change but that's about it.

Anywho my dislike of Margo aside the story was rather good and compelling.  I spent most of my life in North Florida going to Orlando on a regular basis so to read about the place as just a normal town and to have the characters visit places I've been to or could have been to while I was there as a wee lass is fun.  The clues and the mystery was interesting and it took some thought to leave them and to discover them.  And I mentioned it previously the way Q grows into himself really made the story.  It wasn't just a mystery to solve but to see him step outside himself and deal with everything.

That's all I can really say about the book without giving much away.  Plus I really want to discuss the movie and how they differ. 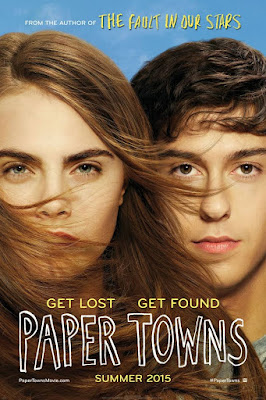 The movie is for me rated higher than the book.  Strange I know.  The book still had many things that were better story wise but as a whole I feel I enjoyed the movie a bit better because I didn't dislike Margo as much and I felt like I got better answers.  There will be spoilers for the movie and book comparison below so just be warned.

Paper Towns the book had more detail as any book does over their movie counter-part.  There was more clues more adventures and such but they could drag a tad bit so cutting them and streamlining was a smart call.  I also found out after they cut one due to the controversy surrounding Sea World and not wanting to take part in it.  Okay.  But one of the biggest downsides for me was they cut the complexity of the search.  Q wonders with all her messages and signs that she might be waiting for him to save her or find her body.  He is really unsure if she is leading him to her or to her body.  That was a deep part of the search and the movie made it seem more like a boy with a crush going after the girl he's loved from afar to 'get the girl' as it were.  One other thing that does bother me in any movie, there was a scene clearly cut from the movie that they filmed because it was in the trailer which makes no sense but I hope to see it on the DVD.

Why I enjoyed the movie better?  I mentioned I liked Margo better, she had more depth.  While I still found her somewhat self-centered her logic while flawed did seem to make sense in a way.  It didn't seem as cruel.  I also liked changing the timeline of the story.  The gang racing to NY and trying to get back in time for prom was much more believable than all of them ditching graduation.  They kept the best parts of the book, the fun and excitement but they also enhanced things like Ben's romance.  In the book it just happened almost by accident but in the movie it seemed more natural and progressed.  I also LOVED the idea of including Angela in the road trip.  It kind of balanced things out but also and more importantly it let us get to see more of her character and by extension more of who Radar is.  Also can I point out my theatre was having some technically issues and I lost picture for a minute or two around the gas station scene and just after.   I did manage to see the little cameo!  But I did miss the visual reaction to the T-shirt but I will be re-watching it again, hopefully without issues.

Overall I think fans of the book will enjoy the movie and people who have yet to read the book will still be able to go in and enjoy the movie.  The best of both worlds.  So there are my thoughts and feels.  Leave a comment below and share your thoughts with me.  Have you read the book and seen the movie?  What did you like/dislike about them?  Also I still have a giveaway open until 8/2 at 12:00am EST for a signed copy of A Court of Thorns and Roses by Sarah J Maas here so check it out.  Until next time!
Posted by Eve at 6:25 AM