Hello happy readers!  I hope you all had a wonderful weekend!  I know I did.  I finished two books at work, yes it was that slow and dead.  The one I’ll be discussing today is Fall of Thrones andThorns, what a tongue twister, the final book in the Threats of Sky and Sea series by Jennifer Ellision.  I previous reviewed the first two books Threats of Sky and Sea and Riot of Storm and Smoke so check those out.  This one will have spoilers for the first two books.  Duh. 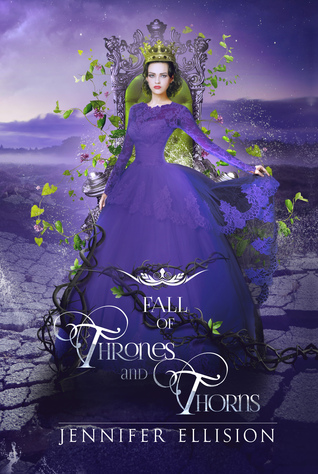 We left off the previous book right as Bree had come clean in a very visual way, her blood spilling into the sea showing her to be the true Queen.  A secret she had kept since end of book one having previously decided to keep it to herself and let Aleta be the queen as she had always believed she was.  Very shocking reveal but having just been called liars there to trick them she didn’t have much choice.  Truth out things are not easy.  This had been built up in her mind and heart as a safe haven, a place out of reach of the King Langdon.  Things though are not that simple or that safe as her and her friends grapple with changing of identities and the understanding that Langdon will never back down until he finds a way to conquer Nereidium.  Nowhere is safe so they decide to act first instead of waiting for further attacks.  They must go back, back to the place they just fled.  To bring this to an end once and for all.

I was excited to be able to marathon these two audiobooks back to back and finish out the series.  There is just something great about it.  No lag time in remembering who people were or what was happening I was in it and anxious to see how it would end.

We are at war.  We have lost many characters over the series and there is still more fighting to do.  King Langdon is evil and there is no question he must go.  Bree is caught up in her newfound acceptance of her birthright and learning about her people, as she hasn't spent her life planning for this like Aleta.  Watching as she interacted with her Aunt was beautiful, both very eager to get to know the other but also a touch apprehensive.  It has been so long and getting to know long lost family is hard.  We also took some time for Aleta, who really grew on me in the second book, to deal with this mess.  She has spent her whole life focusing on the Nereidium people and how she would fight the king to get back to them and her people only to find out she's just a commoner.  That is a harsh blow.  Oh and your friend has been holding this truth back for a while.  I'm glad the book allowed Aleta to deal with that, to see what it was doing to her and how she could recover her new identity.

In my last review I mentioned the little pieces of romance in the story.  Little bits that make you want more but it's not the primary focus which was so refreshing and different for me to read.  I love me some romance heavy stories don't get me wrong but this was done so beautifully.  Bree and Caden have a romance and a connection but they both clearly admit that while they care for one another and would like to see what could happen if they ever manage to find peace, they are in a WAR and worrying about romance isn't really even on the top fifty things they need to focus on.  That was great.  The other romantic side we see again just has its moments that make you want more but again both parties have more important things to worry about.  Though thinking about the "what if" moments for a few moments here and there is nice and real.

This is a conclusion and a final battle of the war.  We see just what King Langdon has been up to and the danger that he brings.  He has truly lost his mind.  Our group is both pulled apart and pushed together in this crazy story each finding more solid footing on who they are and what they want for themselves in this life.  The battle is on and only one can win while many will lose.

Fall of Thrones and Thorns was a great ending.  It really managed to encompass the entire series and what the story had been building too and wrapping everything up (be it good or bad).  Still it managed to not just be a conclusion but a whole story in itself as these characters we watched from nothing come fully into themselves and battle the odds.  I loved getting to see the dynamic of the group, all of varying personalities and motivations coming together.  This was a great conclusion to the series and I don't want to say much more or I'd give more away.  I look forward to future books/series from this author for sure.