Hello happy readers!  I hope you all had a great weekend.  I have been battling a sinus infection, fun times, so I did a whole lot of sleeping when not arguing with my internet provider.  Anywho on a happier note I'd like to share my thoughts and feelings on a newer stand-alone I finished, Ghost Machine:  A Gothic Steampunk Novel by Kristen Brand.  I received a copy from the author in exchange for an honest review. 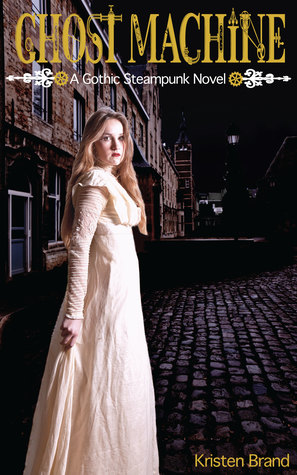 I don't think I've read too much steampunk in the past but the idea really does fascinate me.  As does the idea of asylums there is just something about them that can mess with your head.  So when I saw that the book would follow Ella as she was locked away in a remote asylum and put through torturous treatments to cure her hallucinations I was already hooked.  She wants to get better from the ghosts she began seeing but as the treatment becomes unbearable and seems to even been making her visions worse she begins to see the good doctor doesn't plan to cure her but to dissect her ability.  Refusing to accept her fate and be slowly killed she is going to make a break for it.  When she makes her daring escape she nearly dies but finds herself in the home of Baron Viktor Szarka, a cruel man and possible murderer if her fellow patient at the asylum is to be believed.  Unable to trust him, or anyone, Ella must try to uncover the truth behind her visions and the secrets of the Baron and the asylum or become a ghost herself.

To feel like there is something off with you and wanting to go somewhere to try and get better is a huge thing.  The idea of anyone taking advantage of someone in such a vulnerable position is truly monstrous.  Seeing ghosts is scary enough but to be somewhere that is supposed to help you overcome this but instead has its own purposes and agendas really makes you relate to Ella.  I found myself really rooting for her from the start.  She loved her family and wanted to do what was best for them.  She is a very strong character throughout the book because even as she is scared or in pain she continues to push through knowing she must.  She also doesn't do things solely for herself but in the service of others which is always commendable.  Ella is also of a scientific upbringing and knows that you must have facts to make sound decisions and while she may have questions or concerns about some she is constantly changing her stance on things as new information becomes available not getting stuck in one way of thinking.

The rest of the cast, from parents, to the Viktor the Baron and his small brother Andras, the staff at the asylum including the vile Dr and his head nurse, to the various people we meet along the way in this novel were all so much fun.  Be it good and truly evil like the best old time villains or the precocious little Andras, or the confounding and mysterious baron.  I can't go into them too much without ruining the story as it unfolds because while they all play their parts to the story they all have their own motivations.

The plot of the story is really an escape story.  Ella is set to escape and is trying to get out of reach of the powerful Dr and his experiments in the asylum.  The ups and downs of the escape and running, the hits and misses with nothing being easy but adjusting as it goes was so much fun to read I didn't want to put it down.  As more started to come out about her, gift, and she began to accept each new piece of information trying to understand it was so nice.  The pacing was strong and kept things moving and it always kept up with itself, injuries continued to play a part not forgotten which is nice consistency.  There is plenty of action and suspense in the daring escapes and fights, the changing landscapes and travel you really see so much of this world full of creations that really capture the imagination.  Overall I really enjoyed this book and it was a super quick read.  I think anyone can dive into it and enjoy it!