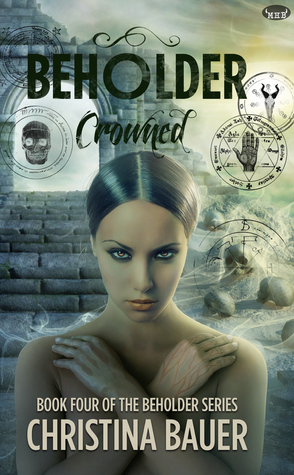 Hello happy readers!  Life around the holidays has been kind of crazy, go figure.  That said I was able to curl up and cuddle with my cat and finish a new release that has been on my anticipated release list for some time.  It is the final book in the Beholder series by Christina Bauer, Crowned.  I previously reviewed all of the books: Cursed, Concealed, and  Cherished

So when we left off Elea and Rowan are together with a goal to save the world by preventing Viktor’s invasion.  That means finding the Sword of Theodora, the only weapon that will kill Viktor without killing herself.  Though on the eve of battle Elea begins to realize that her enemies may be far more powerful than him, but the Sire and the Lady as well.  With the battle coming at her on all sides she must fight and with her mate and others she loves she is ready to give it her all.

This is what it has all been building towards.  We know the gateways need power and everyone seems to think that means Elea.  Petra sure is determined that she will be the one to die for the recharging and is willing to do anything to convince her of this.  So what do you do when you have many questions and a limited amount of time to figure things out?  You use what you got.  In this case you ask the trickster gods for help during a celebration and hope they grant your boon.  Still even if they do, they are tricksters and they don’t do anything for free.

I was nervous going in worried how things would end for my Elea and Rowan because something always seems to come between them and their happy ending.  I also on principle never trust deals made as there are always loopholes.  So dealing with tricksters I knew something would go wrong and I was right.  I was even so proud of her for her attention to detail but sigh the tricksters are good at tricks.  Their tricks though about broke my heart many times over.  As I read I just couldn’t believe it and kept reading until I got to the next page.

Things happen real fast and you never lose the momentum.  It is a constant rollercoaster of action and suspense as you unravel the secrets and mysteries surrounding this comment and the gates.  Nothing is easy and hard decisions are plentiful.  Everyone has really come a long way in the series and I am sad to see it end.  We got to meet new characters, learn about a whole new people and of course work to save the world.  Crowned worked to resolve many open storylines as well as giving up more to feast on.  I was very happy with the end of this book and this series, if only that I was sad to see the end.  I also wish there was a bit more to the end as I am sure some of the after effects would have been interesting to watch.  That said I have recently seen there is going to be an epilogue novella so yay!  That said even with the upcoming epilogue these four books are very satisfying and I would highly recommend them for a marathon they are set up perfectly for that!