Hello happy readers!  So a little bit of an apology.  So I have been struggling with some time management and ability to focus the last couple of weeks.  Which makes it really hard to keep on track/schedule.  Part of that is my party planning, see I was wanting to do a birthday party for myself this year but it's hard with so many of my friends having kids birthdays the same week, and it sucked and I do get a bit depressed on my birthday every year.  But this year I decided screw it I'd rather have a Halloween party anyways so yeah I decided I am going to have one of these instead and wow the amount of time spent on Pintrest looking at stuff is insane and makes you lose track of time.  But now that I have a better grip on the party and what needs to happen I am getting back to myself and I hope to get things on here back to normal too!  Anywho sorry but thanks for sticking with me!

Now today I am so excited to share my thoughts on not only a new release last month but a debut author as well.  Brave Enough by Kati Gardner.  The cover was so beautiful it made me click and then the summary just touched my heart and that was it for me I knew I had to get my hands on it.  I was lucky enough to snag myself an ARC from NetGalley in exchange for my honest review so here goes. 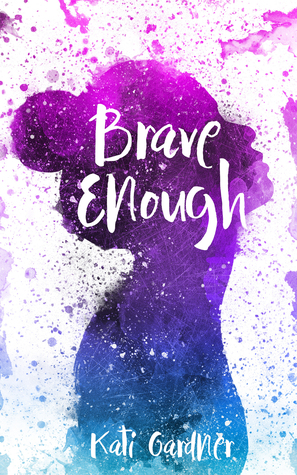 Cason Martin is a prima ballerina at the Atlanta Ballet Conservatory.  The best.  She has spent her life at dancing t was never a choice with her mother being the artistic director making all of her decisions.  Cason is dedicated and willing to do whatever it takes….even pushing past pain and injury.  Though it is much worse than she imagined.  On the flip side Davis Channing is struggling in his own way, having beat cancer and living with his drug addiction that nearly killed him.  Staying clean isn't always easy when your past is always there in front of you.  Cason and Davis hardly know of the other but their worlds collide that all changes.

I really enjoyed this book.  It wasn't super plot / action driven but more a journey story and I can enjoy those.  I could tell as I read, even before reading the authors note, that this is a very personal story for the author wanting to see people like herself represented in books.  They way she writes it shows this depth of understanding and authenticity which is pretty great.  There were some things happening which I thought were awesome as the story moved along quickly for me but it felt more like a misplaced.  Not bad just felt a bit odd story wise after, like a too soon climax.  This also happened a few times when a chapter would end and we'd time jump.  Sometimes we didn't immediately know and it was from things mentioned or things happening around them that made you think you missed something then "it's been "x" amount of weeks since my audition" so you realize they jumped.  This was okay and again the story went by quickly just at times it was a smidge jarring.  It also took away some of the moments between Cason and Davis and while I totally loved them together it was a bit sudden.

Cason and Davis are both struggling with major things.  Things I don't see as much in my YA reading and I was happen to have it front and center.  I loved the idea that just because of cancer or drug addiction the struggle of being more than that label.  How you might have described yourself one way, now the first thing someone sees is something else, something you can't control.  Understanding from both of their heads what it is like in their struggles from small things that are their new every day to the larger more complex issues really came through.  However, while I enjoyed them as characters I thought they could have been a bit more developed.  Like they did that to themselves as well, confining themselves to one thing.  With Cason it makes sense before she was a dancer, that was her sole focus in life, making things that much more real for her.  But with Davis we don't learn much about him aside from cancer and drugs.  I would have liked to know more about him as a whole before the drugs.  I got enough of him and his character to adore him and want things to be better for him but still a bit more would have rounded him out more.

I found the story pretty uplifting overall and again I really flew through it.  I enjoyed it and was smiling for a vast majority of the time reading it and yes I admit to tearing up as well at times.  Things can get dark but that is the nature of life.  I really enjoyed this story and while there were a couple small things I think could have made it even better nothing I "disliked" as it were turned me away from the story just made me want more and that is a huge yay because who doesn't want more of what they like!  I would recommend this for sure!  This journey was one I am glad I was along for the ride.