Hello again my readers!  I have for you as the title might have given away a review for Dualed by Elsie Chapman.  This book I got courtesy of NetGalley and Random House Children's Books.  Thank you. 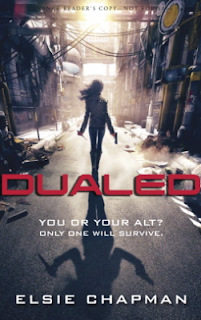 This book takes place in a city of Kersh, a safe haven of sorts.  It's a safe haven from the war but it comes at a high cost.  Everyone has a genetic Alternate, a twin raised by another family, and to live in this safe haven you have to kill your Alt before your twentieth birthday, 30 days after activation.  So to live a life and have a life or even a family of your own as an adult you must murder a form of yourself in a way, 'You or Your Alt, Only One Can Survive' is the tagline and it is compelling.

We follow the story of 15 year old West who has trained as a fighter, in her school classes and on her own but she is by no means able to afford the high priced schooling offered.  She prepares but a tragic misstep shakes her confidence.  Stricken with grief and guilt, she is no longer certain that she's the best version of herself and worthy to be the one to survive.  If she has any chance she has to stop running from everything, her life, her Alt, and love, because it has the power to destroy her.

West is a strong female character for this story, she has strength but she is also very vulnerable.  She has a lot to deal with and she has very human and very natural emotions.  She's strong and fierce until her confidence is shaken and she is left questioning everything in her life.  That is some pretty heave stuff for a teenager, even if you grow up in this world and learn how to kill in school, it's still a harsh reality.

I've read some of the reviews and am shocked that some people didn't get as into it or felt it was too bogged down.  I read this book and really enjoyed it.  My main issue, only dislike, was that the chapters are pretty long and that's nothing against them just that I tend to like the shorter chapters as I can sit down for a spare 10 mins at work or while doing other things and say just one chapter.  Or my more likely, just one more chapter…8 chapters later…just one more really.  It's easier to do that with short 10 page chapters, but these not as easy and I was left having to leave off in the middle of things which is very unnerving for me.  This by no means too away from the story.  Just a reading preference of mine. 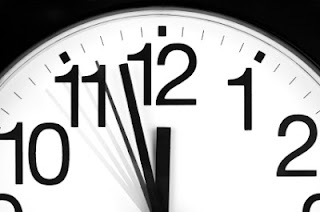 The story in itself was compelling.  How do you cope in a world where you are forced to kill before the age of 20 or die?  What is right or wrong?  Who says the better one lives?  I liked the ideas in the book and I was compelled to read through it as quickly as my schedule would allow.  I wanted to know what was happening with West, would she face her Alt?  Would she survive?  Then you have the Chord who I adore.  How can you look at someone the same when their face is not only the friend you've known for so many years but now also the one that took away something precious?  On the reverse, how do you make up for it?  What is done because of a promise, what is done for ones own will?

I loved being inside her head.  She has a very rational train of thought, it gets clouded by everything else of course but it starts off rational.  I know I have these moments all the time. I start with a clear and defined plan that makes perfect sense but then…well the things you can't account for mess with your game plan.  I liked seeing that, I'm also using it as proof that I'm not crazy.  So we have a good story, so great action that is thought out and very impactful.  I could see each move in my head as it happened like a mini movie.

Anyone who was a fan of sci-fi action YA enjoy this book.  There is major violence, if the blub wasn't clear enough but I give it a solid 4.5 Knives.  Dualed comes out February 26th, check it out and let me know what you think.  If you had an Alt…would you survive?
Posted by Eve at 10:54 AM