The Holders by Julianna Scott 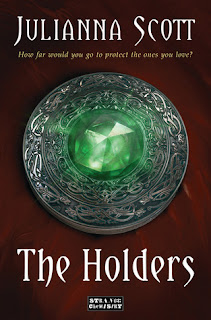 Celtic lore, special abilities, good vs. evil, and the beautiful castle on the Emerald Isle.  Sounds great right?  Then buckle in for The Holders.  This book comes out March 5th this is a review of the ARC as always thanks to NetGalley and Strange Chemistry.

We follow Becca to St. Brigid's where she can help Ry settle in and make sure she approves of it.  Then there is the attraction to the handsome, sweet, man who convinced her to give this place a shot.  She is drawn to him and she doesn't know why, okay minus the obvious, she thinks it a silly crush, but he is a good man to give her answers.

I really liked Becca.  I frequently forgot how old she was as she is very mature.  It was refreshing to see a character like her, who is only 17 but is very well put together in a way that seems real.  Now she does have her moments, most of which involve her father, Jocelyn, who skipped out on them when Ry was born. Understandable daddy issues, but the rest of the book she is very engaging and takes things in stride but she is also vulnerable. Real.

The rest of the cast are great as well and really play well with one another.  I loved the bickering between Mr. Reid and Mr. Anderson, the girlish fun with Chloe, the grandmotherly affection of Min, the aloof and abrasive Jocelyn, and so many others.  Alex, and his compassion and good heart, he is a central player and I fell for him.  Each play their own parts but they are each memorable and rounded. 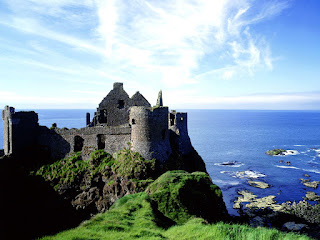 This story has a little of everything really.  You have your drama, your adventure, your supernatural elements, some action, and oh my favorite a beautiful and believable romance angle.  The characters bring the story to life, which I admit is slightly predictable for the most part but done in such a way its more about seeing how they get to that point than what that point is.  The story does center around discovering a new reality, that there is a thing called Holders and everything that their world entails.

Along with the new world of Holders we also get to visit the Emerald Isle.  Always been a place I've wanted to see and this sparked more ticket pricing on my end.  Now we don't get too see much of the country itself but the pieces we get as well as the school itself are amazing.  Must take this chance to mention I also have a thing for castles oh the history, the stories, and dare I say it the possibility of secret passages.  Sorry school girl moment.

I honestly cannot think of anything I dislike about this book.  A little more explanation on certain areas sure, but as this is a series I figure some things were left vague on purpose.  Becca and the reader can only take so much at a time.  I will say this surprised me.  I admit I've been shocked on more than one occasion but I was expecting one thing and got something else, which was way better than I was thinking.  More like hours not being able to sleep dreading it was more accurate.  So happy I was wrong, though in hindsight the way it worked out, so much better the way it was.  Plus you know if I get that worked up over something that MIGHT happen then clearly I'm invested in the characters.

The Holders will hold you, pun intended, and not let you go until the last page and then you want more.  I did just think of a dislike, I hate to wait as usual.  So if you like mystical powers in faraway lands with good characters fitting a great story check out The Holders, by Julianna Scott, March 5th.
Already read it?  Tell me your thoughts.  Questions, comments on the book, me, life, castles, super heroes, anything, leave them below.