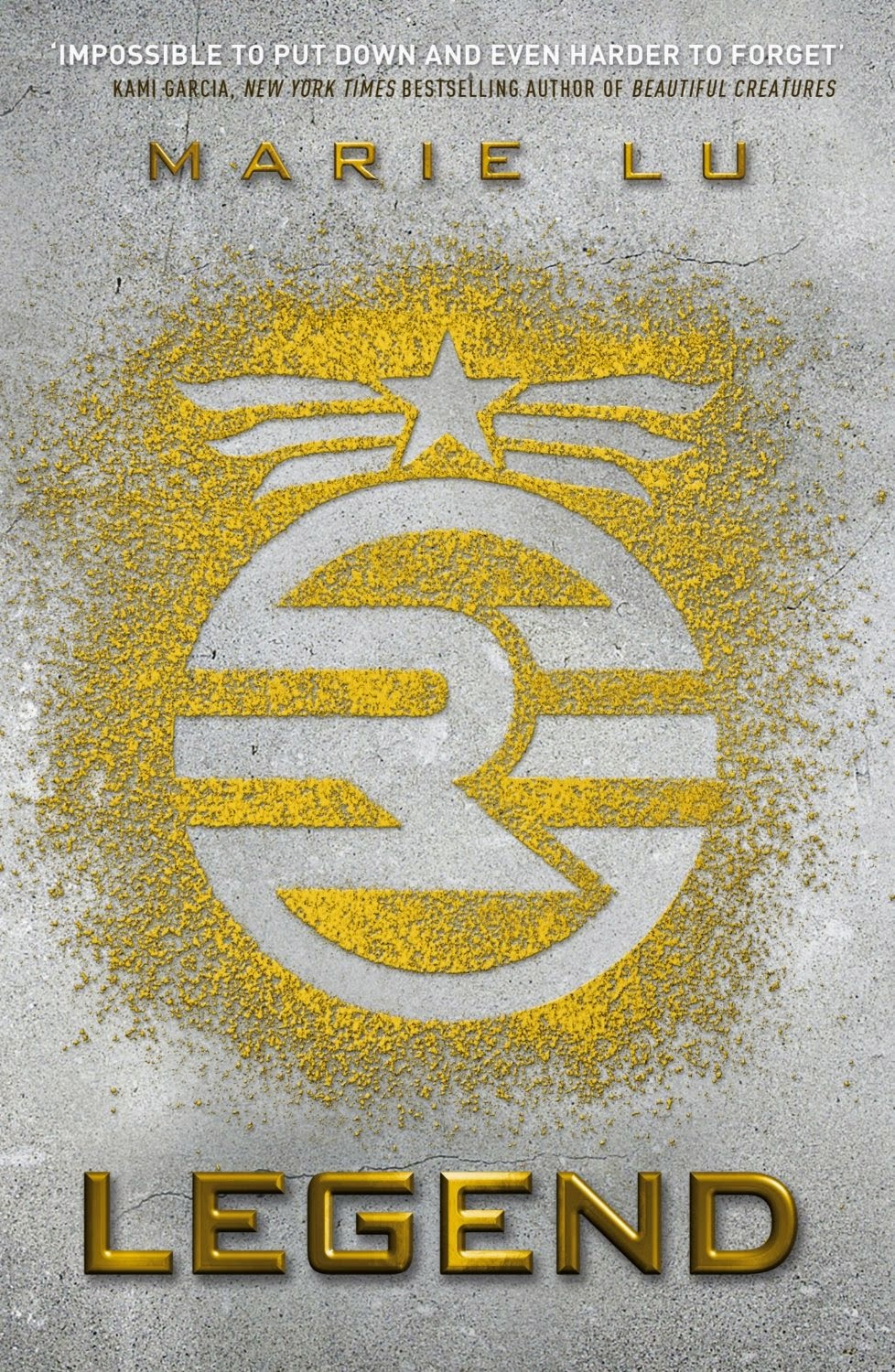 So I know I said Monday...but yesterday I left my apartment for one thing then kinda didn't come home until bed time.  But better late than never.  Let’s discuss this little series that starts with Legend by Marie Lu, who is ubber sweet by way.  I’ve read the entire series at the end of last year and WOW.  The last book, the whole series if I’m honest, made my top books of 2014 and today I am finally getting my thoughts about the first book, Legend, and the series as a whole down.  I’ll keep the first part spoiler free for those who are as behind as I was.

The story is a futuristic dystopian that takes place in what used to be the United States, now it’s divided into the Republic and the Colonies.  Both are perpetually at war.  The story is told from two sets of view, one from one of the Republics wealthiest districts, June, who is a prodigy and is expected to rise to success in the highest military ranks.  And then we have Day, the country’s most wanted criminal who was born in the slums.  They are from very different worlds but their worlds collide when June’s brother is murdered and Day is the prime suspect.  Day races to stay alive and save his family while June is looking for revenge.  But as things progress the two uncover secrets and the truth about what sinister lengths the country will go to keep its secrets.

June and Day.  Okay I admit one thing that in the first part of the first book was that they were so young, 15 I believe.  That seemed a bit young for me with everything they were going through but once I ignored the age thing I pictured them a bit older and all was right in my internal picture.  Though I think that may just be a me thing.  Also, something I thought was pretty cool, in the physical copy of the books (I don’t know if it would do this on e-readers) is that as it changes from Day to June it changed ink color.  I found it pretty interesting that the ink color also matched the books covers (Legend= Gold, Prodigy= Blue, and Champion= Red).  Noting to do with the story really but the attention and unique detail made me smile. 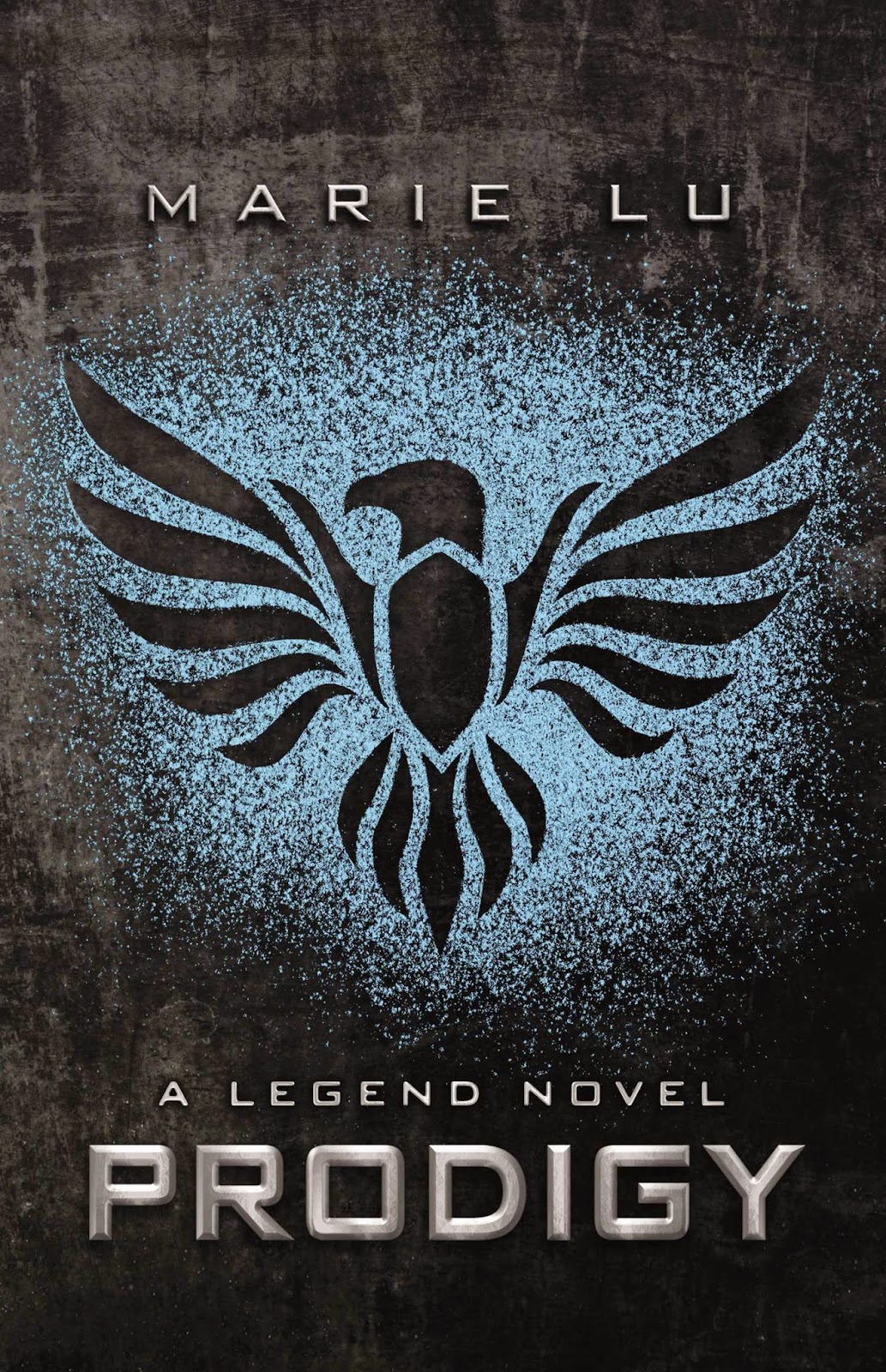 The first book is packed with so…much.  We fall into this world and we have two characters we see the world from, two completely different people.  The way the world of the Republic is for someone on the poor side and someone raised with the best of everything.  We see the motivations behind each of their actions as we go along their journey.  It’s hard to pick a side when you want to agree with both of them.  Each one is biased over their past experiences both good and bad.  I loved the dynamic there.  Getting to know both June and Day, seeing what made them tick and watching as they developed over the course of the series was great.  The entire world is like one big nightmare but still I couldn’t help trying to figure out if the system would work for me or against me.

Action galore.  Day the criminal is always working on a plan, always coming up with something to provide him and his friend and family with food and supplies but also ways that fight against the Republic and make him the people’s hero.  June on the other hand is a finely tuned machine ready for action, just itching to use her schooling and show she the best.  Be it brawls, chases , flash backs, break-ins, break-outs, whatever these two characters like to be moving and doing.

With the action comes plenty of meat on the bones of the story.  There is a lot of political motivation, revolution and rebellion in the story that spurs it along.  And still there is a balance with learning about them and watching as the characters get to know one another both before either knows the other and after.

That’s all I can really say without being a bit spoilery so if you haven’t read the whole series then you should skip right to the comments to share your thoughts and come back to finish reading once you’re all caught up!

LOVE!  I had to share.  I LOVED this series.  Everything from the characters, June and Day, down to the lesser supporting characters, the ones we keep and the ones we lose, the different structure, the world itself and what devastation it has fallen into.  It’s hard to pick a favorite part but some of my favorite parts include the way the world was portrayed.  Neither system, the Colonies, the Republic, Antarctica, each system seems to have its own flaws, there is no system that is 100% great to everyone.  To be able to write a balanced world and not skew it one way or the other for the reader is a real treat; to be shown so much and allowed to make up my own mind with the characters. 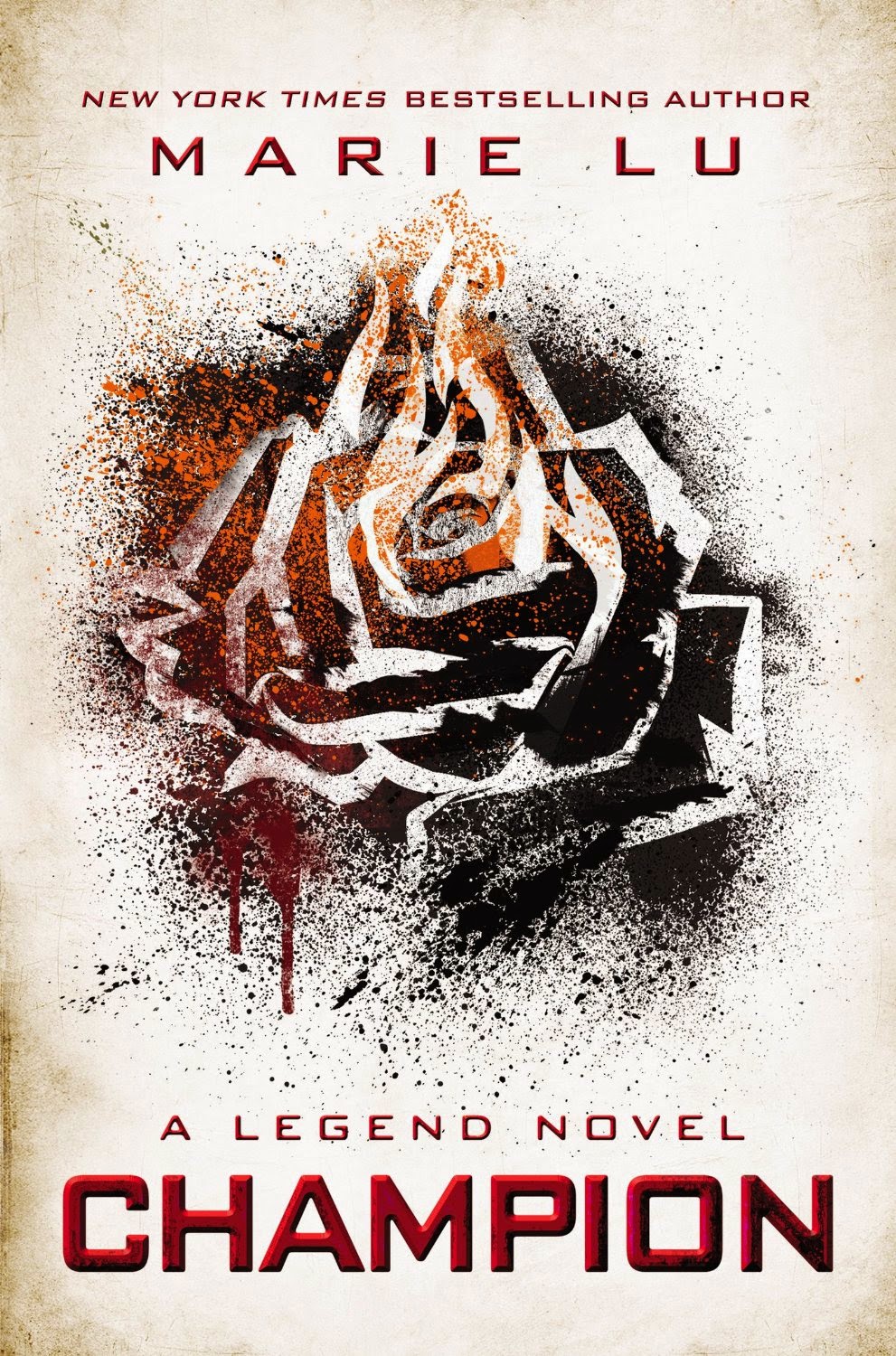 Another favorite is the development in both Day and June.  They go from complete opposites, enemies really, with such skewed views of one another to be much closer.  They both have lost so much, and in the war, in a place where everything isn’t sunshine and rainbows that is important to the development.  Now yes, I do feel Day suffered more losses than one should have to in their life.  But it changes them into who they are through each book, they continue to grow and change.
Amazing.  And one last thing.  The ending!  I won’t spoil it but the last little bit I was beyond myself thinking it just could not end that way, then we get that fast forward and it was a balm to my heart.

So if it isn’t clear I rate all three books, Legend, Prodigy, and Champion 5 Stars.  I hope you all will take the time to check them out and give them a chance.  I look forward to reading Marie Lu’s other book series that has started, The Young Elites.  Please share your thoughts down below on the Legend series, if you’ve read it, want to read it, whatever I love talking books and want to start a discussion!
Posted by Eve at 8:38 PM