Angelfall and a new breed of angels 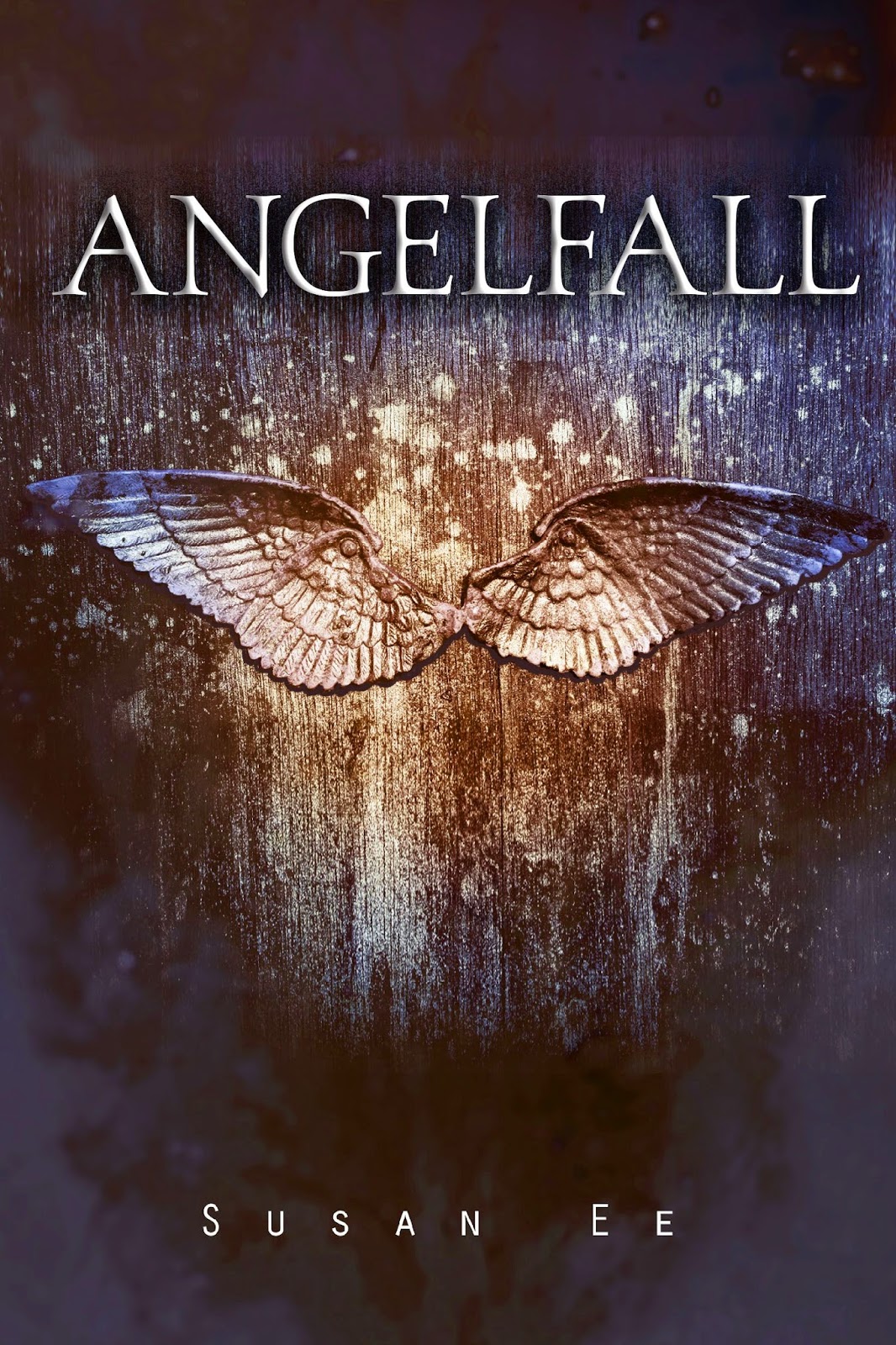 Normally I’d say my being behind in reviews is a horrible thing, but in this instance it worked out pretty well.  I read the first two books, Angelfall and World After, in the Penry & the End of Days series by Susan Ee back in November 2014.  LOVED THEM.  But as I’ve mentioned the end of 2014 was gone in a blink and I have no idea what happened.  So I was working on my review and I find that the cover for the next book End of Days is coming out tomorrow (today since I won’t post till then) and I can share that with you too!  Exciting new for me.

So jumping right into it the series is about angels who have come to Earth to demolish the modern world.  It’s been about 6 weeks, so everything is in a weird kinda place, people are still in shock and adapting but the world has also already turned cruel as the world falls around them.  We focus on Penryn, a 17 year old girl just trying to keep her helpless little sister, Paige, and her crazy mother safe and alive.  Then when her sister is taken by a warrior angel.  Penryn will do anything to get her sister back.  Even work with another angel, Raffe, one she can make a deal with.  He is broken and wingless on the street in bad shape.  He’s never needed someone before but now he is being rescued by this teenage girl.  Can these two enemies learn to trust one another enough to survive together long enough to reach the angels’ stronghold in San Francisco for Penryn to rescue her sister and Raffe the chance to be made whole again?

I heard several BookTubers talking about these books and had seen them always on the Amazon pages.  I decided to check them out, wanting to know what they were about for myself.  Then as luck would have it as I ordered the books, I found out my little brother, okay he’s been taller than me for 4-5 years now even though I’m 5’7 still I’m older, thus he is my ‘little’ brother, has read Angelfall.  He read it free on Prime and then was asking me to borrow World After.  I advised I had only placed the order the previous day so I didn’t have it yet and he’d have to wait till I read it.  I’m picky about lending out my precious bebes to people but no one borrows it until I’ve read it.  Clearly.  So to get my brother super excited about a book I knew it had to be really good and I counted the days for it to arrive.  I was not disappointed.

I’ve read several series involving angels in the past.  I have nothing against them but they aren’t usually my favorites.  Mostly because they all seem similar and focused on the same aspects.  I can enjoy them sure but not like these.  This series is completely different from any angel book I’ve found.  Angels are creatures of good, everything is turned on its head.  The journey the characters make is the central focus.  A quest type of story with the ultimate goal for our heroine and she is forced to form an alliance with an unlikely source and a surprising semi-friendship if not mutual respect blooms. 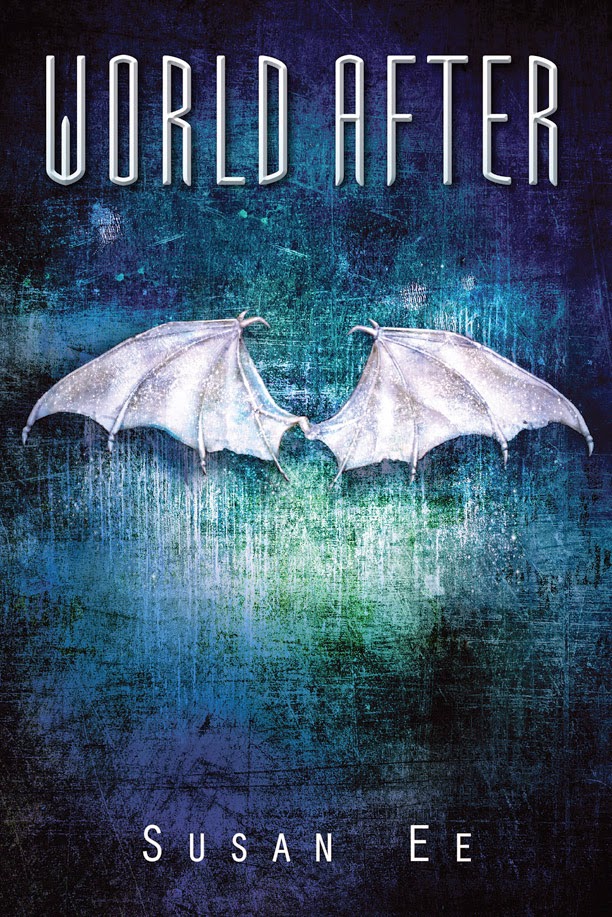 Penryn is a tough girl who had to grow up fast.  Not strictly because of the angels but her family.  She is purpose driven and struggles with everything happening around her but she refuses to fall apart.  I like her and from the start I was rooting for her.  On the flip side we have out wounded angel, Raffe, who you’re unsure of.  Angels after all are painted out as evil heartless.  He is rough around the edges for sure but he grows on you.  I felt bad for him just as much for Penryn, to go from soaring through the sky to being wingless would majorly suck.  The way they interact with each other is beyond great.  So different and yet very similar.  Very dynamic. Each having to step out of their own prejudices to learn about the other enough to make it through.

Now aside from a unique and original take on angels, for me there was so much more.  An added dystopian and even sci-fi element.  There is tons of action and misadventure along the route with tons of things to straight freak you out.  Really.  There is some creepy stuff described in the book and normally that doesn’t catch me but I was so caught up in the story I wasn’t prepared.  Also as a random side note the wonderful Susan Ee added random moments/items that just completely made me stop and think.  Might just be me but yeah I stopped reading for a few minutes to Google a couple things, not spoilers, you know how I hate those, but things mentioned, survival aspects, that I wondered about the validity and yeah they were legit.  I give her high props for making me Google and also for having clearly depicted it realistically.  It’s the simple things that make it so good to me.

I mentioned I read both books that are out.  Now I have to talk about things that I feel would slightly spoil Angelfall if you knew before reading.  You’ll be safe if you haven’t read or finished World After though.  So with that said, skip until you see the second set of ***** and you’ll be safe from spoilers.

You’ve been warned. Okay now if you are still with me and you have read Angelfall, or you’re one of those strange creatures I don’t understand who likes to be spoiled.  Either way thanks for sticking around.  Now I mentioned before about Penryn and Raffe and their getting to know one another.  Well you can’t really explain more without ruining it, the best part is really them getting to know one another and having to rely on the other without knowing if they fully trust them.  The different agendas and confusion over motives and past beliefs and such.  It’s such an amazing tangled mess.  But through it all we see that connection, they clearly have come to care for one another.  For me there was the slightest touch of forbidden romance, but just a touch.  It is hard earned and it feels natural.  The way they grow together through the course of the book.  But still just a smidgen because let's face it there is so much stacked against them.  Just love it, and it only improves in book 2.

And did I mention Paige.  Oh my goodness I was not expecting that.  I was prepared for so many different outcomes but that?  No way, was I in the least bit prepared for the end of Angelfall.  If you haven’t read World After yet get ready it is kicked into a whole new league with the sci-fi creep factor the end of  Angelfall left you in.  Oh and mom is a tad bit over the fence in crazy town and I spent half the books trying to figure out if it was good or bad for Penryn.  If I trusted her enough to stay with her or if I wanted her to find her own path.  What?  She’s seriously coco for cocoa puffs.  I love it.  Such a great dynamic and the girl it has turned Penryn into, those classes and such turned out to be okay.  Maybe there is something to be said for crazy.

*****End of SPOILERS*****
Spoilers are over.  Back to safe topics like, I am so ready for the next book, the last book.  I gave both Angelfall and World After 5 Stars and hope to give the next one the same rating.  Yep the next book in the Penryn & the End of Days book, aptly titled End of Days will be the final installment in the trilogy.  I have very high expectations for this last book and hoping to wrap up several open stories that have kept me on the edge of my seat thus far.  End of Days is set to release May 12th.  Also at the start I mentioned today was the release of the final cover.  It was released at EW and you can click here to see it and if you're caught up read a one page exert.

While I wait to find out what happens with Penryn, Raffe, Paige, and everyone else I'd love to chat about the books.  Please share your thoughts below as usual I love hearing what everyone has to say about books. I hope to have more up for you soon.  Enjoy!
Posted by Eve at 7:00 PM