Hello happy readers, it's Friday.  Where does the time go?  I feel like the week just started and now it's over.  Sigh.  So I did end up getting up and dressed long enough to go out and see The Huntsman:  Winter's War during the advance day showing since I have to work this weekend.  Also I realized I haven't done a straight movie review other than book to movie ones in a long time and thought this would be fun.  So here goes. 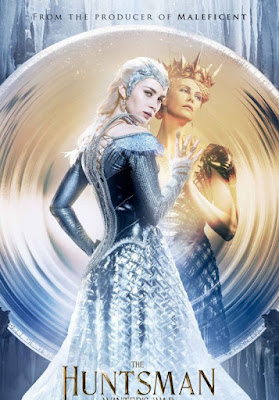 The Huntsman:  Winter's War was one I knew I wanted to see even if I didn't know how it would work given how Snow White and the Huntsman ended.  Spoiler Alert:  Snow beats Ravenna.  But from the trailer it's the story we don't know, I was thinking a prequel story which after seeing the full trailer made sense.  Having come out of the movie I now see it as both a prequel and a sequel.  The story starts prior to the events in Snow White but then as events happy they jump forward in time to a point after the events in that one.  It was done very well and all flowed wonderfully for me so if anyone else had a slight concern on when it happens know it makes sense.
We get to meet Ravenna's sister Freya and how her heart is hardened and she becomes the Ice Queen wanting an army of Huntsman who harden their hearts.  She honestly thinks taking in children to train as warriors and teaching them love is an illusion and to be hardened is good.  She's the type of villain who you want to root against but at the same time you kind of understand given her history making her complex.  The love that blossomed between her two best Huntsmen Eric and Sara is not something that can be allowed.  I enjoyed Eric's character in the first movie and I enjoyed getting to know him better and see how he became the Huntsman I knew who helped Snow and the same on getting to meet his Sara.  The chemistry between them was pretty steamy, they are both amazingly good looking people for sure, but it was more.  They way they went back and forth and challenged one another I could see them as a perfect match for one another.  Plus Sara is bad ass!

The plot really held my attention and there was lots of action happening from training, battles, ogres, a quest to find the mirror, and more.  There is also some comedic relief in there as well which I found myself laughing at, not just the dwarfs who did seem there for more laughs than much else, they were interesting and they seemed familiar in the best way.  There were other aspects of the first movie that we see in this as well from the settings in the woods and the mystical type creatures to the mirror itself which was the most unique way I ever saw the mirror portrayed.  The visuals in this are on point.  The magic and how both Freya and Ravenna's powers are portrayed to Freya's mask (love) and the world in general.  High points there for sure for the beauty of it all.