Hello happy readers!  So some of you may remember I’ve talked before about the Acceptance series by Sarah Negovetich with the first book Rite of Rejection and the sequel Rite of Revelation which I reviewed and really enjoyed.  I also had the pleasure of interviewing her about the book (here if you'd like to see her picks for casting) and then last year I got to hang out with her during UtopYA which was pretty awesome.  The final book in the Acceptance trilogy Riteof Redemption came out just Tuesday (6/6) and I had the pleasure of receiving an early copy for review to share my thoughts with you all and join the blog tour!  I also had my copy on pre-order.

At the end of the last books things were bitter sweet.  He had some major losses but we also had some victories and a sense of home among the Freeman.  The Cardinal is bound and determined to hunt her down at all costs.  When his men start to attack other Freeman villages to that end she knows without a doubt it will never stop and no one is safe from him.  She is the face of resistance, the only one people have seen stand up against him with her broadcast and escape and now it’s time to convince others it’s time to fight.

This series has come so far that to think in the first book Rebecca was sent to the PIT by the Machine predicted she would be a horrid criminal.  Now having found out the Machine really pushes out those less than perfect or more common those who question the Cardinal and his system in any way.  Weeding out the undesirables basically.  Now as one ready to fight to remove him and his machine maybe the Machine was right, she is breaking some laws now.  It all plays back to the initial book where you wonder if they were always meant to be criminals or if they only turned to criminal type behavior because they were put in there?  I love how it all plays back around.

It’s been two books in the making but the characters we grew attached to in book one, and the ones we found and brought into our family in books two are ready to take on the Cardinal.  It’s scary and will be hard but they know it’s no longer about escaping and hoping to find peace.  He will never let them have peace, so they must free themselves and the world from his evil.  It’s almost hard to remember where one book ended and the other picked up as the whole series flowed so smoothly between them into one seamless story.  We spent most of the last book in the Freeman villages whereas the first we spent mostly in the PIT and in book three we are constantly moving giving us new and exciting places to learn about and discover, growing the world.

The characters arcs from start to wherever they end up, they have all been through the wringer.  We’ve lost those we loved and we have gained some along the way as well.  While the books do seem bleak and dark at times they are also full of hope and love in a way that helps level them out and give the characters something to fight for.  Some have been changing constantly and others have had more subtle changes along the way.  Loss and grief are something many of the characters face and how each one reacts differently is so true to life it hits home.

The first two books were good but this conclusion really amps up what has been building in the back of the series and leads you to what I’d say is a very satisfying conclusion.  It manages to have it all and keep you guessing along the way.

Sarah Negovetich knows you don't know how to pronounce her name and she's okay with that.

Her first love is Young Adult novels, because at seventeen the world is your oyster. Only oysters are slimy and more than a little salty; it’s accurate if not exactly motivational. We should come up with a better cliché.

Sarah divides her time between writing YA books that her husband won’t read and working with amazing authors as an agent at Corvisiero Literary Agency. Her life’s goal is to be only a mildly embarrassing mom when her kids hit their teens.

You can learn more about Sarah and her books at www.SarahNegovetich.com or follow her antics on Twitter @SarahNego. 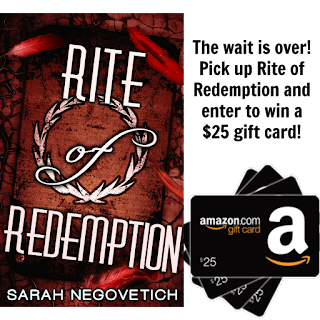 a Rafflecopter giveaway
Posted by Eve at 8:01 AM