Hello happy readers!  So quick heads up there is still a giveaway open for the SIGNED copy of The Last Star by Rick Yancey until 6/6 here so don’t forget to enter!  Now back to matters, you may have noticed that I’ve been working my way through the Selection series by Kiera Cass.  I have finished the original trilogy now and the bind-up of novellas and now plan to finish the newest two books in the series.  Today I’m going to be reviewing The One (Selection #3) and Happily Ever After the novella bind-up so there will be spoilers for the first two books just be warned. 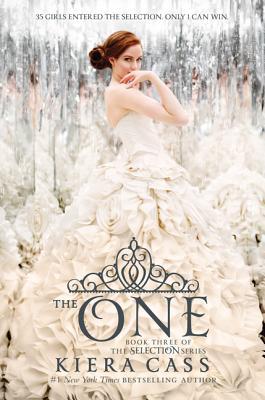 So when we left off we found out that the founder wasn't as awesome as we first thought, rather vindictive to his own family really.  He created the caste systems and after a bout of misunderstanding, anger, and hurt feelings America pitched dismantling the castes as her 'per project' on air to all the country to see.  As one can imagine the king was not pleased.  She was almost sent home but a raid by the rebels forced America and Maxon into a safe room together for the night where they could get some things cleared up between them and give Maxon a good story for his father to let her stay.  Things aren't that easy though because now she has broken Maxon's trust and he wants her to earn it back.  Things both inside and outside the palace are heating up as America gets closer to being the one, something she never thought she could want and now as she is close to losing it, him really, she will have to stop sitting back and waiting and fight for what she wants.

This series I marathoned pretty closely back to back mostly listening in audiobook form.  I only ever got upset with America in this one finally for a few of her 'agh' moments.  At the time I remember remarking that I was so irritated with her at one point near the front but as time has let things sit I realize it was less annoyance at her and more my desire for things to go my way quickly in the story.  America did some things I wasn't thrilled about sure but the same personality traits I liked in the first two books are what got me upset in this one.  She is the same character who is coming to terms with her past and her present and understanding what it is she wants and who she wants to be.  That said I also had a few moments of annoyance with Maxon as well but that is par for the course when mix-up and misunderstandings keep popping up and interfering with what you want to happen. 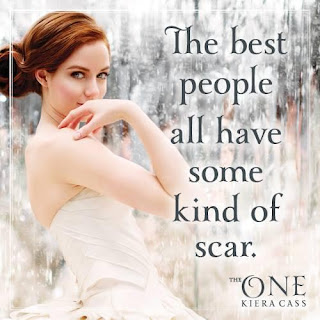 That said I was really excited to meet Georgia and August and learn more about the rebels and the country and where it stands overall.  There is much more going on than a simple selection and Maxon has more to worry about than choosing the woman he wants to spend the rest of his life with and also with how he can save his people.  Neither task is made simple with interference by pretty much every outside force imaginable.  Violence erupts and we discover more and more that leaves everything in question.

Overall as a series I really enjoyed the ride and the way things from all the books would come back into play or something I remembered thinking it was important coming back up later proving me right.  Lots of things happened.  Emotions run high and things are intense.  Overall while I found the series as a whole somewhat predictable I didn't find myself caring because it was still fun and while I knew what to expect how it got to those points were always interesting. 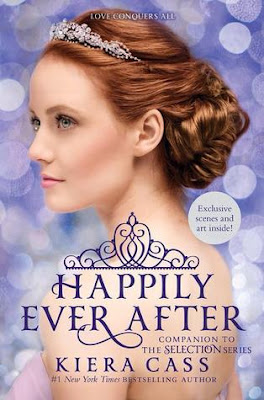 Now for Happily Ever After, the novella bind-up.  I dove into this directly because I knew it contained a story of where everyone was as well as scenes after The One.  I read the novellas totally out of order but that was okay.  I think my favorite, pun intended, might have been The Favorite followed by the after scenes and even the scenes from Celeste.  None of them are necessary to enjoy the series by any means they only add to them and give a better sense of some of the characters and I have to say The Queen may have been the most interesting one just to have that glimpse.  The Guard was my least favorite of the stories and it wasn't that I disliked it but more that I like Maxon more and even seeing Aspens side of some things didn't change much for me so it didn't really add much for me.

That's all for this I look forward to continuing on and finishing the last two books, the final one should be arriving via Amazon this week.  I would love to hear your thoughts on the first three books and how everything played out.  How everything ended?  Did you see it coming?  Were you rooting for it? Tell me in the comments below.