Hello happy readers!  I love books as we all know but I also love all different forms of entertainment like TV and movies.  As I have been seeing more and more movies again I have decided to go ahead and make this a bi-weekly post to share my quick thoughts on the movies I have seen in theatres (because I’m on nights and Netflix is my friend when insomnia kicks in).  So here goes: 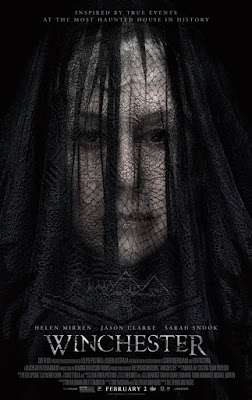 This is the story of the Winchester house that is said to be the house spirits built.  Massive and complex that was constantly being built on until the day she died.  It’s a horror story following a doctor who is sent to examine the controlling percentage of the Winchester company to see if she is “mentally fit” to be in control.  Clearly everyone finds her a bit unwell.  So our doctor who is haunted by the past as is goes to see this woman and her home and gets more than he bargained for.  The house was beautifully done and it only bumps it up on my list of places I’d love to visit and tour.  It was a pretty good horror movie and while I don’t get scared or normally “jump” my friend did several times as did many people in the pretty packed theatre.  I would say it was a win with beautiful visuals, acting, and a haunting ghost story that is easy to follow and enjoy. 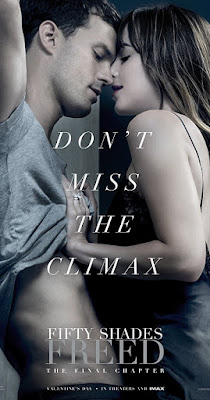 The final book turned movie.  I enjoyed it.  I really did.  Due to time I wasn’t able to re-read this book before the movie but it was still fresh having read it again last year so I may not remember some small little things that were skipped/changed but for me it was good.  I heard some say it was rushed or cut weird and such but I enjoyed the way it played out.  They cut some of the unnecessary stuff that didn’t really pay off as much in the books like the pre-nup issues with his family and his former sub club talk.  I would have liked to see more on some aspects and yes some of the scenes were trimmed down a lot but overall the overall story was there.  I would have enjoyed more with the lesser characters like Taylor, Mia, Jose, etc.  I’m still mad overall that they just cut out Dr. Flynn to a simple line in movie two that he was in therapy because I enjoyed him as a character.

I like the books but I also really enjoyed the more empowered version of Anna in the movies that she is able to stand up to him more where it counts.  Some changes I enjoyed were that Anna understood the danger right off and so many little fights about security guards were resolved.  The honeymoon was more happy fun than his protective issues.  I also loved some changes made to the ending though the ending is also where I had a few issues.   Mainly the reason I took half a star is because of the ending…that did feel a bit rushed and I didn’t get closure on some things mostly about Mrs. Robinson.  While I could appreciate the willingness to move on and focus on the good I was missing that ‘ah ha’ moment and personally an explanation was owed.  They needed more time to talk.  I am looking forward to seeing it again with my friend but even more when it comes to blu-ray with the “extended cut” and hopefully little scenes will be in there like with Darker having the pool scene!

*****
So looks like I only saw two movies so far this month but it was super icky weather out and frankly on my days off I had enough stuff to do around the house and books I wanted to finish the idea of getting dressed and driving in the ick was not appealing.  But I am seeing Black Panther this weekend!  Anywho I’d love to hear your thoughts on either of these films and what else I should see.  I’m considering Shape of Water.