Review of The Hunger Games 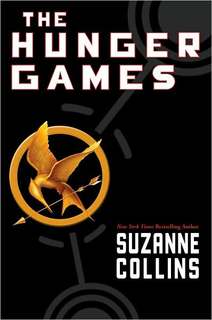 So I’ve been wanting to review this series for a while now but was holding off waiting for my friend who was reading to finish.  But patience was never my strongest asset so here goes.  The Hunger Games by Suzanne Collins get the highest ratings.  Way above 5 stars.  I was so enthralled in the whole series and literally counted down the days until the final book came out, which was 241 day after I finished the 2nd book the day after Christmas.
The Hunger Games, I had seen the book on display when I would walk by in Sam’s but never picked up.  Then one day a friend of mine told me how great it was.  We’d recommended books to one another before so I picked it up and read what it was about.  A world with 12 districts each getting worse off with District 12 being the lowest of the low, all centered around the Capitol.  Each year due to a previous uprising years and years ago each District must submit one male and one female tribute to the Hunger Games, a televised event where the tributes basically fight to survive and fight to the death in the arena where only one lives.  Dark.  Well the main character is Katniss Everdeen.  She is from District 12 and doesn’t want to be in the games but when he sister’s name is picked she volunteers.  Along with Katniss from District 12 you have Peeta, whom I completely adore. 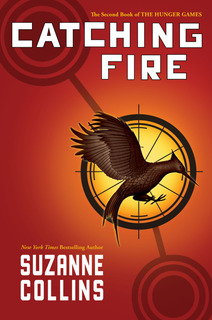 The first book is the run of the games.  From the moment they are selected through the training and the parading around that mirrors a bad reality TV for the Capitol, all the way through the games.  The books are violent, it is a fight to the death after all but there is so much more than that.  I was captivated, I couldn’t put the book down.  When I got the book the 2nd book Catching Fire was already out so I got both, not wanting to have to wait when I finished one.  Well I started reading the first book Christmas Eve night and couldn’t put it down to sleep.  I eventually passed out on the book, having not slept for over 48 hours by then.  I was woke up bright and early…well dark and early since it was Christmas and my little brother had us up at 5am.  I made my sleepy way out to the couch with book in hand and continued to read through the opening of Christmas presents, when I wasn’t unwrapping I was reading.  After all was said and done I was still reading as my family cleaned up around me and prepared for my family to show up.  Me I was reading, I did manage to start to get ready for company but as they showed up I kid you not I heard my Aunt saying ‘Where’s Eve?’ I looked down and have 2 pages to go.  I finished them very quickly and then happily went to join everyone where I proceeded to talk about this book. 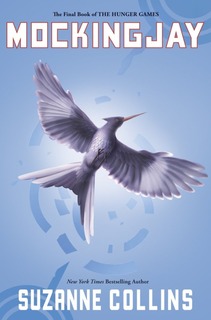 If that isn’t enough high acclaim then let me tell you more about the story and not my obsession.  The world itself is creative and different but frighteningly real enough that you wonder could this really happen to us?  The characters all have their role to play and with the heroine Katniss you feel everything she is feeling all the pain, uncertainty, emotions, its amazing.  And Peeta, I already admit to adoring him but he is written in a way that made me fall in love with him.  He is kind and caring but also able to take care of some things.  There are other wonderful characters also such as Gale, Haymitch, Rue, and so many others with 24 tributes all with different traits and motives it gets pretty intense.


At the end of Book 1 you want more.  I can’t really go into much about the other books because…well it would give them away and I’m anti-spoilers.  So let’s just say Catching Fire is just as good as Book 1.  Now if I am honest, Mockingjay (Book 3) was great and climatic but the end did feel a bit rushed.  I was perfectly okay with it but with how long it took to get certain things to that point…it all happened so fast but even though I wish it had been a bit longer and had a bit more in some parts it didn’t take away anything from the trilogy.  Overall, I highly recommend them to anyone and I hope they enjoy them as much as I have.  Also as a side note, they are making a movie on the series and The Hunger Games is set to open March 23, 2012.  I for one can’t wait and will be at the midnight showing for sure.  If you’re read them tell me what you thought in the comments please.
Posted by Eve at 1:40 PM