The Book of Blood and Shadow- Robin Wasserman

I received this ARC book from NetGalley.com and as always wanted to share my thoughts.  For me this book wasn’t as good as some of the others I’ve read. 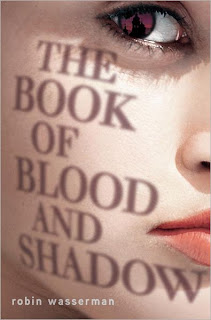 This book to me is essentially a mystery/thriller.  Centered around an old book that has puzzled everyone who has tried to decode it’s pages in the past 400 years.  Then it comes into the hands of The Hoff, a professor who everyone thinks is crazy.  For research assistants he has Nora a high school student who is from the wrong side of the tracks only at the high end prep school on scholarship, Chris, Nora’s best friend, and Max, Chris’s dorm mate and Nora’s boyfriend.

They all know Latin, which is a very important matter throughout the book.  The Hoff sets them out to try and translate the book, letting the boys work with the book and Nora to work on a batch of letters he has from Elizabeth Weston.  At first this feels like a meaningless task given to her because she is a girl when her translation skills are better than the others but soon she becomes entranced by the letters.  Elizabeth as it turns out holds the key.  Upon making the first real breakthrough in over 400 years everyone is excited.

That’s when things go bad.  People die, people are accused, blood is everywhere as Nora, her friend Adriane (also Chris’s girlfriend), and Eli (someone they know nothing about), team up with Max and race around Prague trying to follow the 400 year old clues that would allow them to find the parts needed for a mystical device that so many have died for hoping it would set them free.

That is a very general description.  I gave this book 3 stars on good reads.  I did enjoy the suspense and plot for the most part but at points the book seemed to drag making my eyes heavy.  Spread out through the book there are vivid descriptions of Prague and history lessons about the city and everything which to me felt like a brochure for travel.  Also there is lots of translation, something said/written in other languages and then sometimes translated.  Sometimes not, because it’s not meant to be understood at that point.  I get the idea but if the author goes through the trouble of putting it there for me in a different language I feel like I should be able to read it (hence pulling up Google which wasn’t as helpful as I would have hoped).

Also the characters although intriguing and some parts I adored, like the relationship Nora has with Elizabeth and her letters, how Adriane is so limber she just breaks out into a yoga pose or stretch at any moment.  But sometimes I felt as I was reading that I lost the character.  Again the story was pretty good it just wasn’t for me it seems.
Posted by Eve at 5:03 PM