The White Oak by Kim White 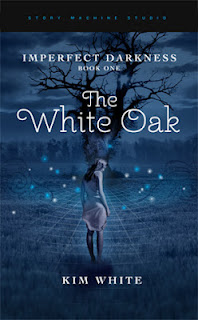 So I would like to thank Netgalley and Story Machine Studio for letting me read this ARC.  This is the blurb on Netgalley provided with a  beautiful cover:

In The White Oak, the first book in the Imperfect Darkness series, Cora Alexander falls through a sinkhole and enters the underworld still alive.  Her living presence threatens the tyrannical rule of Minos and the infernal judges who have hijacked the afterlife and rebuild it, trapping human souls in a mechanical computer-controlled city that lies at the core of the earth.  To survive, Cora must rely on her untrustworthy guide, Minotaur, an artificial intelligence built by Minos.  She is helped by a mysterious voice, and by Sybil, underworld librarian and author of each person’s book of life.  Sybil’s collection holds the key to humankind’s intertwined life stories.  When Cora’s own book is destroyed, Sybil gives her a magical golden pen and sends her to the underworld city to write her own destiny.  Along the way, Cora finds the ghost of her dead brother, Lucas, a genius programmer who alone is capable of finding the chink in Minos’s armor.  But will he be able to get Cora out alive, or will they both fall victim to the underworld trap?

Sounds super interesting and different right?  That’s what I thought.  Now this is hard for me because I haven’t given very many reviews on books I didn’t care for.  That doesn’t even seem right really, it felt, unfinished I guess.

Let me try to explain.  The blurb leaves you wanting more and let me tell you it starts off with a bang.  Straight into the action and story.  I was excited and the book did move along very quickly however when I finished reading I was left thinking, ‘What?’ I felt like the whole book was really only the beginning of a book.  With everything the blurb promised I was expecting more story.

The world described is very vivid and imaginable.  The scenery was great and I could picture it however the characters, the main character Cora in particular, I didn’t feel a connection with her.  I pretty much get that she is angry but that’s it.  I don’t have any invested emotion in her, and as a main character I have a hard time with that.  I felt there was slightly more character development with Lucas and even Minotaur.

This book is supposed to be part of a series so considering that I might say that the blurb should be revised to encompass only book 1.  And as a reader I would have felt better if this was part 1 of a longer book to me I just can’t get over that finishing it I felt like I was only about ¼ of the way through a story.

So this is hard.  I have mixed emotions about this and what to rate it.  I did enjoy parts of it.  So I’m going to give it 2.5 Stars.  *Note on goodreads.com it gets 3 stars because it doesn’t let you half a star and I rounded up.  So there you have my review.  This book comes out April 9, 2012.