A rounded out Movie Marathon!

As promised and getting back on track we have my latest movie marathon.  It's from Valentine's Day but still.  That's right I treated myself and was my own Valentine at the movies for A Good Day to Die Hard, Identify Theft, and Safe Haven.  Yep we have John McClane, whom I adore, a comedy, and a total V-day chick flick to cover, something for everyone. 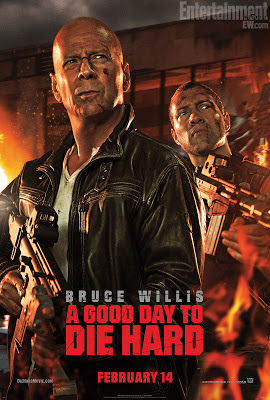 First and most importantly for me, A Good Day to Die Hard.  I've seen all the John McClane movies and frankly he is no questions about it awesome.  I love each one.  I just found out though before this one was released that the original Die Hard was released the same year I was born…I have not been watching that long for obvious reasons but have spend at least a decade enjoying and that is love.  So as you can imagine I had high hopes.

There isn't too much to say about the movie really, it was Die Hard.  There was haha funnies, action, McClane being McClane, explosions and the like.  This time though he was out of the country though as he goes to check on his son and in typical John fashion finds himself in the center of chaos.  He really does have atrocious timing if you think about it.  Now there was more chasing and guns and less hand to hand combat but I didn’t mind.  I always roll my eyes when they set the guns down to fight in movies then the bad guy cheats somehow and I think, 'if you had just shot them' so I didn’t have to do that at all.   Overall and to the point its Die Hard so if you've watched the others you must see this if you haven't…where have you been? 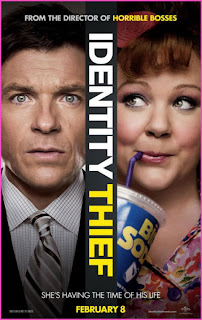 After some fun loveable action I decided to go for a full fledged comedy with Jason Bateman and Melissa McCarthy.  First this movie is not a family comedy if you somehow thought otherwise think again.  Small children be warned.

Identity Theft, is the hilarious comedy about a woman who steals others identities and her latest victim is Sandy, a nice guy who doesn't hurt anyone and is more of a pushover.  That is until this incident comes close to costing him his new job, then Sandy decides to go get her and bring her homes to clear his good name and his record.  Anything you can think of to go wrong does with this duo and their road trip.  Bounty Hunters, angry gang members, and their fighting against one another leaves no room for anything but craziness, with a few life lessons in there along the way.

Predictable yes.  Though it is a good laugh.  Plus it does shed light on how easy someone can fall prey to identity theft and how the all mighty authorities have their hands tied when it comes to helping you. 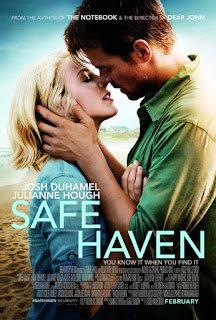 Now for Valentine's Day I decided to go ahead and see the girlie movie Safe Haven as well to round off my night.  I admit with sadness that this movie was almost full, much more so than Die Hard, which I'm attributing to the show time being later in the evening.  I like girl movies, and to my knowledge have watched all the Nicholas Sparks movies, I dig them. I like pretty much any kind of movie really.  So I never understood the reason why some people shunned 'chick flicks'.  Well I think this movie was the first I'd come to understanding.  This is the first one I'd seen in a packed theatre (minus my Twilight movies), or surrounded by females I didn’t know.

The movie itself is about a girl who runs from her life, literally, and tries to get away.  She gets out and she finds her safe haven in a small town.  She finds herself drown to a widower and it forces her to confront her dark and haunting past.

Don't get me wrong I liked the movie.  I did it was cute and fluffy and I enjoyed the performances by Julianne Hough, Josh Duhamel, and David Lyons.  What I did find slightly detracted from my enjoyment was my viewing companions as every single time something happened about 80% of the audience would 'awe' at anything remotely cute or sweet  or 'gasp' or 'shriek' out of shock or horror.  I don’t mean to be rude about it but after 20 minutes and 15 minutes of it had an added soundtrack around me it did get annoying.
So I do suggest that if you see it in a smaller grouping to fully enjoy the movie itself I still recommend seeing it.  I give it:

I just finished rereading The Host for the movie and am debating if I want to review the book now or wait for the movie.  Thoughts on that as well as the above movies put them below.
Posted by Eve at 1:12 PM