The Host: The Book


For those of you still with me, first, thank you so much.  Now the movie comes out this Friday and I was going to wait to post my overall review but I thought since I just re-read the book for the movie, and had never reviewed this before, I would do the book then on Friday post about the movie.  The movie comes out Thursday night where I am and I have the day off of work to go see it.

The Host by Stephenie Meyer is a sci-fi book about an alien invasion where pretty much all humanity  is gone.  The world is perfect.  Humans no longer run things, Souls do by living inside our human bodies.  They bring peace to the worlds they inhabit, minus the whole wiping out the current population that is.  However, there are still those few who fight to keep themselves. 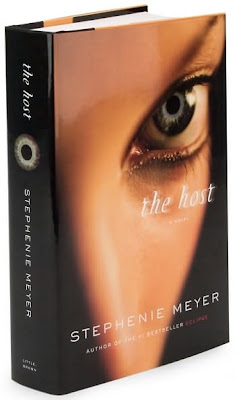 This sci-fi book is also at its core a love story.  I think that it is a very human romance in a very alien world makes it all the more powerful.  Seize each day.  Don't let love slip away when you have it. Melanie Stryder refuses to fade away after being captured and having a Wanderer, the invading 'soul' inserted into her body.  Wanderer didn’t expect to find the body's former tenant still there refusing to relinquish her hold.  As Melanie fills Wanderer's head, her head, with visions of Jared, a human who still lives in hiding, Wanderer begins to yearn for him.  Feelings, the souls find, are very powerful on this planet.  Reluctant allies, Wanderer and Melanie set off to search for the man they both love and finding something so much greater.

I liked this book because it really made you wonder.  Are the souls evil, yes they are aliens who took over your species but they didn’t do it in malice they did it to help make things better.  Are the humans who resist vicious animals because of their hardened outlook on life?  When neither side is truly evil there is a lot of gray area to play with.  Then there is the whole, two completely different characters, enemies and then allies, all in one head.  They have many things in common, but they also have very different ideals and wants.  Then there is the love cube.  Yep, not a triangle, that would be to simple, this is a complex cube that doesn't get stuck in a bunch of the love triangle stuff in other books I've read.  I also like the tale of living under the radar, surviving off the grid.

I found this book originally after first reading Twilight a few years back (I can't believe it's so long ago).  If you liked them, you'll enjoy the relationships and characters in this.  If they weren't your cup of tea but you like alien invasions or sci-fi with complex characters, give it a try.  It's a tale of love, alien invasion, freedom, but most of all it's a story of survival.  Now the movie does come out everywhere Friday.  I will be seeing it tomorrow at 9pm and will write my movie review post haste, and hope to have it up Friday or at the very latest Saturday.  Check back with me for that and check this book out!
Posted by Eve at 12:23 PM