The Host: The Movie 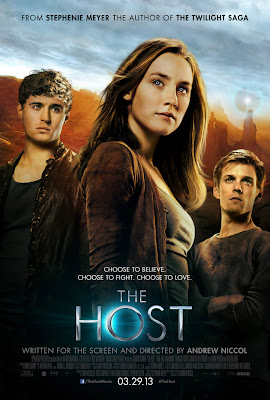 I saw this at 9pm Thursday night and was so excited for it.  I waited patiently all day for this movie and when it finally started I was bursting with energy and eager to see this book turned into a movie.  I had such high hopes and let me just say I was no disappointed in the least.  The movie was AMAZING.

I was excited and leery worried they would change too much from the book, but I still went in with an open mind because I loved the book and the trailer looked fantastic.  I admit there are some differences, which I expected.  Time wise, it is just over 2 hours, and the book is HUGE (619 pages according to goodreads).  So as an adaptation it was pretty awesome and short of making it 4 hours they put pretty much everything in there.  Now they could have explained a few things a little more fully, as one of the girls I saw it with the second time didn't quite get some of the things like how did they get here and end up taking over kind of thing but as the story takes place after it has happened it's not a major point, it's done and move on.

The cast was great.  I knew most of the main cast already and was excited to see them.  We have Saoirse Ronan, who I knew from Hanna and The Lovely Bones,  as our double lead playing Wanderer and Melanie, two different characters in one body.  She did an amazing job, she is an amazing actress and I couldn’t have pictured a better actress to play the part and give it the depth it needed.  To be completely at opposite ends and to have such compassion even in the face of what others would turn to violence for.  And as this is a love story as well she has great chemistry with her male leads and little Jamie, you could really see them as siblings.  Then you have Max Irons, from Red Riding Hood, playing our hansom, strong, confused, and emotionally tortured Jared who is desperately in love with Melanie but isn't happy with her body's return as Wanderer.  He played that conflict very convincingly I felt.  Next is Jake Abel, Percy Jackson and the Olympians and I am Number Four, playing Ian the other part of the love box.  He starts off like the others not trusting 'it' but then as he sees how Wanda acts he starts to see her as Wanda and not an 'it'.  He goes from enemy to protector.  Caring for the soul inside another's body…very complex.  Then I have to give special mention to William Hurt who gave Uncle Jeb amazing life.  It takes a special kind of person to play someone with such a mix of crazy and genies with the ability to add levity to a situation.   Even Diane Kruger, from National Treasure and Troy, did a good job as the films main villain, even though technically anyone possessed as a soul is seen as one, she is the one going after Wanderer with a determination unlike the others.  She has little things about her, little things that bring the character to life in a real way.

The setting and visuals were great.  The Seekers are all in white and metallic vehicles, which is different from the book but it fits them better I think.  Clean and perfect.  The desert.  Natural and dry but stunningly beautiful to look at, from the comfort of an air conditioning for me.  Pure untouched nature.  The cave.  Grand and amazing, I know it was a set but still there really are places like this out there, Google it, nature is an amazing thing.  Finding a place, a safe haven, and making it work for you.  Now the first thing you see it's the cover of the book, the eyes.  The way you can tell human or soul.  I love the eyes, I'm sure those contacts would be a pain to wear but they are beautiful.  I also wondered how they would make the 'souls' look in their true state, would they be slimy worms or centipedes?  Much more beautiful, better than I expected, I wanted to reach out and hold one.   Visually the whole movie was dazzling.

The story is the book so of course it was fascinating.  Seeing a sci-fi world where aliens have taken over but everything is peaceful and happy, but still not human.  Fighting for love, for choice, for survival.  Never stand down.  The movie brought all of that out and then some.  Living on your own terms and not as a shell.  There was a bit more action in the movie than the book, but that is because we got to see more than just Wanderers POV, we got to see others as well.  They also sped things along, there were some things in the book that worked really well on page but to put that in a movie with that much…it would drag it down.  They hit all the major scenes and the little things they changed I was honestly okay with.

So if you liked the book, you must go see this movie.  I don't think you will be disappointed.  If you haven't read the book and you thought the trailer or the premise sounded interested then see it and give it a fair shot.  It is from the author of Twilight and that is great for some but don't let that be your deciding factor.  I saw it twice in 24 hours and honestly cannot wait to see it again, if that is any indication.   Now I want to know, have you already seen it?  Plan to see it?  Questions, comments leave them below.