So I'm a bit behind, as usual but in my defense I've been recovering the last few days, I am now free of my annoying glasses.  Yep I bit the bullet and let the doctors laser my eyeballs, clearly they gave me drugs to make it happen so I didn’t freak out like a ninja. 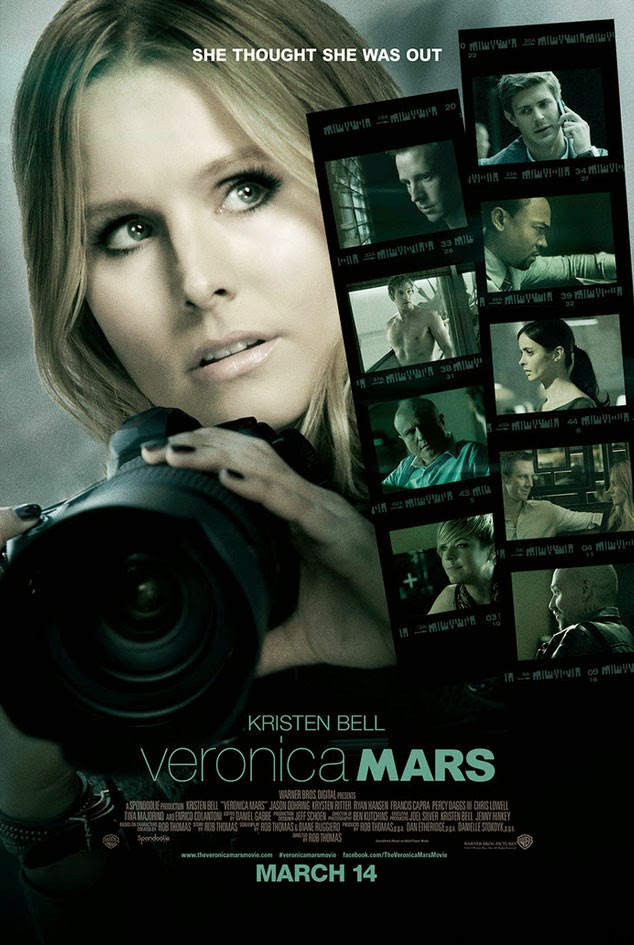 Anyways I had been super excited for this movie ever since I heard it was officially happening.  Thank you fans and kickstarter.  I loved this show and it hardly seems like 10 years have passed.  To prepare I did marathon 3 seasons of this funny and addictive show.  I was breaking Veronica Mars.  To get back in touch with my character where they left things.  Now there were no showings near me in the limited release, and I was devastated.  Then as I happened to be on the phone with my mother at the time, she was checking movies to watch with dad that night and mentioned she saw it was listed On Demand…I was in shock and quickly snatched up my own remote hoping my provider also had it available and score they did and cheaper than a movie ticket.  So I lucked out got it cheaper than a ticket and got to watch it from the comfort of my own home in my pjs with real food.
Also for people who might not know after the show was canceled on the season 3 DVD the producers put the season 4 pitch, this mini start of the show that kinds tells where it would be going.  Post college and FBI academy first day with the FBI.  Well the trailer made me wonder…things ended different for our teenage detective.  With that in mind I do think not knowing anything about the show you may be lost in part of the joy and intrigue  This movie was simply put, made for fans of the show.

9 years later, Veronica has escaped Neptune and that life and has created a new one for herself.  When Logan needs her help and she can't resist the pull.  Just a quick visit to help an old friend before starting her new job and life with everything going for her, right?
We have all our favorite characters from the show.  To name a few, Veronica, duh, Logan, Daddy Mars, Wallace, Mac, Dick, Piz, Weevle, Vinny, Sacks, Leo, and so many more.  A reunion or our people, literally at the Neptune High 10 year reunion.  Whatever happened to all those 09ers, PCHers, and everyone else?
What I loved about this, aside from seeing my characters back together in Neptune, was how it felt natural.  It's been 9 years, they have each changed some as everyone does over time and as you grow but at the core they are still the same.  They kept that essential quality that made them, who they were and who the fans loved.  So with veronica being the trouble magnet that she is clearly trying to get back in the saddle for a farewell case, one last gig, will spell trouble.  Old tricks of the trade with new knowledge and in a town that is the epi-center for the class war with the rich 09ers and the poor.  What's a girl to do?  And can I mentioned seeing Logan in uniform, ummm…hello an hit pause for a moment.
The only bad things I can say about this really are simple.  The first which might have been only be a problem with my provider, I wouldn’t be surprised, was during the club and party scenes the music was so loud it drowned out the conversation no matter what tricks I tried with my volume.  The other were some small changes that yes over time you expect change but new home, new offices, jobs (again Logan in uniform people), a little explanation as to how they ended up there would have been nice.  Maybe it is just me being a needy fangirl but I wanted a bit more details on our beloved characters.


Overall I give it 5 Marshmallows it was similar to the a season, condensed in a single movie.  Full of all the stuff the fans love.  I have watched it a handful of times and can't wait to see it again. What about you?  Have you seen it?  Were you a fan of the show?  What were your thoughts?  Please share below.
Posted by Eve at 5:41 PM