Today is another exciting day for me as a reader.  I get to host an author interview for a book I loved, what can be better.  I mean aside from instantly becoming a billionaire who could quit my job and devote as much time as one wanted to reading, writing, baking, etc…so until then my next best thing.   I got to interview Colette Ballard who wrote Running on Empty and is getting ready to celebrate the release of the paperback version, May 6th (that's in 2 days people).  So enjoy and don't forget to pick up your copy.

How would you describe Running on Empty in your own words?
When River kills her boyfriend in self-defense she must leave everything behind—including the boy she'd do anything to protect.

Simple and intriguing, I love it.  Did you have a particular source of inspiration for this story?
Just an insane love for my characters and a desire to write this story.

Your book has been out for a while and the paperback version is getting ready to come out.  Has being published changed anything for you?
Yes, it came out digitally at the end of November 2013.  Print comes out May 6th.
I find it a challenge balancing social media type promo and all things dealing with ROE, while simultaneously carving out time and staying focused on writing the next book.

Running on Empty takes place in a small judgmental town, where its pretty much who you are or who you're close to.  I have lived in an area much like what is described, and ironically worked for law enforcement on the civilian level, and feel it was captured particularly well.  Did you grow up in a small town where people had an opinion about you before they even met you?
I did grow up in a small town and it's true that news travels fast.  But I think that no matter where you live people often judge each other before they really know them—whether it's by the clothes you wear, the vehicle you drive, or the company you keep.  I think in a small town, people just know your name and face more often so the judgments are perhaps quicker.  That said, after moving a few times I moved back to the same small town I grew up in so obviously it works for me.  J

True, I can see that now and I didn’t get to far away myself, not yet.  For me the strongest thing in this story is friendship.  Two best girl friends who go on the run to save their friend.  Sure they weren't leaving the lap of luxury but there is a solidarity there.  Do you have any people you would go on the run for/with?  Or who you think would do the same for you?
Now that I have kids, I think my answer would be different because I wouldn’t leave them to go on the run with a friend.  But pre-kids probably.  I am very fortunate enough to have a few amazing friends I know I could rely on in a crisis and who know they could rely on me.

Oh yes well kids would change things, but its good to know you have those kinds of friends.  And if you did go on the run, what charge would it be?
Ummm…I'm not really planning on breaking the lay anything soon.  But if anything changes, I'd probably keep that one to myself. ;)

Oh yes, I would plead the 5th too ;)  Speaking of the relationships in this story.  There was a good balance of healthy relationships and then the clearly not so healthy ones.  What are your thoughts on what makes people get in/stay in unhealthy and destructive relationships?
I'd say the bottom line is lack of self-esteem.  Often, I believe, the manipulator senses that and it's how they're able to get away with things.  Manipulators are smart enough to offer that person something they're not getting anywhere else—or at least the appearance of it anyway.
In River's case, she didn't feel loved and she craved what she thought was Logan's attention and love.

I already mentioned that friendship is a major part of what wrapped this book in my heart but there were so many other things in it for me.  The battle to stand up for oneself even when the odds are against you, who doesn't love a good underdog story, or is power and money more powerful than truth and justice to name a few.  What do you want readers to take away from this beautifully written story?
That there's home in every situation.
That true friends will stick with you through the good and bad.
That sometimes you have to learn to give yourself what no one else can—unconditional love.

I can see each of those things shining through in the story with so many more little things as well.  For me I love a good story, but it has to have characters I invest in, like River, to enjoy.  What came first for you?  Was it the idea of the story itself or with a character and the story flowed from there?
Cliché as it sounds, this story started with a very vivid dream where three teenage girls were running away.  It was so intense I couldn't stop thinking about what would possibly cause young girls to make such a dramatic decision.  I came up with the answer fairly quickly and then began to build the story and characters around it simultaneously.

I can't say anything there my dreams are beyond crazy and sometimes I can't help but wake up and think, wow I have to write this down it would make an amazing story.  Dreams are the imaginations playground.  Speaking of characters…if Running on Empty was being made into a movie and you could cast anyone to play the characters who would you pick to play River, Billi Jo, Kat, and Justice?  And anyone else you want to share ;)
River:  looks-wise, there's an actress in the Blake Shelton music video, She Wouldn't Be Gone, that I think looks her—especially her amazing Siberian Husky blue eyes.

Billi Jo:  I haven't seen a TV personality who reminds he of her yet, but she does look like the picture on the profile cards on my blog.
Kat:  Megan Fox reminds me of her—she has her figure and green cat eyes.

Justice:  looks similar to the adorable actor on George Strait's video, The Seashores of Old Mexico.  Except Justice is a little taller and lankier.  He also reminds me of the actor on Smallville.

Charlie:  Robert Duvall has always been in my head for him.  He's one of my favorite actors of all time!

River's fake dad, Jack:  Sam Elliot I a dead ringer from him (the way he looks and acts in the movie, Prancer.) 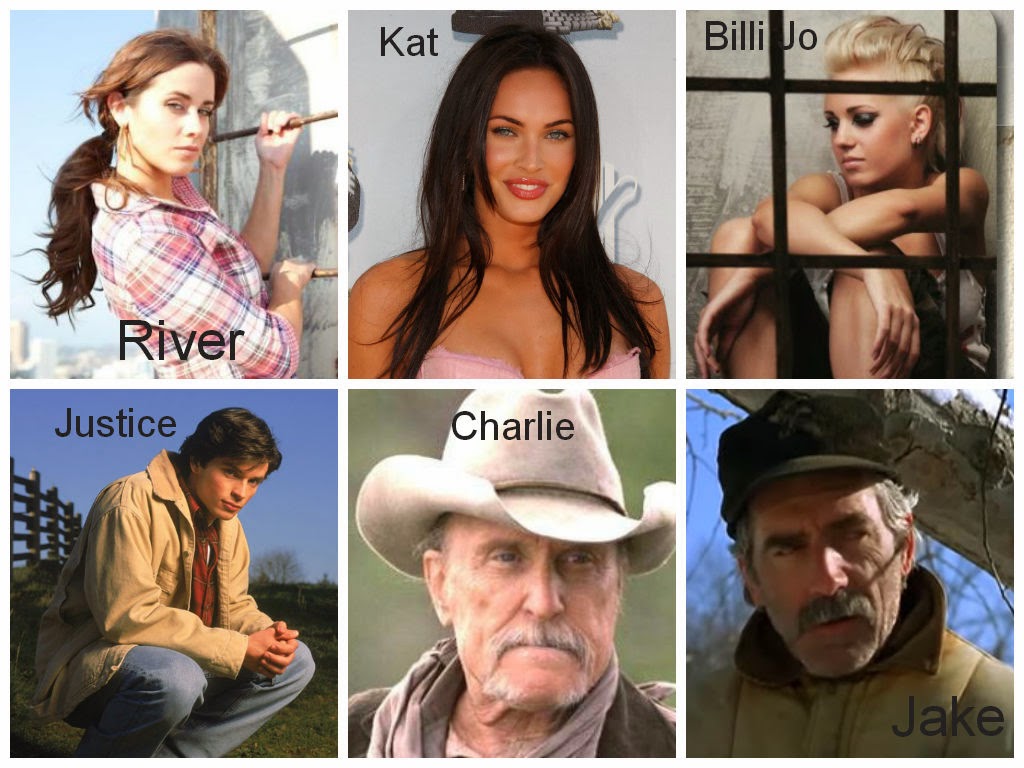 What type of books do you enjoy reading?  Favorite author, series, or genre?
I love to read YA, but also contemporary adult fiction, romantic, suspense, even historical.
My favorite author is S.E. Hinton.  She writes the most amazing characters and voices!  The Outsiders is my favorite book of all time.
I also love Katie McGarry's books, John Green, Trish Doller, Simone Elkeles…many more.  I'm a character person and these authors do a fabulous job making their characters come alive!

I'll have to look them up, my TBR list just expanded.  Do you have any new books kicking around in your head waiting to be written and shared with the world?
Always!  I'm excited to say that I'm writing Kat's story and am loving it.  She is such a tough, complex character, so it's lots of fun.

Glad to hear and I can't wait to read Kat's story.  I will have to keep updated on this so I can stay on top of it.  Thank you so much for taking the time to do this interview and I am anxiously awaiting ordering my physical copy of Running on Empty Tuesday May 6th.

Great questions!  Thank you so much for having me on your blog today—I really appreciate it!  J

Now to all of my readers, would you like your very own copy of Running on Empty to read?  I am hosting my very first book giveaway!  In honor of the paperback release that is the format I plan to deliver to the winner,  and me being me some baked deliciousness.   How do you enter this giveaway, well that is simple, below is the nifty little do-dad from Rafflecopter.  There are more than one way to get entries so do as many as you can/want before the close date.  As the release of the paperback doesn't come out until Tuesday May 6th, and I want people to have plenty of time to check this out, I'm leaving it up and open until next Sunday (Mothers Day).

a Rafflecopter giveaway
Posted by Eve at 9:32 AM