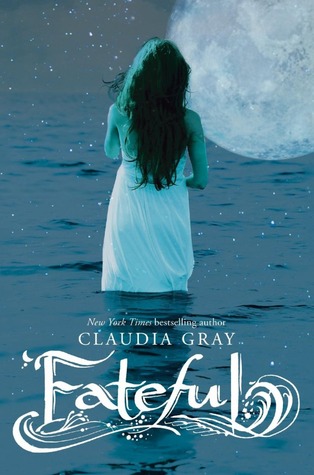 It's Friday, you survived another week.  Can we take a moment to discuss where did 2015 go?  I swear it was just starting and now it's only 21 days until Christmas and almost 2016.  Time does fly.  I've almost reached my 100 book goal for the year, seriously I'm at 99 books now and I have 5 I'm currently reading so something will finish soon.  Now back to what you're really looking for, the review of course.  Today I'm going to discuss my thoughts on one of the Goodreads group read-along, Fateful by Claudia Gray.

Fateful simply is Titanic meets werewolves secret society.  We follow Tess, a maid for a family she has served for years and has left some painful memories, as they set off for the RMS Titanic the height of luxury travel.  She has big plans when she reaches America, all she has to do is survive the trip.  Soon she meets Alec, the handsome upper class passenger whom she falls for rather quickly.  Alec, while not caught in the status war has his own secrets and soon they pull Tess into the dangerous world.  She becomes a pawn for the brotherhood, the brotherhood that will do anything to make Alec a member before the ship reaches its destination.  Their budding romance is full of trials and dark forces pulling them apart and that isn't all as the fate of the Titanic is well known.  Can they make it through?

I really liked this story.  I admit to having watched most of Titanic on TV not to long ago as it was on and I got sucked in only meaning to watch one little part and then a few hours later, because yeah it's long…So seeing some similarities to that was nice.  I could picture every opulence described, the details of the grand rooms and the ship specifics of course.  I was right back in the movie.  There were other details as well that added even more depth to it and was clearly well researched.  There were references to real passengers on the ship in passing and even a brief cameo by the designer himself.  It was beautifully done.  I was there. 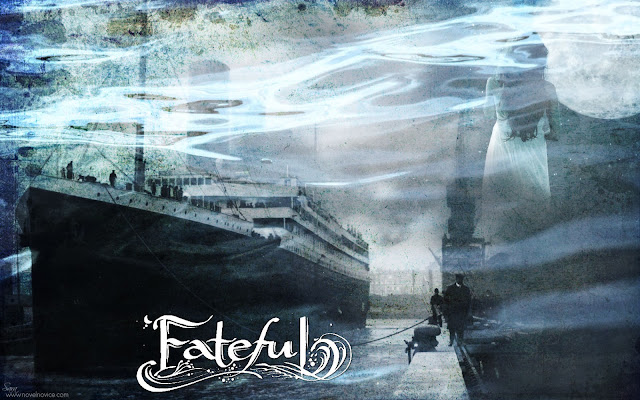 Tess was easy to relate to.  Such a horrid employer, sure there was one decent family member but still I still don't know if I could have managed to not strangler her in her sleep.  A royal witch for sure.  Her past with them and her pans to escape, you want to join with her and wish her well.  Still she has been marked and accosted by some strange first class gentleman in the time where his word would always be taken over hers, the idea is so baffling it's scary.  Still she strides to keep her head up and do her job.  She has a strength of character I enjoyed.  Alec was very similar.  He was on my good side from the start, handsome and upper class but not pretentious.  He got huge points there.  He is forced to come clean to Tess about himself but never once does he try to threaten her or bribe her, simply speaks to her like a person.  He's haunted and who doesn't love a handsome stranger with a haunted past?

The relationship between them happened fast yes but good fast.  She was attracted to him from the start which is expected but she doesn't instantly fall in love with him, just like.  Their feelings build as they are forced into this dangerous trip full of secrets, stealth, and several near death experiences.  Lots of things are happening and I was never bored.  Aside from the romance aspect there was several other things going on and the side characters each had their own personalities and I became invested in their lives as well.  The brotherhood was also interesting to learn about and the count.  So many different sides to characters!

The ship sinks.  Spoiler!  Seriously though if you don't know the Titanic sinks where have you been?  That only leads to more chaos as one would imagine.  Reading how the ship sank how our characters struggle with everything and trying to stay alive and get off the ship in the midst of it all.  I really enjoyed the story and even knowing the ship would sink I was still shocked up until the moment it happened because well one I didn't know the date it sank or how far into the journey and two there was just so much other things happening I almost forgot about that little tidbit.  Clearly I was enthralled in the story.


I highly recommend this book.  I'd love to hear your thoughts about the book below.  What did you think of the book?  Would you have joined the brotherhood?  Did everyone you liked survive?  I would love to discuss this one so leave me a comment below.  Stay tuned for my monthly book haul tomorrow.