Deliverance~ The Conclusion to a Series

Happy Monday!  I had a very interesting weekend, I finished a couple of books, watched some movies, and tried sleeping off a possible on-coming cold.  So far so good there.  So real quick there is still time in my open giveaway for a signed copy of The Rose Society by Marie Lu, here.  Don't forget you can get one entry each day for just tweeting about it!  Now you may remember I mentioned that I was near finishing a series I started back in 2015, Defiance or The Courier's Daughter trilogy by C.J. Redwine.  I previously reviewed Defiance and Deception if you want to catch up there.  I have also finished the last book, Deliverance and can't wait to share my thoughts with you.  If you haven't finished the first two books there will be spoilers for those two. 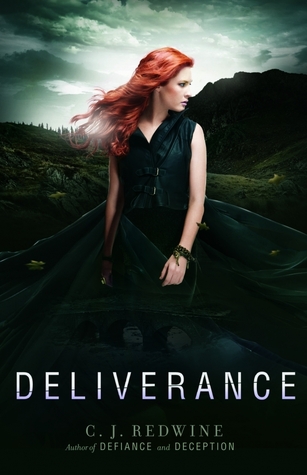 When we left off in Deception things were bad.  Really horribly bad.  Logan was incarcerated with Willow with two parties wanting him and the device both willing to destroy the city to get their way and both stopping him from going after Rachel.  Rachel who was injured and taken by Ian who has a serious rage hate going for Logan wanting him to suffer and hurting Rachel is a good place to do that.  Rachel is fighting for her life trying to escape at any opportunity but as she learns a secret that could put everyone she has left at risk she must hatch a new plan.  Logan our master of plans and last stitch schemes must join forces with the one man he has sought to kill since childhood.  At least until he can take down the larger threat. The enemy of thy enemy is thy friend they say.

So I was a bit of a wreck through a majority of this book.  I did not in the least like Rachel in Ian's custody but even less as she was injured and not able to fully defend herself against his cruelty.  Thankfully we have Samuel there who is not the most likeable guy but at least he has a strict set of we'll call them morals and is determined to make sure Rachel makes it to the destination without Ian killing her.  I did almost grow to like him and I enjoyed getting to know a somewhat sane person from Rowansmark.  This book was rather dark, with lots of violence and pain happening.  Now the other two books aren't rainbows and sunshine by any stretch but this one seemed more vicious to me, maybe it was that it was the end and our MC's were in the thick of it and really struggling with everything but yeah it was serious.

One aspect of this book that I really enjoyed was getting to see more of the world.  In Deception we moved in not only more of the Wasteland but also into Lankenshire which was progression.  In the conclusion not only do we get those but we also get to travel to Hodenswald, Chelmingford, and the evil power of Rowansmark.  I loved the travel and getting to meet different heads and seeing how everyone interacted not only with the Commander but with Logan and their band of unlikely allies.  I also just adored that Connor came along and kept on the journey with them.  He was one of my favorite new characters because well, he was kind of a book nerd and he spoke so well and with such purpose and poise that I just kind of swooned for him a bit.  He was a bit of a weakling in the more physical aspects but he could lay a verbal beat down like no ones business.  Such random awkward spills that come out of his mouth just loved him and he was the perfect Lankenshire ambassador.

Rachel in the last book was in a very dark place.  She was making decisions and going down a path of revenge and letting nothing or no one stand in her way.  Others were hurt in her blind and sometimes suicidal quest and she didn't care, any cost would balance out if the Commander died.  Quinn, oh wonderful Quinn, took it upon himself to try and make her see things clearly.  That the pain inside bottled up was not helping her and she had to choose to feel to let it in to be able to move on.  That struck true and as much as her stubborn self didn't like it, given what Quinn scarified for her she knew he was right and she turned a corner.  Seeing her whole journey through the books was amazing.  She grew so much and there is a specific moment in the book that basically sums it all up and when you get to it you will know it.  Seeing her in even more dyer circumstances than before but more determined to make it and move through it was beautifully written. 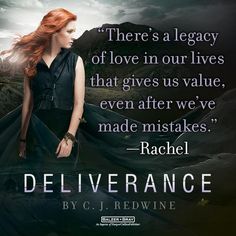 Logan is also forced to come to terms with his own issues.  He feels he is a failure and that most things can be traced back to him in some form or fashion and how can everyone not look at him and see that.  He also has to work with the man he's wanted to kill since he was but a child, brutally orphaned.  I really enjoyed watching him continue to work his wonderful mind and try to see every possible outcome and grow more confident in his choices for his family.  When he makes a stupid and crazy decision that goes against the odds and rational thought, soft for women, it was so very Logan.  Also his scenes with Willow, just loved them.  She warmed up several degrees since we first met her.  She is still everything we loved about her but she also has some softness.  As Rachel is with enemies Logan is with, well technically enemies and friends, but he has that group that support system.  We got to see more of Jodi, Adam, Nola, Smithson, Frankie, Drake and so on.

Everything was so beautifully written from the characters and the world to the pain both emotional and physical it just came off the page.  I cringed so many times throughout because while I knew it was just a book I still was so invested in the outcome it felt real.    I just loved it!

I highly enjoyed Deliverance as a book and as a conclusion to the series.  I feel it wrapped up the storylines in a strong finish and also left the world there rip for another story maybe sometime in the future.  Also I should point out after finishing this book I found out there was a Quinn/Willow novella from when they were still with the tree people called Outcast available on kindle which I can't wait to read.  In case you didn't know about it I figured I'd help you out!  Anywho that is all for me today, I would love to hear your thoughts on this series in the comments below.