Elementals: The Prophecy of Shadows

Hello everyone!  Today I'm taking part in a release tour for a new book, Elementals:  The Prophecy of Shadows by Michelle Madow.  I previously read and reviewed her title Remembrance (here) and enjoyed it and was looking forward to trying out this new series as well.  I received an ARC of this book from NetGalley and the publisher for an honest review.  So check out some information on this title, the author, my full review, and then at the bottom a giveaway that is being hosted by Michelle herself! 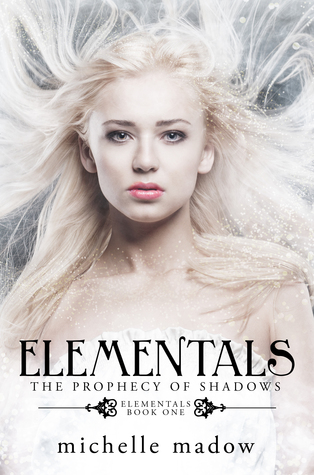 Filled with magic, thrilling adventure, and sweet romance, Elementals: The Prophecy of Shadows is the first in a new series that fans of Percy Jackson and The Secret Circle will love!

When Nicole Cassidy moves from sunny Georgia to gloomy New England, the last thing she expects is to learn that her homeroom is a cover for a secret coven of witches. Even more surprisingly … she’s apparently a witch herself. Despite doubts about her newfound abilities, Nicole is welcomed into this ancient circle of witches and is bedazzled by their powers—and, to her dismay, by Blake—the school’s notorious bad-boy.

Girls who get close to Blake wind up hurt. His girlfriend Danielle will do anything to keep them away, even if she must resort to using dark magic. But the chemistry between Blake and Nicole is undeniable, and despite wanting to protect Nicole from Danielle’s wrath, he finds it impossible to keep his distance.

When the Olympian Comet shoots through the sky for the first time in three thousand years, Nicole, Blake, Danielle, and two others in their homeroom are gifted with mysterious powers. But the comet has another effect—it opens the portal to the prison world that has contained the Titans for centuries. After an ancient monster escapes and attacks Nicole and Blake, it’s up to them and the others to follow the clues from a cryptic prophecy so that they can save their town … and possibly the world.
Buy Links:  Amazon  |  Barnes & Noble  |  Kobo  |  iBooks 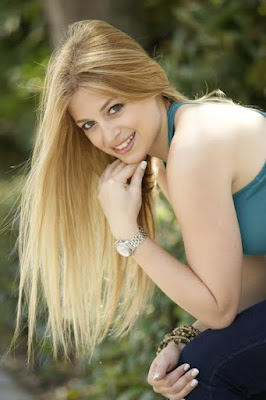 Michelle Madow grew up in Baltimore, graduated Rollins College in Orlando, and now lives in Boca Raton, Florida. She wrote her first book in her junior year of college, and has been writing novels since. Some of her favorite things are: reading, pizza, traveling, shopping, time travel, Broadway musicals, and spending time with friends and family. Michelle has toured across America to promote her books and to encourage high school students to embrace reading and writing. Someday, she hopes to travel the world for a year on a cruise ship.

To get instant updates about Michelle's new books, subscribe to her newsletter and follow her on Amazon!

I didn't know a whole lot about this story going in just the summary.  I have shamefully not yet read the Percy Jackson books, though I plan to correct that in 2016, I did read The Secret Circle (or at least the original three books) and enjoyed them.  Plus I did enjoy the Percy movies and love Greek mythology, probably the only part in history class I ever paid attention to.  So I was ready to dive in.  Our MC Nicole is moved from her home she knew and loved to a completely new place where she is alone.  That sucks and from the start you feel for her, I know as a Navy brat growing up and moving all the time it always sucked going someplace new and leaving all your friends and having to make new ones.  Day one new school going into class and something crazy happens, the teacher starts to do magic and tries to convince her she's a witch.  While she thinks everyone in the class has lost it there is nothing to do but sit through it.  Until she starts to feel the magic and starts to believe them.

Now the class is full of the usual suspects you find in every school and most welcome her into the coven, though Danielle is a bit hostile.  Though she doesn't like anyone whom looks at her man, Blake, and has been known to break the law using dark magic to mark her turf.  Still knowing this Blake and Nicole seem to pull together despite everything.  She is a bit cray, like mean girls on crack level crazy possessive.  While a large part of the story does seem to focus on the triangle there in our group we also have Chris and Kate whom I enjoyed.  Kate was more of the level by the book gal and Chris is fun and energetic and made me laugh several times.  I did find the insta-connection to be a bit on the nose but as this is a story with magic and prophecy you can get away with some things, magic is a crazy thing after all.  I did even enjoy that Nicole didn't want to get involved or even like him based on him having a girlfriend, not that she was scared but that she didn't want to be that girl that went after a taken guy.

The hormones were a bit amped up and I did feel maybe a bit too much Secret Circle vibe in some parts and it does have some clichés but overall I really enjoyed the story.  Everything is fast paced and constantly moving.  You fly right through from one thing to the next and while it was predictable it was still fun and that is what I wanted.  I did really enjoy the take on witches and how they have their powers.  I'm ready to continue on with the series and know more about where our group ends up and how things progress because the end got kind of dark with lots of things.  I have hopes that the sequel which already has a title, cover, and release date will improve on a good start.

I'd love to hear your thoughts in the comments below.  Don't forget to take a moment and enter the giveaway as well!

Rafflecopter for Release Week Blitz Giveaway:
Michelle is offering up a fabulous prize during her Elementals: The Prophecy of Shadows Virtual Tour event. One (1) lucky winner will receive a Kindle Fire 7”! To enter, simply fill out the Rafflecopter below: