Hello happy movie fans!    There haven't been a ton of movies I haven't seen already so this week the list is a bit short.  That said here is what I’ve seen the last two weeks: 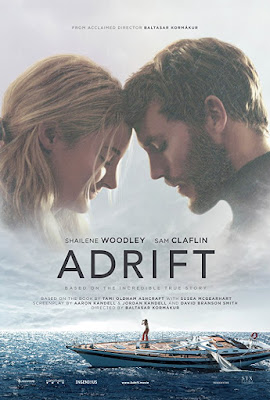 Adrift:  4 Stars
So this is based on a true story.  A love story that turns into a nightmare, adrift on the open ocean after a horrible storm trying to survive.  I knew the basics of the true story before I saw it so things weren't really a surprise to me.  From the story I knew and the trailer there seemed some vast changes which had me concerned for a brief moment but I had a feeling about that and I turned out to be right.  I was concerned I would end up crying at some point because it is an emotional film but I don't know if it was knowing the story already or the way it was shot but I managed to not cry.  That's not a bad thing mind you and the back and forth story telling really worked to keep things moving along in a natural way without having drag time in the length of time spent adrift.  I am happy I went to see it and the performances were beautifully done.  It also erased any desire to go sailing where I can't see land in the distance.  Just saying. 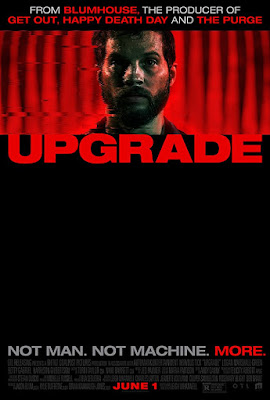 Upgrade:  4 Stars
Okay so this movie was a shock for me.  I went in thinking it would be a popcorn sci-fi action flick.  It was.  Still it was much better than I imagined.  I didn't expect to like it as much as I did.  It had more going for it than the action and sci-fi elements.  The MC (Logan Marshall-Green) does a fantastic job of making you feel along with him and as many of the conversations take place with him alone that takes some skill.  I had a Tom Hardy feel through most of the movie.  The premises is way out there but the idea that you would be paralyzed and witness your wife's murder and given the chance to find the killers and be given mobility again….with an upgrade is something that is easy to follow and understand.  I am always fascinated when they find a way to make an AI seem real and into it's own character as STEM works to help Grey solve this.  Still while the movie had a predictable nature to it they still managed to through in some shocks and some pretty cool fight scenes which are always fun.

What movies have you seen recently?  What should I see?  These next week's I’m super excited to see Oceans 8, Hotel Artemis and Tag for sure.