Hello happy readers!  I hope you all enjoyed your weekend.  I did some baking and house stuff, nothing glamorous but I am starting to get my books together for ApollyCon!  I've just checked a few of the titles really but I'm near giving up my dining room table to start stacking and such.  So excited.  Back to the post at hand, Friday I finished an ARC from NetGalley of Daughter of the Pirate King (Daughter of the Pirate King #1) by debut author Tricia Levenseller.  This book comes out February 28th and I highly recommend picking it up. 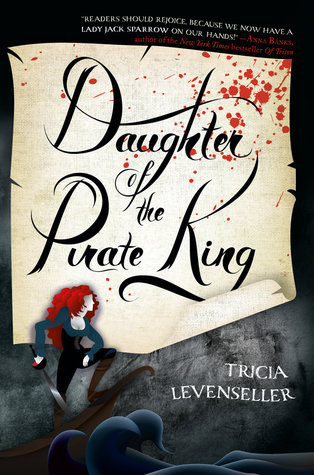 I was first drawn to this cover with the beautiful font and the red headed armed female at the bottom who looked ready to do some pirating.  Then once I learned more about the premises I was hooked and even more thrilled when my request to review it was answered!  Basically we follow 17 year-old pirate captain Alosa, daughter to the Pirate King, as she is captured by enemy pirates.  Though this was all part of the plan, see she isn't some captured victim but really using her "capture" to search the enemies ship undercover.  However, as with any well thought out plan there are bound to be some snags along the way like underestimating the first mate, Riden, who keeps her on her toes.

Doesn't that just scream interesting.  Let me say it is!  I was enthralled from the start and loved Alosa.  While I didn't always like how she did some things or her reasoning for others I understood her and her motives.  She is cruel when she has to be, this is a man's world after all, but she isn't cruel for the sake of enjoyment as others may be.  She has her own code.  I do enjoy people with codes (Dexter had a code, yes he was a serial killer but he had a code) and morals.  Plus what girl wouldn’t cheer for the daughter trying to make her way in this world of men and best them.  Alosa is able to get down and dirty when necessary though she is much more civilized and cultured.  She has to walk a fine balance and keep her real and full self and abilities from the crew while she plays the victim.  Though given her abilities and, yes pride, playing weak is a bit harder than she thought.

We get to know the crew that's taken her.  Like one would expect it's a miss-mash of personalities.  Some with honor and others more brutal.  Balancing between them while giving just enough away is a fine game and watching Alosa go toe to toe with Riden was amazing.  Riden from the start seems like an interesting character with a very complex personality.  He has so many conflicting opinions and actions it's impossible to nail him down.  The back and forth between them building as they try to figure one another out was enthralling.  Enemies who get closer are something I enjoy for sure but the best ones have to be able to go back and forth verbally at one another with witty zingers and Alosa and Riden have that in spades.  Sometimes more than verbal volleys because well they know how to keep it interesting. 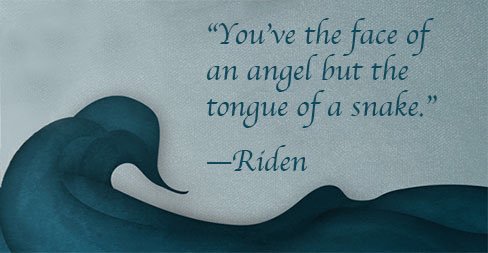 The overall plot of trying to find this hidden item and bring her captors to him was fascinating but also not even the half of it.  There is so much more happening that is just evolves so nicely into something much larger and expansive.  This book ties up in a way that you feel like you've reached a certain point but also where there is a ton more to learn in this world.  There were a few things that I saw coming and others that completely blew me away but when thinking back I could totally see the breadcrumbs.  It was beautifully written and an amazing debut for the author as well as for a series.  I can't wait to get a physical copy when it comes out next week!  I highly recommend this one.  It has something for everyone to enjoy and so many reveals and things that will just knock your socks off!