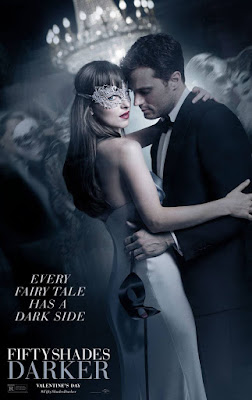 Hello happy readers!  So as most of you know Fifty Shades Darker came out this weekend.  Love it or hate it chances are you have seen it everywhere.  I am on the love it side.  I have my own random story on how I finally read the series which can be found here and I also reviewed the first movie here.  So I was excited and eager to see how they would do book two of the trilogy.  These are my thoughts on the movie in general as well as my thoughts on some of the variations from the book.

First let me say I really enjoyed the movie.  I really did.  I enjoyed the first one for sure but this one seemed even better.  There was more happening in the story with suspense but we know the characters now and they could really add in some humor.  Plus the dynamic between Ana and Christian is on point with her still unsure but having more confidence in herself and what she wants and can handle while he is suddenly unsure on new ground.  The turn is rather fun.

As a book to movie adaptation it was pretty true to the material.  It had most of the scenes those who read will remember and enjoy from the boat to the masked ball.  I adore masquerade masks, I have several so watching balls always makes me envious!  When we left off, Ana had left.  She was in love but she couldn't handle what he needed.  Still both were hurting and Christian, having lost her, is willing to make changes to get her back in his life.  Changes have to be made but with the looming threat of an unstable former submissive and a new job and a boss that brings out the overprotective side of Christian it puts a strain on this new ground they are trying to cover.  Still I enjoyed it.  The movie didn't take itself too seriously and there were lots of little quips and zingers that just had me laughing.

Now for a couple differences.  Christian of the movies is a bit more compromising and agreeable than that of his book counterpoint.  This seems more real to me.  In the books, while I enjoy them it can be a bit excessive sometimes his control this tempers in the movie.  I like this better, however, there were a couple moments when I think he was a bit too agreeable to quickly and it lost some of the dramatic effect.  First was when they are talking about trying again, no rules or contracts just together.  They don’t really talk about what happened.  She tells him her thoughts and he just states he is over it and wants her more than that no calling her out on not using a safe word or stopping him.  I felt that was a moment in the story where they were both open and he seemed more, agree to anything to get her back.  The other part is touching.  His no go area.  It’s important and major but then as he lets her it’s just fine like that no adjustment or adapting to it seemed resolved to quickly. 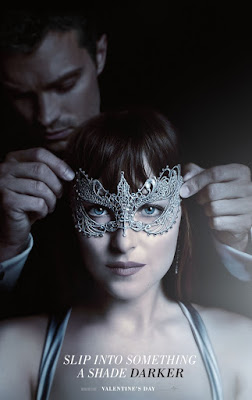 For time and such some things were cut, though I was sad that one scene I saw a glimpse of in the trailer wasn’t in the movie itself.  They didn’t shoot pool which as I like to shoot pool and I am conspiring to get one of my own to play more often now that I have some space I would have liked to see that moment.  Plus that meant more of Escala since we didn’t get a tour.  Still waiting to see the library though.  We also cut out Ethan and Dr. Flynn completely.  Ethan I get.  I was somewhat saddened by Dr. Flynn though he was rather fun in the book and he gave insight into relationship.   Just saying.

I enjoyed it and I do look forward to seeing it again and even more watching the next and final installment next year.  Speaking of, not a spoiler but a heads up, stay for the first song in the credits you get a peek at Fifty Shades Freed.