Hello happy movie fans!    These last two weeks haven't held many movies.  Mostly because the only one I was super excited for the theatre had issues and I only got the see the first half of it and had to rain check it to see the whole thing.  Which was a bit annoying but worked out in the end.  Then I must be old or something because my back started to hurt something serious and the idea of sitting in those seats just wasn't something I was excited for and with movies I wasn't dying to see it was just let go.  But my back is better now and my one good friend is officially off in her new home far far away and I managed to squeeze in a few more hours hanging out each day than I thought so I say a win!  So what one movie did I see… 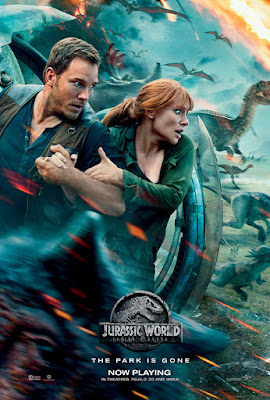 Jurassic World:  Fallen Kingdom - Rating:  5 Stars
I really enjoy the Jurassic Park movies.  The originals are great fun, more 1 and 3 I honestly don't remember 2 that well.  That said I loved the reboot how it was years later and of course people wouldn't let that idea go but this time it was successful and working…until they go and do something stupid like make a new dinosaur with all these deadly things in one.  I was excited to see where it would go from there.  So seeing a sequel was coming I was stoked and the concept behind it was fun.  I really enjoyed this one.  I liked the idea that people were fighting to save the dinosaurs.   In this world an entire generation have grown up with living dinosaurs so the idea that they could be gone is pretty unique.  The story is fast moving and has lots happening in it and it even includes a few hilarious moments that are more inside jokes which I loved.  The dinosaurs are beautifully done and the combination of real effects and CGI blend together in ways they could be real and that is what make them amazing.  The production value on this is amazing.  I really enjoyed the story and the subplots going on in the story including the connections between the characters both human and dinosaurs.  It had the humor mixed in with all the action that keeps it moving quickly along.  I mean Chris Pratt is hilarious in this roll but the others have their moments for sure to lighten the mood in between the danger keeping you on the edge of your seat.  Plus they brought back Jeff Goldblum which was pretty freaking amazing if you ask me.  All in all it was an enjoyable ride and I look forward to seeing it again.

*****
What movies have you seen recently?  What should I see?  Right now the most anticipated releases are looking like Antman and the Wasp, The First Purge, Hotel Transylvania 3 (though I need to see #2) and Skyscraper.  I would also like to see a couple that are already out but ones like Sicario 2 I need to get to watching the first one before I can watch it.  All these sequels I wasn't prepared for.  Have to step up!