Hello happy movie fans!   I've had a good couple of weeks I have seen every movie at my local theatre except one as of right now but not to worry new movies come out tonight!  That said here is what I’ve seen the last two weeks: 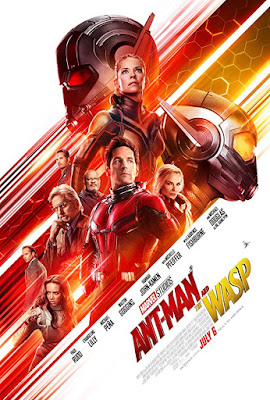 Ant-Man and the Wasp:  5 Stars
So first I just have to say you should see all the previous movies first.  Seriously they are in order for a reason.  There are spoilers for up to Infinity War.  Just saying be warned some people didn’t realize this and were confused and then upset they were spoiled for something.  Aside from that this movie is a much more light hearted film.   I really enjoyed it.  Hope takes a real central lead in this which I liked but it also seemed like the skills/brains of Scott were downplayed some.  I think it could just be his uncertainty with the dynamic after everything that happened so it never really hit me until after the movie when I was thinking about my thoughts for the review.  I think it was beautifully timed for the laughs and fun after we left off in Infinity War, because it was hilarious.  There was a lot happening with lots of action and a fast pace.  We got to know a few new characters but more important we got to know the others better.  The cast was phenomenal and did an amazing job and I really liked the effects they really have found a way to de-age for flashbacks that doesn’t look super cheesy and that is just the tip of the effects.  It was a huge treat and I look forward to catching it again. 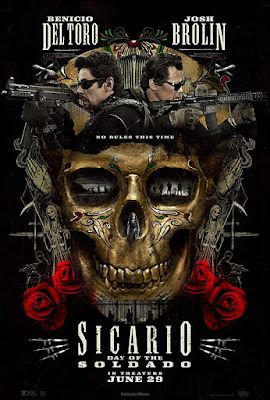 Sicario:  Day of Soldado:  4 Stars
I watched the first movie the day before.  I had never seen it but the sequel looks intriguing.  I don't know if seeing the first one was totally necessary to see this one.  I think they cover the idea of who he is and what his "team" does pretty well.  Though it did give more back story which I appreciated.  It was an interesting movie.  It had a lot of violence and such for sure but it also filled in some character work with a pretty interesting story.  It's something I am glad I saw but it's not the type of movie I see myself putting on again.  It's not a feel good movie you can always re-watch and that is okay it wasn't intended to be that. 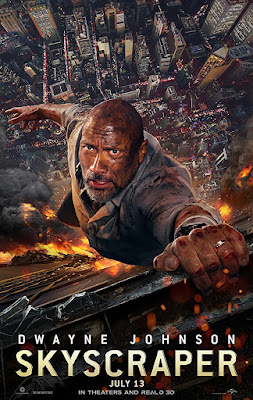 Skyscraper:  4.5 Stars
This movie is full of over the top action scenes and the rock being the rock and laughing in the face of reason.  And I loved it.  It was the huge action movie full of all the crazy stunts and action that you wonder how the person hasn't died of something by now in the best way.  It had a pretty easy to follow story behind the characters and I enjoyed it.  Everything is over the top and very predictable but I enjoyed myself the whole time, well minus the group who sat beside me and kept getting up and down to move seats and go get things and even checking tinder during the movie, seriously some people should just be banned from the movies.  Skyscraper is what you expect it to be and that is what I love about it.  Some action, cool scenes, and lots of little funny moments in there to keep it light and not take itself too seriously. 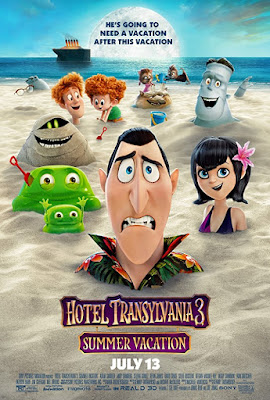 Hotel Transylvania 3:  Summer Vacation:  5 Stars
I only recently watched any of these movies.  I had never seen them but my besties kids love their "vampire movie" and we watched the first one while I was there one day and I really enjoyed it.  So of course I had to watch the sequel and be ready for the new one!  This one is super sweet full of the fun moments you are used to in the others with lots of laughs and fun but also a deeper and sweeter underlying message which I can appreciate.  It also has some hilarious music which is fun to bop along with.  I look forward to seeing it again with the bestie and her little ones! 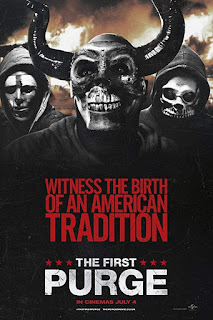 The First Purge:  4.5 Stars
The Purge movies are interesting to me.  Mostly because I've always found talking about the idea of the purge theory with people fascinating.  That said this is a good installment.  I liked the idea of showing how it started.  We see what it evolves into but to see the start and see how things went from an experiment into this huge dangerous thing….wow.  I liked the story here and I like that it brought up a different aspect to the purge than "murder night" because there is more crime than murder and it is at least addressed in this one.

*****
This was a pretty good week I actually saw everything at my local theatre but one movie as of yesterday.  What movies have you seen recently?  What should I see?  The next couple weeks I plan to see a couple more sequels, seems to be a theme, The Equalizer 2, Mamma Mia!  Here We Go Again, Unfriended:  Dark Web, and Mission:  Impossible- Fallout, which I am ready for having done a MI marathon of 1-5 this week!